Did He or Didn’t He? Fans Debate Fate of Aaron Hernandez 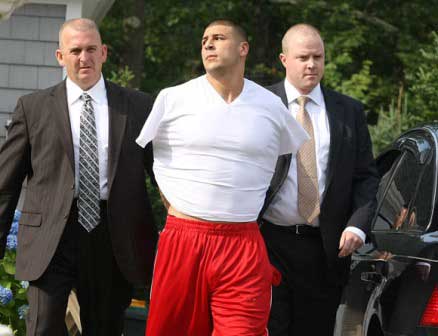 Aaron Hernandez’s once promising career could be over because of his recent arrest on murder and other charges (Photo courtesy of NewYorker.com).

As with any other high-profile murder case, speculation and accusations are through the roof. Did he do it? Did he not? How substantial is the alleged evidence?

With the New England Patriots wiping their hands clean of Aaron Hernandez, releasing him from the team and even going as far as allowing fans to sell back his jersey, fans seem to wonder what really happened and whether or not Hernandez is guilty.

“It’s unfortunate that a man with such a bright future could not go down the right path,” said 19-year-old Wesley Douglas. “He was definitely a lethal weapon for the New England Patriots.”

Prior to his legal issues, Aaron Hernandez had signed a five-year contract extension with the Patriots for $37.5 million and his career as a professional athlete was on the rise.

Now, he is currently locked in a cell and his professional career is in question.

“The New England Patriots (are) a great football team and by allowing fans to return their Hernandez jerseys clearly (shows) that they don’t want to be associated with him again for some reason other than the charges brought upon him,” said 23-year-old Clairmont Stanley. “Generally, a football team would try (to) hold onto their players as long as possible to see how things turn out but in this case they just cut him from the team.”

Investigators say the evidence that points to Aaron Hernandez appears to be strong, and many fans agree that this may be the end of the line for him.

“In my opinion, he is guilty,” said Douglas. “The reason for my statement is because only a killer goes through the trouble to have his or her video cameras destroyed, has the house cleaned of all evidence, and walks around the house with a gun.”

But not everyone is completely convinced that this case is a slam dunk for the prosecution.

“I can’t say that he is guilty or not because I believe in the saying that everyone is innocent until proven guilty,” said Stanley. “Whether or not he pulled the trigger, the way he reacted when the charges were being brought upon him only shows that he has something to hide.”

Whether or not the judge rules in Aaron Hernandez’s favor, and he is found not guilty, the stain of his name even being associated with a murder charge will hinder his career.

“This certainly has damaged his reputation as football player,” said Stanley. “It is definitely going to affect his career negatively whether things turn out good or bad for him.”

And the Patriots cutting ties is just the first step in a possible downward spiral for Aaron Hernandez.

“I think the Patriots allowing fans to return their Hernandez jerseys is the Patriots way of showing they are not supporting Hernandez,” said Douglas.

While the Patriots may be finished with Aaron Hernandez, that doesn’t stop the possibility of other teams having interest in the athlete.

Whether or not we will be able to see Hernandez on the field playing professional football again seems to be the real question.

“If he is found not guilty he probably will play again. He is not some average Joe. He is a Pro Bowl-worthy tight end,” said Douglas. “Some team, especially a struggling team will view him as a jewel as they can offer him a sub-par contract and still get quality play from him.”

While the investigation is still pending and Hernandez has not been convicted as of yet, his career has been on a downward spiral.

The Patriots have not been the only ones to cut ties with him, but so has CytoSport and Puma, both ending their endorsement deals with him.

No matter what the ultimate verdict may be, the association alone with this much media attention and evidence that many already find incriminating, Hernandez may never be viewed as the same athlete that he once was.