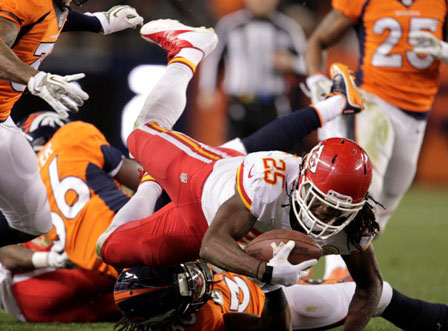 Running back Jamal Charles (25) will have to run through Denver if the Chiefs are to win the AFC West (Photo Credit: AP Photo/Joe Mahoney).

Weakness:  Running game: Knowshon Moreno is now in Miami, so Montee Ball will be given the first opportunity to be the every down running back. Ball had decent numbers last season in a shared role with Moreno, however the Broncos are counting on him and Ronnie Hillman (55 att, 218 yards) to keep Denver’s rushing average per carry above 4.0 yards (4.1 last season). The Broncos defense let them down in the Super Bowl, but they have surely made some additions to shore that up in DE Damarcus Ware (117 sacks w/Dallas) and CB Aqib Talib (4 INT’s in 13 games with New England). And they will get a full season from Von Miller, (played only nine games last season after starting every game his first two seasons) in the middle of the Broncos 4-3 defensive alignment.

Outlook: Denver will be a player once again at the end of the season. Scoring won’t be a problem for Denver. The Broncos averaged 38.5 points per game last season including three games in which they scored 50 points or more. While their defense only gives up 24 points per game, Denver fans only remember what happened in their last game in which Denver had only one offensive score, a 43-8 loss to Seattle in Super Bowl XLVII. The defense has to be better and it will with the likes of Ware and Talib at the key positions of defensive line and cornerback respectively. Denver needs to take the approach the Spurs took this past season in capturing the NBA title, redemption.

Strengths:  Running back Jamaal Charles anchors the Chiefs running game. Coming off another 1,000 yard season (259 att, 1,287 yards, 12 TD’s) Charles was given a contract extension this offseason and he gets more guaranteed money ($8.3 million). Quarterback Alex Smith has been steady for Kansas City putting together his most consistent season (308 com/508 att, 3,313 yards, 23 TD’s, 7 INT’s) and putting up an 89.1 quarterback rating. The Chiefs are looking for consistent play from the tight end position, and hopefully Anthony Fasano (23 rec, 200 yds., 3 TD’s) will give them that. Second year offensive tackle Eric Fisher will lead the Chiefs’ offensive line.

Weakness:  Wide receiver could be a problem. Kansas City’s No.1 receiver Dwayne Bowe (57 rec, 673 yards, 5 TD’s) is not only coming off a subpar season, but also will miss the season opener after violating the NFL policy and program on substance of abuse. The one-game suspension is in response to a November arrest for marijuana possession, which was bargained down to a lesser charge of defective equipment and littering. The Chiefs have a host of receivers who could line up opposite of Bowe.  Two possibilities are Junior Hemingway and former University of Houston standout Donnie Avery (40 rec, 596 yds., 2 TD’s).  Also, rookie Albert Wilson, a playmaker out of Georgia State, has been impressive in training camp.

Outlook: Kansas City will be solid on offense with Jamaal Charles probably handling more of the load than perhaps he should have to carry. Alex Smith is in a lame duck situation playing in the final year of his contract, but if he continues to be solid and makes plays to win games, KC needs to start thinking about him being the long-term answer. But the Chiefs need more consistent play from Dwayne Bowe and their wide receivers, as well as from their secondary. Safety Eric Berry is the team’s leading tackler and is out with an injury and Kansas City traded for a safety indicating Berry could be out for a while. After starting 9-0 last season, the Chiefs stumbled to a 2-5 finish including blowing a 28-point lead in a playoff loss to Indianapolis. Kansas City needs to tighten up, especially on the defensive end to be considered among the AFC’s elite.

Strengths:  Quarterback Phillip Rivers continues to produce consistent seasons (338 comp/527 att., 4,478 yards, 32 TD’s 11 INT’s) and now Rivers has a host of receivers led by the rookie of the year Keenan Allen (71 rec., 1,046 yards, 8 TD’s), Malcolm Floyd (6 rec., 149 yards), and Eddie Royal (47 rec., 631 yards, 8 TD’s) who has developed into a classic slot receiver for the Chargers. San Diego was fourth in the league in passing offense per game last season but finally saw the glimpse of the running game they were looking for after Ryan Matthews posted his best season. San Diego also has the steady tight end play of Antonio Gates, who was slowed a little bit last season with injuries.

Weakness:  The Chargers secondary is among the worst in the league. Although they ranked 11th in the league in points allowed (21.8 ppg.) and 12th in rushing defense (107.8 yds./per game), San Diego is near the bottom of the league in pass defense (258.7 yds./per game, 29th) and in total defense (366.5 yds./per game) and they were a -4 in the turnover ratio in still making the playoffs. Eric Weddle is the Chargers best player on defense despite playing in the secondary, but San Diego needs Dwight Freeney to discover the sack touch he had Indianapolis. More rush upfront is needed for the Chargers as they lost Kwame Geathers with a leg injury in their third preseason game vs. San Francisco. The Chargers have just 35 sacks and 11 interceptions total last season.

Outlook: I love the Chargers on offense, as they were among the best in the league in passing offense (270.5 yards/per game, 4th) rushing offense (122.8 yards/per game) and in total offense (393.3 yards/per game, 5th). Tight end LaDarius Green can really complement Antonio Gates as Green really came on late last season. The Chargers need Malcolm Floyd to return to the production he had in 2012. Here’s the clincher, if the Chargers defense can challenge the Broncos and Chiefs in their division, San Diego has shown they can play with the elite teams in the AFC defeating the Bengals in the playoffs last season. They have begun working on their defense by drafting Jason Verrett in the first round of the 2014 draft and he will play the nickel corner in the Chargers defense. Can the Chargers take the next step…slowly but surely…?

Strengths:  Oakland has some stability with the running game. Joining Darren McFadden (114 car., 379 yards, 5 TD’s) is veteran Maurice Jones-Drew (234 car., 803 yards, 5 TD’s w/Jacksonville). McFadden has been injury-prone throughout his career with Oakland as he’s never played more than 13 games in a season and has missed 29 games in the last six seasons, so expect Jones-Drew to receive the majority of the carries. Matt Schaub (219 comp/358 att, 2,310 yards, 10 TD’s 14 INT’s) was brought in from Houston and should be OK until Derek Carr emerges as the quarterback of the future. James Jones (59 rec., 817 yards, 3 TD’s) was also brought in from Green Bay to be the Raiders No. 1 receiver. Oakland has some solid players on defense with the additions of Carlos Rogers and Tarell Brown in the secondary and Justin Tuck and Antonio Smith on the defensive line. The Raiders also drafted outside linebacker Khalil Mack and defensive tackle Justin Ellis.

Weakness:  Defense has been the Achilles heel for Oakland who was ranked near the bottom of the league in passing defense (255.8 yards/per game, 28th), points allowed (28.3, 29th) and they were a -9 in the turnover ratio. Defensive end Justin Tuck is the best pass rusher the Raiders have, however he’s going to need help with the addition of Antonio Smith at the other defensive end and linebacker Lamarr Woodley. The Raiders secondary led by cornerback Charles Woodson is getting long in the tooth as Woodson will be 37 this upcoming season. Oakland is looking for a No.2 receiver and that could come from Rod Streater (60 rec., 888 yards, 4 TD’s). Streater came on late last season getting a lot of his yardage as slot receiver.

Outlook: The Raiders have done some nice things in establishing stability and looking to the future, and their future could be elsewhere besides Oakland. Oakland is the only NFL team to share a stadium with a professional team (Oakland Athletics, MLB). Raiders owner Mark Davis recently toured San Antonio and the Alamodome for a few days, taking helicopter tours of the city. On offense they have a quarterback in Matt Schaub who has had some success in leading Houston to back-to-back playoff appearances in 2011 and 2012. The running game could be really good for Oakland with Jones-Drew and McFadden. Look for McFadden to stay healthy this season with the durability of Jones-Drew. The Raiders have the toughest schedule in the league with East Coast trips to New York and New England in the first three weeks of the season. Oakland is making small but steady steps in returning back to relevance. The question is whether that will be Oakland or somewhere else?