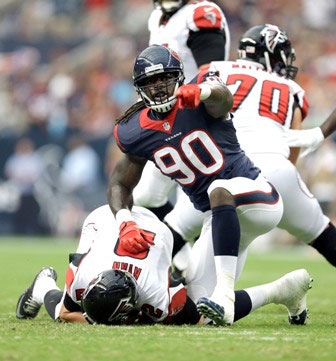 Strengths:  Quarterback Andrew Luck continues to get better for the Colts (3,822 yards, 23 TD’s, 9 INT’s). Luck has solid WR’s in T.Y. Hilton (82 rec, 1,083 yards, 5 TD’s and Hakim Nicks (56 rec, 896 yards). Nicks should have a little chip on his shoulder after being ousted in New York because he could not stay healthy and only signing a one-year deal. Don’t forget Indianapolis also has veteran Reggie Wayne (38 rec, 503 yards) who will enter his 14th season with the Colts after missing the remaining nine games last season after suffering a torn ACL. If Wayne can give the Colts solid numbers, Indy has three legit threats at wide receiver.

Weakness:  Running game: Who will step up at running back?  Trent Richardson is the presumed starter; however he only averages 2.9 yards per carry as he split time with the Colts and Browns last season. Richardson had 563 yards on 188 carries after Cleveland sent him to Indianapolis for a first round draft choice last season. There is not much behind Richardson after Vick Ballard, who was projected to be the starter this season, was diagnosed with a torn Achilles and will be lost for the season. Indianapolis also has Ahmad Bradshaw (41 att, 186 yards) on the roster to contribute as well.

Outlook: The Colts look solid to capture the division again, but can Indianapolis stay on the elite level in the AFC? Andrew Luck continues to progress at quarterback where he is the franchise quarterback for many years.  But Luck is going to need help from the running game and TE’s Dwayne Allen and Coby Fleener. The offensive line has had their issues during training camp and defensively, DE Robert Mathis will miss the first four games of the season due to a violation of the NFL substance abuse policy. Indianapolis has more talent than anyone else in their division and that will be enough for them to capture the South once again.

Strengths:  Defense remains the strength on this team led by DE J.J. Watt (80 total tackles, 10½ sacks), and with the addition of No. 1 overall pick Jadeveon Clowney out of South Carolina, Watt should return close to the 20½ sacks he had in 2012. Also the return of Brian Cushing at linebacker should be a big plus with Houston going to Romeo Crennel’s version of the 3-4 defense alignment. On offense, the health of running back Arian Foster is a huge key for the success of the Houston offense. After rushing for 1,424 yards and 15 TD’s in 2012, Foster slumped to 542 yards last season after suffering a back injury, which derailed much of last season. Andre Johnson remains a threat at WR (109 rec, 1,407 yards, 5 TD’s) and the emergence of DeAndre Hopkins (52 rec, 802 yards, 2 TD’s), as a solid No.2 receiver will be a plus.

Weakness: The play at quarterback was clearly the downfall of the team last season. While QB Matt Schaub has been sent to Oakland (219-358 comp/att, 2,310 yards, 10 TD’s, 14 INT’s), Houston hasn’t really solved the problem at the position. Yes, they did draft a QB in Tom Savage, fifth-round pick out of Pittsburgh, and he could be their future at the position…But in the immediate future, the Texans have placed their hands in QB Ryan Fitzpatrick (217-350 comp/att, 2,454 yards, 14 TD’s, 12 INT’s last season with Tennessee)…Fitzpatrick has shown he can succeed when given the opportunity as he played well in the final nine games with the Titans after replacing QB Jake Locker who suffered a shoulder injury.

Outlook: Certainly Houston can’t go anywhere but up, especially after they started 2-0 before losing 14 straight to conclude last season.  With the return of a healthy Arian Foster at running back, a solid offensive line led by guard Duane Brown and center Chris Myers and another great year from wide receiver Andre Johnson, Houston should improve. The question will come again at quarterback with Ryan Fitzpatrick as the starter. Fitzpatrick is familiar with Bill O’Brien’s offense and should benefit with a running game to support. The defense will only get better with Clowney lined up next to J.J. Watt. If they can get steady play from Fitzpatrick, Houston could find themselves in a lot of close games this season.

Strengths: Tennessee has a solid quarterback in Jake Locker. The question with Jake is his health. Locker missed the final nine games of last season due to a shoulder injury. Despite losing RB Chris Johnson in free agency to the New York Jets, Tennessee feels that Shonn Greene could be the feature downhill running back that they were looking for.  They also have Dexter McCluster, formerly with Kansas City and rookie Bishop Sankey. Wide receiver Nate Washington (58 rec, 919 yards) had his most productive season with the Titans last season. With a healthy Locker, look for Washington to improve on his numbers.

Weakness:  Identity on defense.  The safeties led by Bernard Pollard (99 tackles, 3 INT’s) and Michael Griffin (82 tackles, 1 INT) are the physical players Tennessee needs but they are in the secondary. Tennessee was in the middle of the pack in the league in defense (16th against the run, 12th against the pass), however they need a playmaker to fit the 3-4 defense alignment they will play. LB’s Wesley Woodyard and Kamieron Wimberley should supply Tennessee the physical play in the middle.

Outlook: Tennessee got off to a good start last season winning three of their first four games, but after Locker got hurt, the Titans dropped five of their next six games and finished 7-9 and it cost Mike Munchak his job. Ken Wisenhunt is a proven winner taking the Arizona Cardinals to a Super Bowl in 2009 before losing to Pittsburgh. Wisenhunt was known for being an offensive coordinator with the Pittsburgh Steelers and the Arizona Cardinals and he will develop Locker into a better quarterback. The question is will Wisenhunt be given time to develop the identity of what Tennessee will be like; we shall see.

Strengths: Drafting QB Blake Bortles, No. 3 overall from Central Florida, gives Jacksonville a solid starting point on offense. Bortles has some solid receivers in Cecil Shorts (66 rec, 777 yards, 3 TD’s), Marquise Lee, drafted in the 2nd round from USC and Marcedes Lewis (25 rec, 359 yards, 4 TD’s) is a solid starting TE. The decision of whether to play Bortles early should come after the first four games; three of them are on the road against Philadelphia, Washington, and San Diego. Running back duties will be given full-time to Toby Gerhart (36 car, 283 yards, 2 TD’s), who backed up Adrian Peterson in Minnesota last season. Jacksonville is solid at linebacker led by Paul Posluszny, who led the team in tackles with 161.

Weakness: The secondary is the weak link on the Jaguars due to lack of experience. Lots of 1st and 2nd year guys on the roster. Alan Ball has the most experience in the secondary playing 15 games last season finishing with 47 tackles and two interceptions. Ball will be one of many Jaguars to be counted on to improve a defense that ranked 23rd overall (24th against the run, 24th against the pass) in the league last season. Jacksonville plays a 4-3 defense alignment and will rely on Chris Clemons to give them the push they need upfront. Clemons finished tied for the lead in sacks with 4½.

Outlook: Jacksonville needs some excitement to keep the fans in Jacksonville fired up about the team. QB Blake Bortles can give them that; it’s just a matter of how soon. The Jaguars do have some playmakers, however one of them WR Justin Blackmon remains indefinitely suspended. Can Toby Gerhart be the workhorse at running back that Maurice Jones-Drew was, maybe not. But if he can give them a running game to take some pressure of Chad Henne for now and then Blake Bortles, Jacksonville’s front seven is no slouch and they can be completive in this division. But it will take a little time and more playmakers.