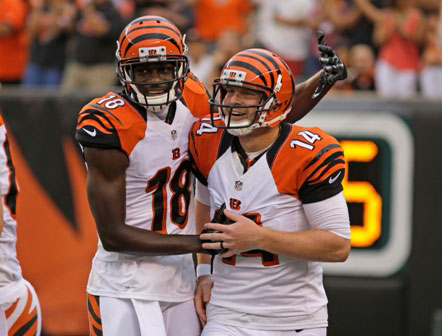 A.J. Green (18) and Andy Dalton (14) have quickly become one of the best WR/QB tandems in the NFL (Photo Credit: AP Photo/Tony Tribble).

Strengths:  The growing maturation between quarterback Andy Dalton and wide receiver A.J. Green. Dalton has been solid since becoming the starting quarterback three seasons ago and with Green, the two are becoming one of the better quarterback-receiver tandems in the league. Green (98 rec., 1,426 yards, 11 TD’s) has moved into the elite status among the receivers posting double-digit touchdowns for the second straight year. New offensive coordinator Hue Jackson may have a No. 1 running back in Giovanni Bernard, along with recent draft choice Jeremy Hill out of LSU, in hopes of improving Cincinnati’s rushing attack. Jackson, when he was with the Raiders, improved the Raiders running game from 21st to 2nd in the league. He hopes to improve the Bengals’ rushing attack, which was ranked 18th in the league last season averaging 109.7 yards per game.

Weakness: The Bengals have some new faces on their 4-3 defensive alignment, which on paper can be potentially really good. Cincinnati loses its defensive coordinator Mike Zimmer, who is now the Minnesota Vikings head coach. On the defensive line, Geno Atkins and Carlos Dunlap lead Cincinnati’s pass rush upfront. Linebacker Vontaze Burfict leads the Bengals defense along with fellow linebackers Vincent Rey and Marquis Flowers. The secondary is experienced, however, cornerback Leon Hall is coming off his second torn Achilles tendon in the last three years. Terrance Newman had resurgence last season finishing with 2 INT’s and 52 tackles. Cincinnati finished in the top five in three defensive categories: total defense (305.5 yards per game, 3rd), Rushing defense (96.5 yards per game, 5th) and Pass defense (209.0 yards per game, 5th).

Outlook: Over his tenure in Cincinnati, head coach Marvin Lewis, known for his defense, has Cincinnati as one of the best teams in the AFC North. The only thing left on Lewis’ resume is winning a playoff game. Cincinnati is 0-5 in the playoffs under Lewis. Despite changes on defense, the Bengals’ new defensive coordinator Paul Guenther should keep Cincinnati solid. Cincinnati offensively continues to excel ranking in the top 10 in points (26.9 per game), total offense (368.2 yards per game) and passing yards (258.5 yards per game, 8th). Andy Dalton continues to excel year in and year out and he finished 2013 with 4,293 yards and 33 touchdowns. If he can cut down his interceptions and improve his post-season play Cincinnati can go deeper into the playoff for the first time since they went to the Super Bowl back in 1988.

Strengths:  Wide receiver Antonio Brown is emergining as the Steelers No. 1 receiver. Last season, Brown became the first NFL player with at least five catches and 50 yards in every game last season finishing second in the league with 1,499 receiving yards. Look for either Lance Moore or Markus Wheaton to lineup opposite of Brown. In the backfield, a healthy Le’veon Bell is a double threat who finds a nice complement in LaGarrette Blount who should help improve a running game that was riddled with injuries last season and averaged only 86.4 yards per game (27th in NFL). Place kicker Shaun Suisham hit double-digits six times and only missed two field goals all last season scoring 129 points. And that was without any kicks beyond 50 yards, making only four from that distance in nine seasons none longer than 52 yards.

Weakness: The offensive and defensive lines are starting to show their age. On the offensive line, numerous injuries are taking a toll on the running game as well as on quarterback Ben Roethlisberger. The Steelers offense is running under Todd Haley, former Arizona Cardinals head coach, and he and Roethlisberger were still working to get on the same page. Pittsburgh’s offense was ranked in the middle of the pack in the league in passing offense (251.2 yards per game) and points (23.7 points per game, 16th). On defense, safety Troy Polamalu is starting his 12th season in Pittsburgh. With linebackers Lawrence Timmons and Jason Worilds returning, their defense has a chance of being stifling if linebacker Jarvis Jones, safety Shamarko Thomas and defensive lineman Steve McClendon can be more effective.

Outlook: Pittsburgh looks to avoid missing the playoffs for three straight years. Defensively is where it needs to start. Some of their constants like Polamalu and Timmons are starting to get a little older and may not be the same player they were earlier in their career, but they are playmakers and when the Steelers were at their best they had premier playmakers. Pittsburgh must keep Roethlisberger upright as he finished 2013 with another 4,000-yard season and looking more comfortable in Todd Haley’s offense. He did so without a deep threat and with a less than 100 percent tight end in Heath Miller. If he can stay healthy, Roethlisberger on offense still gives Pittsburgh their best chance to win.

Strengths:  Tight End Dennis Pitta showed glimpses of what he could become. After missing most of the 2013 season due to a hip injury he suffered in training camp, Pitta did play the final four games of last season finishing with 20 catches, 169 yards. Pitta has a new offensive coordinator in former Texans coach Gary Kubiak who utilizes tight ends. Quarterback Joe Flacco will have veteran Steve Smith lining up opposite of Torrey Smith and former Texan Owen Daniels will give Kubiak the two tight end sets he loves to run. Defensively, the Ravens are solid with Elvis Dumervil and Terrell Suggs leading the way on the defensive line with linebackers Darryl Smith and Courtney Upshaw expected to clog the middle in the Ravens’ 4-3 scheme. Place kicker Justin Tucker had a huge year scoring 140 points, tied for sixth in the league last season.

Weakness:  Baltimore’s running game will take a hit for the first two weeks of the season with the suspension of running back Ray Rice. Rice, who was suspended because of a violation of the NFL’s personal conduct policy, managed a decent season last year despite nursing a hip flexor injury. Look for Bernard Pierce to pick up the slack for Rice, at least in the beginning. Quarterback Joe Flacco needs a bounce-back season after winning the Super Bowl the previous year. The Ravens offense ranked near the bottom of the league in total offense (307.4 yards per game, 29th.) While the defense was ranked in the upper echelon of the league, they were -5 in the turnover ratio and only scored 20 points per game, which was ranked 25th in the league.

Outlook: Losing Rice for the first games will hurt the Ravens, especially when the games are division opponents Cincinnati and Pittsburgh in the first two weeks. Quarterback Joe Flacco received the huge contract after leading Baltimore to a Super Bowl win two seasons ago. However, last season Flacco didn’t show he was worthy of the contract as he finished with career highs in attempts, completions and passing yards. But, he also tossed a career worst 22 interceptions and failed to throw 20 touchdowns in a season for the first time since 2008. New offensive coordinator Gary Kubiak should get Baltimore’s offense back on track especially with the additions of Steve Smith and Owen Daniels. Baltimore’s defense may not be as dominant like they were during the Ray Lewis era, but should be competitive as it always is in the rugged AFC North.

Predicted finish: 8-8, 3rd in AFC North, will miss the playoffs.

Strengths:  Cleveland’s running game got a dramatic boost with the acquisition of Ben Tate from Houston. Tate was sharing time with Arian Foster last season but will be the No. 1 back with the Browns and will try to help bolster a Browns rushing attack ranked 27th in the league last season averaging 86.4 yards per game. Cleveland has a decent passing game and an emerging tight end in Jordan Cameron. Cameron has the skill set to be a top tight end as evident by his stats last season (80 rec., 917 yards, 7 TD’s) despite the loss of offensive coordinator Norv Turner. And with the season long suspension of wide receiver Josh Gordon, look for Cameron to continue to be a favorite target of quarterback Brian Hoyer.

Weakness:  We are going to see very soon who will be the quarterback of the future. Brian Hoyer is the present, but Johnny Manziel is the future, it’s just a matter of when. Cleveland’s offense was starting to come together before Hoyer went down with a knee injury that finished his season. Cleveland’s defense was stout ranking 9th in the league in total defense giving up only 332.4 yards per game. Linebacker Karlos Dansby will lead the Browns’ defense at linebacker. Along the defensive line Cleveland has Phil Taylor, Desmond Bryant, Ahtyba Rubin, and Jabaal Sheard. .

Outlook: Let’s see how long the hype lasts in Cleveland football before basketball season begins. Johnny Manziel should be a starter after their bye week on the road against Tennessee. If the Browns’ offense, especially the running game, gets off to a fast start, there won’t be much pressure on Hoyer to have to deliver. On defense, the Browns are stout and if they can win the turnover battle, Cleveland will be in a lot of low-scoring games this season. How effective the quarterback will be, whether it is Hoyer or Manziel remains the question. Just having Manziel hanging out with LeBron now is creating buzz now in Cleveland.

Predicted finish: 7-9, 4th in AFC North, will miss the playoffs.