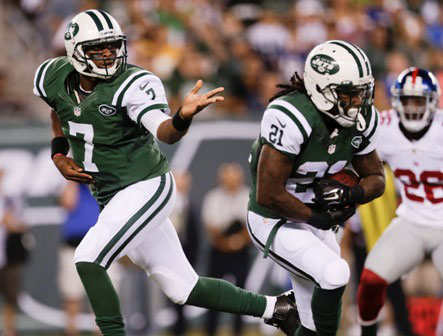 If Chris Johnson (21) delivers for the Jets, it will take the load off of quarterback Geno Smith (7) (Photo Credit: AP Photo/Julia Cortez).

Strengths:  The New England secondary becomes the strongest part of the team with the addition of cornerbacks Darrelle Revis and Brandon Browner. Browner will serve a four-game suspension due to a violation of the NFL’s substance abuse policy. Browner failed a drug test after testing positive for marijuana. The linebacker corp. will be led by leading tackler Jerrod Mayo along with Jamie Collins and Dont’a Hightower playing alongside in the Patriots 4-3 defensive alignment. Quarterback Tom Brady goes into his 14th season as the starting quarterback and he leads a Patriots offense that scored 27 points or more in 10 of 16 games last season (27.8 ppg.) Wide receiver Julian Edelman is the primary threat as the No. 1 receiver coming off a season in which he amassed more than 1,000 yards last season after having 714 yards in his first four season combined. Place kicker Stephen Gostowski was a scoring machine with 158 points. It’s his third straight season with more than 140 points.

Weakness:  Running game: Shane Vereen appears to have emerged as the top back on the Patriots roster. However, Stevan Ridley, a former 2nd round pick in 2012, had 1,263 in 2012, but really slumped off finishing with 773 yards and finished with four fumbles, which caused him to share time with LeGarrette Blount. Last week, New England traded away long time offensive lineman Logan Mankins to the Buccaneers for tight end Tim Wright and a fourth-round pick. Reportedly, the trade did not sit well with quarterback Tom Brady. What also might not sit well with Brady is the recent trade of backup quarterback Ryan Mallet to Houston in exchange for a future draft pick.

Outlook: As long as Bill Belichick is coaching the New England Patriots and they remain in the AFC East, you can count on the Patriots winning the division and getting a first round bye in the playoffs. Despite the continual losses on offense and the loss of significant players due to injuries such was the case last season when New England lost defensive tackle Vince Wolfork for most of the season due to an Achilles injury. But if New England is to return to the Super Bowl, somewhere they haven’t been since 2007, they need a playmaker on defense. If cornerback Darrelle Revis comes back with any kind of effectiveness that he had before the injuries, the Patriots could be back in the AFC championship game, this time with a different result.

Strengths:  Could have a potential home-run hitter in the backfield in running back Chris Johnson. The former Tennessee Titans running back has amassed 1,000 yards or more in each of his first six seasons. Look for Chris Ivory and Bilal Powell to battle for the No.2 running back behind Johnson. Place kicker Nick Folk is coming off one of his best seasons finishing 13th in the NFL in scoring. If the offense continues to develop under Geno Smith, Folk will have more opportunities to score. The defensive line remains the anchor in Rex Ryan’s 3-4 defense. Defensive ends Muhammad Wilkerson and Sheldon Richardson combine with Damon Harrison at nose tackle leading a defense that finished 3rd in the league in rushing defense and 11th in total defense overall. The linebackers led by DeMario Davis and David Harris plugs up the inside against the run.

Weakness: New York has a No. 1 receiver in Eric Decker, coming over from the Broncos. But there’s not much after that. Stephen Hill, a former 2nd round pick in 2012, was released and the Jets will have to choose between five receivers; David Nelson, and Jeremy Kerley along with rookies Jalen Saunders, Shaquelle Evans and Quincy Enunwa being added via the draft. Jace Amaro or Jeff Cumberland will step up and will be the guy at tight end. Cumberland played in 15 games last season.  A lot is expected out of first round selection Dee Millner, a cover cornerback that was part of a Jets defense that was 22nd in the league against the pass giving up 246.7 yard/per game. Offense as a whole needs to get better despite quarterback Geno Smith posting solid numbers in his rookie season. The Jets offense was ranked 25th in the league last season giving up 318.1 yards per game.

Outlook:  Certainly, defense will be the Jets’ calling card, despite the improvements on offense this off-season with additions of Michael Vick and running back Chris Johnson. But the true measure of how much the Jets will close the gap between them and New England will come in the quarterback play. Geno Smith passed for over 3,000 yards in his rookie season; however, he did finish with 21 interceptions. If he can cut down on the mistakes and get the help in the running game, New York can keep themselves in a lot of games with their defense. Don’t count on Eric Decker posting the numbers he did with Denver, however, he gives the Jets a No.1 option. Defensively, Rex Ryan believes in his Jets, but can he believe in the offense?

Strengths: Miami has a No.1 running back in Knowshon Moreno, who is coming off a 1,000-yard season and double-digit touchdowns (10). After flip-flopping between Lamar Miller and Daniel Thomas, Moreno could carry a majority of the load and is also a good receiver coming out of the backfield with 60 receptions last season. Quarterback Ryan Tannehill played well in stretches last season for the Dolphins but a consistent running game will take some of the pressure off Tannehill.  Wide receivers Mike Wallace and Brandon Gibson and Brian Hartline along with the draft selection of Jarvis Landry out of LSU should also help. The Dolphins had a pleasant surprise at tight end in Charles Clay and he could become a favorite target of Tannehill.

Weakness: Miami’s defensive line needs to step up big time, especially No. 3 overall pick Dion Jordan, who only played in 29 percent of the defensive plays last season. Oliver Vernon benefited from the playing time leading the team in sacks with 11. Defensive tackle Randy Starks is the Dolphins’ most consistent player and defensive end Cameron Wake is the team’s best pass rusher and is the one opposing team’s game plan for. Cornerback Brett Grimes will get some help in the secondary with the addition of Cortland Finnegan.  Place kicker Caleb Stirgus missed eight field goals but still finished with 111 points. Wide receiver Brandon Gibson is recovering from a torn patellar tendon and now will have to adjust to a new offensive system and competition from Rishard Matthews and Jarvis Landry.

Outlook: Miami needs their running game to step up to take some pressure off Ryan Tannehill and hopefully Knowshon Moreno will be able to help in that regard. The Dolphins were ranked in the bottom of the league in rushing (90 yards/per game), passing (222.9 yards/per game) and total offense (312.9 yards per/game, 27th). Tannehill actually had a pretty good year by quarterback standards (588 att.,355 comp., 3,705 yards, 24 TD’s, 17 INT’s), but after the fiasco that took place last season between offensive line Jonathan Martin and Richie Incognito, Miami could now focus on this season and moving forward. The connection between Tannehill and Mike Wallace needs to get in sync, and if they can link up more often this season, maybe the Dolphins will make a move up in the AFC East.

Strengths: Buffalo does have some solid players at the key offensive skilled positions starting with quarterback E.J. Manuel, running backs C.J. Spiller and Fred Jackson and in the draft Buffalo selected Clemson wide receiver Sammy Watkins to replace Steve Johnson who was traded to San Francisco in the off-season. With the running backs, look for C.J. Spiller to get the start early start and Jackson to come on late. Despite having bruised ribs, Watkins is expected to replace Johnson as the No. 1 option, but the Bills also have Robert Woods and Marquise Goodwin who will step up for Buffalo. The defense can be potentially really good as the unit had 57 sacks and 23 interceptions and are led by linebacker Kiko Alonso. Defensive End Mario Williams really gelled with defensive end Jerry Hughes and defensive tackles Kyle Williams and Marcell Dareus. Leodis McKelvin is the Bills’ best defender in the secondary and gives Buffalo a spark in the return game.

Weakness: Scott Chandler has been inconsistent at tight end, however, he will be given every opportunity to be the presence Manuel will need. Injuries to Manuel have been a weakness as well as he missed significant time last season due to knee injuries. Scoring was an Achilles heel for Buffalo last season averaging 21.2 points per game, which ranked 22nd in the league. Wide receiver Mike Williams’ numbers declined sharply after missing 10 games in 2013 with Tampa Bay. In addition, Williams has had some off-field issues, which led to him being jettisoned to Buffalo where he will have to contend with more competition for catches. Buffalo must improve on defense, especially against the run where the Bills gave up 128.9 yards rushing per game (28th in NFL).

Outlook:  Buffalo is in a very tough division where New England reigns supreme, but, the Bills have talent on the offensive side and with a solid defense that can create turnovers, there could be a lot of low-scoring competitive games this season. Place kicker Dan Carpenter only missed three field goals last season and was 14 for 17 on field goals that were 40 yards or more. McKelvin is a key to Buffalo’s defense as well as their special teams unit. After a disatersous 2012, McKelvin had a solid 2013 finishing with 72 tackles and a forced fumble. Manuel needs to stay healthy to give Buffalo a fighting chance in the AFC East still controlled by the Patriots.