What School Has Best Chance to Challenge SEC Football Dominance? 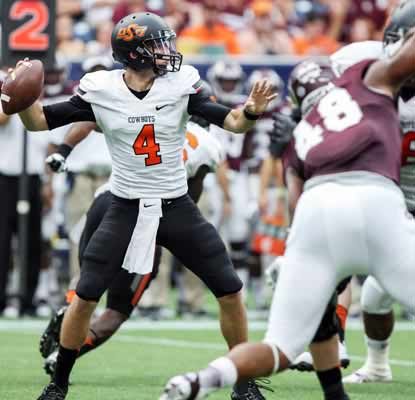 New Oklahoma State quarterback J.W. Walsh (4) has proven he can shred a SEC defense like Mississippi State, but the Cowboys have no shot against the top teams of the SEC (Photo Credit: CBSSports.com).

You Have to Take the Crown

Regal Media Group likes to urge all of its fans to “step up to the throne and reclaim your royalty.”  However for seven years, SEC football has held the college throne and very few have come close to taking their crown.

Just like UCLA’s college basketball dynasty in the 1960s and 1970s, there will eventually be a school like North Carolina State in 1974 that has a superstar so talented (like Basketball Hall of Famer David Thompson) that he can virtually take down a seemingly indestructible empire singlehandedly.

However, what school and what conference has the ability and swagger to slay Goliath?  Regal Magazine breaks down the true challengers of SEC football dominance and the mere chumps.

Big 12: Oklahoma State seems to be the big dog in the Big 12 after the first game of the season, not simply because of their preseason rank, but because they may have found a diamond in the rough in sophomore quarterback J.W. Walsh.

As starting quarterback Clint Chelf struggled with simple screen passes and continuously throwing into double coverage, Cowboys coach Mike Gundy deserves credit for recognizing that his offense was stagnant and not playing like a top 15 team early on against Mississippi State on August 31.

Playing against a SEC defense, Walsh showed that he has the running ability to frustrate defenses, and his passing improved throughout the game.

Although he has stardom written all over his face, do not expect a previously unknown rookie to be able to compete against the top SEC football teams in the country like Alabama, LSU and South Carolina.

But if there is a Big 12 team that can compete with the mighty SEC, it is Oklahoma State even though the conference has lost much of its luster over the past two seasons.

ACC: Clemson has all of the goods to compete with the best of the best even after losing first round wide receiver DeAndre Hopkins to the NFL’s Houston Texans.  And with Tajh Boyd under center, they have proven they can beat any SEC football team on any given Saturday, just ask LSU and Georgia.

However, Clemson is probably still Clemson, meaning they show up for the big boys, but leave their big boy pants at home when playing mediocre schools like Wake Forest and Duke.  True champions play like champions every game, because in college football all it takes is one loss to end dreams of sitting atop the throne of the NCAA.

The sleeper pick from the ACC has to be Florida State and their freshman quarterback “Famous” Jameis Winston.  After his near perfect debut against Pittsburgh, schools like Texas have to be kicking themselves again for letting a Longhorn wannabe (like Heisman Trophy winners Robert Griffin III and Johnny Manziel) escape to another school yet again.

However, just like Oklahoma State, putting stock in a newcomer (unless it is Cam Newton) to lead a team on his back is risky, so Clemson still has the best chance to challenge SEC football dominance because of the experience of Boyd.

The American: The former Big East is still basically the Big East and that does not bode well for Louisville and all-everything quarterback Teddy Bridgewater.  Bridgewater is the best QB prospect by far in college football, but playing against schools like Houston, SMU and Central Florida is not the same as playing against SEC football powerhouses every week.  They will simply not have enough quality wins to get a shot at the BCS Championship Game.

However, like Clemson they have proven that they can beat an SEC power like Florida, but they will not get a chance to do it on the big stage until they are affiliated with the ACC next year.

Big 10: Ohio State is the biggest threat to SEC football in 2013.  With a Heisman Trophy candidate (Braxton Miller) at quarterback and a schedule that features big games with big stakes, the Buckeyes have the opportunity to bring a championship trophy to Columbus, Ohio for the first time since the days of Jim Tressel and Maurice Clarett.

Furthermore, they have an SEC football legend as a coach in Urban Meyer.  Coach Meyer was able to lead Florida to two national championships after finding success with Alex Smith and Utah, and he will eventually make it work for the Buckeyes.

Despite being in a strong conference, there only possible misstep is at the “Big House” in Michigan against an improving Wolverine squad on Nov. 30.  If they win that game, expect to see them in Pasadena, Calif.

Pac-12: It still feels funny to say Pac-12 after all of those seasons as the Pac-10 and Pac-8, but the conference to the west is possibly the second toughest conference this year with Oregon, Stanford and UCLA.

Despite Oregon being ranked as the second best team in the country, their first year without trendsetting coach Chip Kelly makes them a question mark for the BCS Championship Game in January.

Furthermore, Stanford seems to upset a top team every year while failing to go undefeated, so that virtually eliminates any West Coast team from actual contention.

Nevertheless, if one is a gambling person, smart money would ride with Ohio State to upset a SEC football powerhouse in the national championship this year.