What are the Best College Football Teams to Not Win Title? 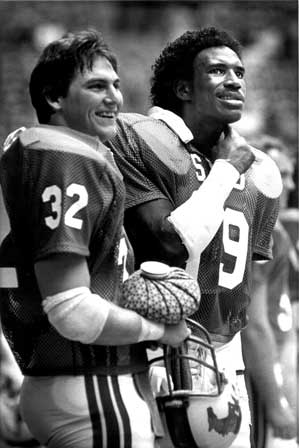 The Pony Express SMU team, featuring Craig James (left) and Eric Dickerson, is one of the best college football teams to not win the championship (AP Photo).

Championships are at least in part a function of luck and random events. It is rare that a team in any sport is so good that it will win under any circumstances.

This is particularly true in college football, where one loss at any point in the regular season can derail a team’s title hopes, and until the BCS came along the champion was at times left entirely to the whim of poll voters. In that spirit, Regal Magazine has compiled its list of three of the best college football teams never to win a national title.

1951 USF Dons: Perhaps long forgotten, this team was not only undefeated and untied, it was uninvited to a bowl game. The reason will resonate with the Regal community. Two of USF’s biggest stars were African Americans Ollie Matson and Burl Toler, and the Cotton Bowl based in Dallas, the Sugar Bowl based in New Orleans and the Orange and Gator Bowls based in Florida were not interested in a game that featured Black stars.

The Rose Bowl in Pasadena had agreements in place with the Big 10 and Pacific Coast Conference to take their champions, leaving the Dons with nowhere to play unless they chose to leave Matson and Toler at home. The school refused to play without its stars, and so its 9-0 record went untested in the bowl season.

Matson told The New York Times in 2001 that when Joe Kuharich, the San Francisco coach, told the players that they might be invited to the Orange Bowl if Matson and Toler did not play, the team’s defensive star Gino Marchetti said, “No, we ain’t going to go without Burl and Ollie.”

Marchetti confirmed the story, but added that he was not the only player to take that stand. “We answered, ‘No, we’d never do that,’ ” he told The Times in 2009. “And after we said no and removed ourselves from consideration, nobody ever had a second thought about it.”

The team lost $70,000 over that season. With no bowl money to offset the deficit, the university discontinued its football program. Tennessee, with a 9-1 record, was voted national champion by UPI and AP.

1982 SMU Mustangs: Known as the Pony Express, the SMU Mustangs of the mid 1980s were some of the most exciting football squads every produced by the old Southwest Conference.

During that time SMU enjoyed its most successful era since the late 1940s and early 1950s. They posted a record of 55-14-1 and won three SWC titles while regularly selling out Texas Stadium. They nearly won the national title in 1982 with a team that featured running backs Eric Dickerson and Craig James. However, the team lost its shot at a title when it settled for a tie against Arkansas in the last game of the season, to guarantee a spot in the Cotton Bowl, rather than risk a two-point conversion that could have won the game and crowned the Mustangs as one of the best college football teams of all time.

Because SMU was the second smallest school in the SWC (only Rice is smaller), some smelled a rat. Also, the Mustangs had posted just nine winning seasons between 1949 and 1980, before suddenly becoming world beaters. Investigations followed, it was discovered that payments had been made to key players, and the program was shut down for 1987 and1988 as part of the NCAA “death penalty.”

It was a great team, but as Tod Robertson said in the Dallas Morning News, the Pony Express story is the saga of how, “boosters, coaches and senior administrators colluded to bribe top high school players into signing with SMU.”

1967 UCLA Bruins: UCLA had everything going for it in its quest to become the school’s first national champion since coach Red Sanders’s squad took home the title in 1954.

The 1967 Bruins had Heisman Trophy winner Gary Beban behind center and future NFL star Mel Farr as the featured running back. The number-one ranked UCLA team swept through its non-conference and AAWU schedule before taking on also-undefeated and fourth-ranked USC in the traditional rivalry game at the Los Angeles Coliseum on Nov. 18, 1967.

In those days both the Trojans and Bruins called the Coliseum home. The game captivated the city and much of the country. More than 93,000 people filled the Coliseum for a game mostly controlled by UCLA. However, Bruins kicker Zenon Andrusyshyn missed a close field goal and had a PAT blocked, and the Trojans had scored on an interception and a trick play, so the game was still in reach 20-14, in the fourth quarter.

Given life, USC took advantage with a 64 yard broken field run by future Hall of Famer O.J. Simpson and made the PAT to provide the 21-20 final.

Beban was playing with fractured ribs and could not mount a comeback. This game is considered by many to be the signature game of the Trojan-Bruin football rivalry and one of the greatest games in college football history.

USC beat Indiana in the Rose Bowl on New Years Day in 1968 to clinch the 1967 National Championship. UCLA did not go to a bowl game as the Rose Bowl agreement of the day allowed only the AAWU conference champion to play in a bowl game. That rule changed in 1975.

USC coach John McKay called Simpson’s run the “most exciting college run I’ve ever seen,” and broadcaster Keith Jackson called the 1967 Bruin-Trojan showdown, “the greatest game I have ever seen.” As for the Bruins, they are still waiting for a football championship to go with the 1954 title.

There you have Regal’s nominees for some of the best college football teams never to win a national title. We’d love to hear what you think.