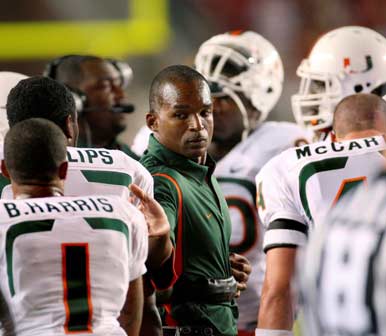 Where are all the Black College Football Coaches?

The on-field workforce is about 50 percent African American.

Of those one-step from the top rung, 20 percent are African American.

Yet at the very top; where the apparel contracts, TV shows, courtesy cars, and alumni influence mean big, life changing money, Black college football coaches make up about three percent of the total amount of head coaches in the Football Bowl Subdivision (FBS), which until 2008 was known as NCAA Division 1A.

A cynic might say that African Americans are good enough to do the work, largely good enough for first level management, and even good enough to call plays and make important in-game decisions, but not good enough to reap the largest rewards and represent universities as the public face of major college programs.

University of Buffalo Athletic Director Warde Manuel, who happens to be African American and hired a fellow African American, Turner Gill, as head coach of the Bulls, wondered about that to ESPN.com.

“If a White person is not successful in a particular position, that doesn’t mean another White person would not be successful,” said Manuel. He added: “I struggle with the why, to be honest. Why this is going on as long as it has? Why (Black) people who are coordinators in successful programs haven’t had a chance to be a head coach, while others with less accolades, less records, get these jobs?”

Former Georgetown head basketball coach John Thompson offered an explanation. “I’ve always said that good White folks are reluctant at times to break the mold because of the pressures that are put on them,” Thompson said. “They may feel a little freer to do the right thing now that we have a president of color.”

Some of the explanation may lie in the difference in graduation rates between Caucasian males and African American males. According to the institution Inside Higher Ed, only about 40 percent of enrolled African American males graduate from four year colleges within six years of matriculation, compared to about 60 percent of Caucasian males under the same criteria. It seems that Black college football coaches may be starting with a real disadvantage when it comes to advancement, not just a perceived disadvantage in the eyes of decision makers. But we cannot overlook the fact that 19 of the 68 teams who participated in bowl games for the 2008 season graduated fewer than half of their African American football student-athletes, while only one school graduated fewer than half of its White football student-athletes.

Time will eventually change the number of Black college football coaches, as it has since the day in 1966 when Bill Russell became the first head coach in any major US sport when he took over the Boston Celtics from Red Auerbach. Beyond time; pressure, agitation and personal responsibility are the ingredients necessary to secure change. Pressure on institutions to do the right thing by hiring successful African American coordinators to head coaching positions when openings occur; agitation in the media and through organized peaceful protest in cases when under-qualified Whites get some of those jobs; and the personal responsibility to perform well enough academically to be completely qualified when there are openings, and mentor the next generation to break the chain of African American underperformance in higher education.

Those ingredients are crucial in the recipe to increase the chances of Black college football coaches ascending to the top jobs.