Stay or Go; What Should South Carolina’s Jadeveon Clowney Do? 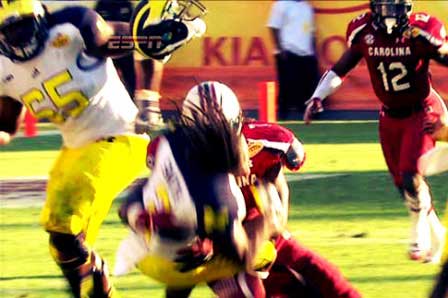 South Carolina defensive end Jadeveon Clowney became a legend for hits like this during the 2012 season (Photo courtesy of elitedaily.com).

To Play or Not to Play: That is the Question

After two years of dominating the field and putting fear in collegiate quarterbacks, South Carolina defensive end Jadeveon Clowney is faced with making a decision that has troubled many college football athletes; whether to play his junior season or sit out?

Jadeveon Clowney would have been the first pick in the 2013 NFL Draft. However, the NFL has ruled that a player must be at least three years removed from high school before he is eligible for the draft.

If he had been a baseball player or even a basketball player, his place in the professional league would have been solidified.

But because of this NFL rule, athletes like Jadeveon Clowney that have all the talent and capability to play at the professional level have to settle for sticking around another year and determine how they will handle that final season.

“He should play,” said 33-year-old Joe Shelton. “Taking a year off in football is very difficult and hard.”

“I think he should play,” said 24-year-old Travis Johnson. “If he can’t go into the draft he should try and win a national championship.”

Whatever decision that Jadeveon Clowney makes has both its pros and cons. If he plays he can win not only a national championship but can also potentially have an even greater season. By staying active and working hard he can grow stronger and learn to play even smarter, which can only benefit him in the professional league.

“I feel like after the season he had his draft stock will definitely rise,” said Johnson.

While stepping up and playing with his teammates another season seems to be the noble thing to do, Jadeveon Clowney also must do what is best for the longevity of his career.

To sit out his junior year and prepare for the 2014 NFL Draft prevents possible injuries he may face if he plays.

If he doesn’t play, he cannot get hurt. Today’s glory is never promised tomorrow. An athlete can be at the pinnacle of his career and it can all end within a matter of seconds. One wrong play or one bad move can change it all and it’s not a risk some players are willing to take so close to achieving their dream of making it pro.

“He should sit out and train because he shouldn’t want to risk any potential injuries or risk hurting his lottery pick number by having an off year,” said 18-year-old Wesley Douglas. “He should sit out and let the NFL coaches pick him based on his previous season, which was a legendary season.”

While the decision for what Jadeveon Clowney should do may be black and white to many, some fans understand the complexity of this choice.

“I think if he sits out he will lose the respect factor with coaches and players,” said 23-year-old Randall Newsome. “On the other hand, in the grand scheme of things the smarter thing would be to sit out and not go through another grueling SEC schedule and risk injury.”

But some believe it’s that type of attitude that hinders a player.

Regardless of what fans and critics may say, the ultimate decision falls on one man and one man only. Jadeveon Clowney must do what is best for his career and what will help take him to the next level as a professional athlete.

Whether that decision is to continue to play or even deciding to sit out, we can only hope that it will eventually lead to us getting the chance to see this star one day on a professional platform.