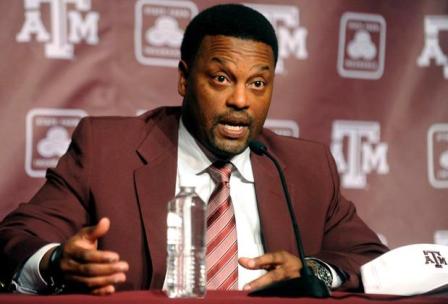 Kevin Sumlin will be the coach that leads the Aggies into the brutal SEC.

There will be a novel sight on the Texas A&M sideline next season. Not only is Kevin Sumlin the first African American head coach in Aggie history, he is just the third Black man to run an SEC football program and one of about 10 Black head coaches in the entire FBS (formerly Division 1) Division.

There is so much money at stake today at the highest levels of college football that one would think prejudice would take a back seat, and perhaps Sumlin’s signing is evidence that it has. Yet, SEC football is perhaps the most tradition-laced entity in all of college sports. We have the hedges in Georgia, the checkerboard endzone in Tennessee and the victory oaks in Auburn. Alabama has been playing in the same uniforms it wore when Joe Namath was running the Crimson Tide’s offense, and Mississippi stills plays Dixie as its fight song. Black players were not welcome until well into the 1970s.

Still, the spread offense Kevin Sumlin put together at the University of Houston was hard for A&M to ignore when it decided a 25-25 record was not enough to keep Mike Sherman.  Sumlin, 47, went 35-17 in four seasons with Houston, and the Cougars routinely ranked as one of the nation’s highest scoring teams.

“When you have a head coach, the one thing that you ask is that you leave the program in better shape than what you inherited,” Houston athletic director Mack Rhoades said. “And there’s no question that Coach Sumlin did that.”

Houston won its first 12 games this year and was in line for a Bowl Championship Series berth this season until losing at home to Southern Mississippi in the Conference USA championship game.

Despite the loss, Kevin Sumlin remained a hot name to fill just about every high-profile coaching vacancy available. Reports linked him to Mississippi, Illinois, Arizona State and UCLA, in addition to Texas A&M.

“(We) spoke to many worthy and qualified candidates, but my decision, which was made in consultation with president (R. Bowen) Loftin, kept leading me to Kevin,” athletic director Bill Byrne said. “I believe he is the right person to lead our football program into the Southeastern Conference. First of all, Kevin is a terrific person. He is also one heck of a recruiter and he will put together a great staff.”

It will be his second stint at the school after working as an assistant under R.C. Slocum in 2001-02.

“I am very excited about the opportunity to serve as the head football coach at Texas A&M University,” Kevin Sumlin said in a statement. “Having coached there before, I understand the culture and embrace the commitment by the 12th Man regarding Aggie football. Aggieland is a special place and I look forward to working with the young men in the football program and recruiting the type of players we need to be successful in the SEC.”

“The hiring of Kevin Sumlin is a great opportunity to build on the solid foundation left by Coach Sherman,” said former Texas A&M linebacker Steve Solari, who played for the Aggies in the early 1990s. “Hiring the first African American head football coach at A&M is a momentous occasion.”

It will be interesting to watch Kevin Sumlin’s progress at A&M. Will the 12th Man become impatient of the Aggies if they have trouble adjusting to the SEC in their first year after coming over from the Big 12? Will Sumlin be given the same 50 games Sherman got if things don’t go well right away? And, will Sumlin’s spread offense work as well in the SEC as it did in Conference USA with Houston?

Kevin Sumlin is not exactly Jackie Robinson. But his hiring is another sign of progress.