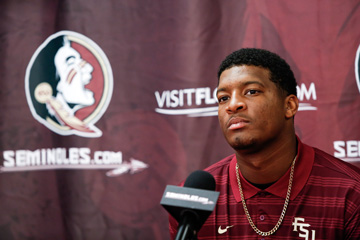 Fairly or unfairly, Florida State quarterback Jameis Winston has had to answer many uncomfortable questions from the media and the justice system over the last two seasons (Photo Credit: AP Photo/Don Juan Moore).

Jameis Winston:  Are his Troubles off the Field Fact or Fiction?

Florida State quarterback Jameis Winston has had plenty of success on the field for the Seminoles.

A two-sport athlete in football and baseball as well as the reigning Heisman Trophy winner, Winston has experienced success from the moment he took his first snap at Florida State.

But are the troubles Jameis Winston has experienced since he stepped on the grounds of the Tallahassee, Fla. Campus simply ones that come with a superstar college athlete or are they just mere witch-hunting fiction?

Eleven former Florida State quarterbacks have played in the National Football League and Winston will likely be number 12, but many people believe that Winston has some growing up to do.

A redshirt sophomore, Jameis Winston has been involved in a number of controversial incidents while at Florida State.

In a recent ESPN Sports Nation Poll of 118,839 voters, 81 percent of those surveyed said they would not want their favorite team to draft Winston if they had a need at quarterback.

The latest incident is whether the star quarterback was paid to sign autographs.

According to an ESPN report, Florida State’s compliance department is investigating whether Winston accepted money in exchange for autographs.

James Spence Authentication (JSA) has more than 950 certified Jameis Winston autographs on its website, according to the report.

JSA is the same company that certified more than 500 autographs allegedly from Georgia running back Todd Gurley, who has been serving a four-game suspension while the University of Georgia investigates the matter.

“It has to be about making the right decisions and doing the right things and being a positive role model and not putting yourself in bad situations to be talked about,” Johnson said.

At Florida State, Jameis Winston has been investigated for sexual assault stemming from December 2012, cited for shoplifting crab legs from a supermarket and was suspended for a game last month against Clemson after yelling an obscene phase while standing on top of a table at the school’s student union.

Ponder said that even though Jameis Winston has not been found guilty of anything, more should be expected of him.

“I guess you’re innocent until proven guilty, but as a quarterback at a big-time school, you want to stay out of the limelight and make sure that you’re putting yourself in the right position,” said Ponder, who met Winston once three years ago.

Just recently, Florida State University released in a statement it was publicly releasing the series of events since the incident in December 2012 because of  “misinformation in the media.”

The university didn't name Jameis Winston in the release, but referred to allegations against “a prominent athlete.”

Florida State said the only people aware of the incident before January 2013 were Tallahassee police, campus police and the Victims Advocate Program.

The program is not required to share information with school officials as a way to help victims.

The athletics department decided not to file a report with the university's Title IX administrator after Winston's lawyer said the Tallahassee Police Department was “no longer pursuing the case” and Winston and his roommates said the sex was consensual.

The press release didn't give an exact date for when the decision was made.

The university said its Title IX officials didn't become aware of the incident until November 2013, when contacted by the Tallahassee Police Department.

The police turned the case over to State Attorney Willie Meggs in November 2013. He announced he wouldn't press charges about a month later due to inconsistencies and flaws in the evidence and in the woman's memory.

The university release also states that Florida State began a Title IX investigation in December 2013, but the woman's lawyer asked officials to “cease all contact with her client.” It states that Winston met with the Title IX office on Jan. 23, but he declined to give a statement.

Florida State said in the release that there was insufficient evidence to file charges and ended the investigation with neither party cooperating. The investigation, however, could be revisited at a later date.

The university reopened its investigation after speaking with the woman in early August and the statement said it is approaching “a final resolution of the complaint.”

Seminoles head football coach Jimbo Fisher has remained confident that Winston will not miss any games this season and his confidence has not waned over the past year.

“Read the reports and read what's there,” Fisher said. “The facts are the facts. I see stories written that don't have all the facts and taint them toward their side. This country is based on being innocent until proven guilty, not guilty until proven innocent. I don't want [any victims] … but there is no victim because there was no crime. We're [publicly] convicting a guy over things that are not true based on evidence. There is no evidence.”

Florida State is currently 8-0 and ranked No.2 in the national polls.

Jameis Winston led the Seminoles to the national championship last year and has been projected to go high in the 2015 NFL draft should he decide to leave school early, but many NFL executives are watching the ever-changing incidents off the field, which could affect his draft status.