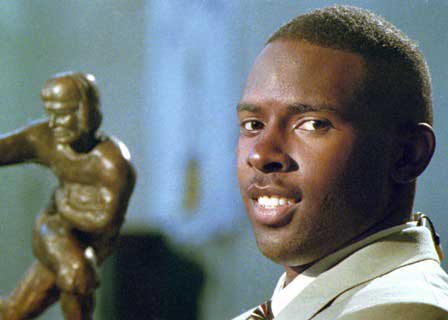 Despite winning the Heisman trophy award in 1993, Charlie Ward never played a down in the NFL (Bebeto Matthews/AP Photo).

Has Sports Most Famous Award Lost Some of its Prestige?

The Heisman Trophy award, with apologies to the Stanley Cup, is the most famous honor in sports. Voting for the trophy is accompanied by months of hype, and a one hour television special is devoted to announcing the winner.

Ostensibly, it is awarded to the most outstanding player in college football. A quick perusal of past winners indicates that it goes to the quarterback, running back or wide receiver from a well-known program that is deemed to have the most to do with a successful season.

Winning the Heisman trophy award is also not a predictor of success in professional football. Only eight of the 74 winners have been enshrined in the Pro Football Hall of Fame, and several including Gary Beban, Gino Toretta, Chris Wenke, and Matt Leinart, have been notable busts in the NFL. In spite of that, many fans seem to value the award and enjoy its tradition and everything that goes with it.

“I still believe the Heisman Trophy award has great prestige … and I don’t believe that NFL performance diminishes what the winner did during his college career,” said Paul Witkay, who spent his undergraduate years in the late 1970s watching Big 10 football at the University of Illinois.  “This is not a recent phenomenon because there have been numerous winners in the past who didn’t go on to NFL glory. What I don’t like is the ever increasing money that schools are spending to promote their own candidates.  There must be better uses for these funds.”

While many agree that the hype is excessive, UCLA grad Tony Erlick likes the conversations created by the Heisman Trophy award and doesn’t see its value tied to what a winner might do in the pros.

“I actually don’t think the award has lost any of its luster due to its lack of predictive value on a pro career.  I have never looked at it that way.  I love college football for what it is, not as a precursor to the pro game,” he said.  I like the whole build up of a college player and his exploits on the field – the quirky regional stuff, the match ups, and the comparison between conferences, competition and positions.  For me, it is much the same as not wanting football playoffs in college.  I actually like the bar room debate that these types of things bring.”

One school that really takes college football seriously is Texas A&M. Therefore, it figures that a former Aggie student (never alumni) would have a thoughtful, if not entirely positive take.

“It is certainly true that many Heisman Trophy winners have not had success in the NFL but I don’t believe the percentage of those not having success is any different than that of other highly touted draftees not having the same expected success,” said Frank Hanna who attended A&M in the 1980s. “The Heisman has lost some prestige due to the proliferation of other awards that were not given 15 – 20 years ago.  The two big awards used to be the Heisman and the Lombardi (best lineman).

Bronko Nagurski (Defensive Player of the Year – no redundancy there!)

The Heisman (Trophy award) used to have mystique. Now it is just another award.”

The lengthy list that Hanna shares makes it seem as if college football has taken a version of the philosophy now popular in Little League where every player gets a trophy just for showing up. Let Regal know what you think. Has the Heisman Trophy award lost its luster?