Evolution of Black College Quarterbacks; Stars to Watch in 2010 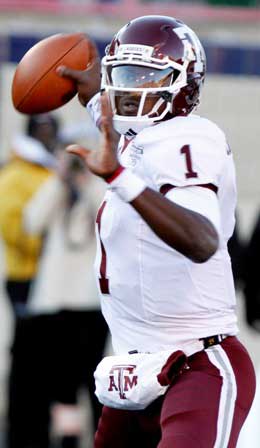 Taken for Granted Today, Black College Quarterbacks Once a Symbol of Prejudice

Since then,  Black quarterbacks like Warren Moon, James Harris, Doug Williams and Randall Cunningham rendered such thinking a canard. Now, Black college quarterbacks are common, and many of the most talented have earned spots behind center in the NFL.

Fritz Pollard of Brown was likely the first of the major Black college quarterbacks. Pollard was born on Jan. 27, 1894 in Rogers Park, Ill. and though even standing only 5’9 and weighing 165 pounds, he ran with a hard slashing style that defied his size.  At Brown as a freshman in 1915, Pollard led his team to the Rose Bowl against Washington State, becoming the first African American to play in the Rose Bowl.  In his senior year he was named to Walter Camp’s All- American first team, the first African American in the backfield.

Even though Pollard faced discriminatory tactics by fans and opposing players, including the racially insensitive song “Bye Bye Blackbird” and dressing away from his teammates, he continued to prosper in the NFL as he did in college.  He led the Akron Pros to the championship in 1920, attaining All League status and was lauded along with Jim Thorpe as the major gate attractions.  Later on he was the first African American head coach in the NFL. Pollard is in both the College and Pro Football Halls of Fame.

College quarterbacks that excelled during this period but did not receive a chance to play in the NFL included: Sherman Lewis of Michigan State, Mel Myers of Illinois, Wilbur Hollis of Iowa (QB of 1960 Big 10 Co-Champions), Jimmy Raye also of Michigan State (converted by Philadelphia Eagles to defensive back), and Sandy Stephens of Minnesota.

Stephens was the first African American starting quarterback to win a national championship in 1960.  He finished fourth in the Heisman Trophy balloting in 1961 and was drafted by Cleveland (NFL) in the second round and New York Titans (AFL) in the fifth round, but he never played in the NFL because he was never offered the chance to play quarterback.  He went to the Canadian Football League and played with Montreal in 1962 leading the Alouettes to the Grey Cup Finals.   He later signed with the Kansas City Chiefs as a fullback, but never got to play quarterback other than practice. He retired in 1968.

Eldridge Dickey of Tennessee State was drafted in the first round by the Raiders in 1968, the first Black college quarterback to receive that honor. However, he was beaten out by Ken Stabler and moved to wide receiver. The same year, Marlin Briscoe of Omaha State was drafted by Denver and did start most of the season at quarterback before being switched to wide receiver for the balance of his 11 year career.

The next decade brought in Harris, Moon, Cunningham and Williams, and Black college quarterbacks also became successful in the NFL. Now, there are a bumper crop of good ones playing college ball this year led by Terrell Pryor from Ohio State and Jerrod Johnson from Texas A&M. Here is a rundown of the starting Black college quarterbacks in Sports Illustrated’s Top 25.

Tyrod Taylor, Virginia Tech: Started every game for the Hokies in 2009. Won the George Preas award as the offensive MVP of the spring. Taylor also earned the President’s Award as the offensive player who demonstrated the most outstanding leadership during the off-season program and spring workouts. Threw for over 2300 yards last season.

Jordan Jefferson, LSU: Second youngest starting quarterback in LSU history last season as a sophomore at age 19. In 12 games, completed 182-of-296 passes for 2,166 yards with 17 touchdowns and seven interceptions. His 17 touchdowns tied for eighth in the LSU single-season annals, while his 182 completions ranked ninth in school history.