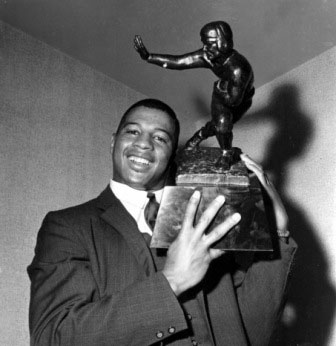 Ernie Davis was the first African American to win the Heisman Trophy. It was such big news at the time that President John F. Kennedy was compelled to send the following message:

Seldom has an athlete been more deserving of such a tribute. Your high standards of performance on the field and off the field reflect the finest qualities of competition, sportsmanship and citizenship. The nation has bestowed upon you its highest awards for your athletic achievements. It’s a privilege for me to address you tonight as an outstanding American, and as a worthy example of our youth. I salute you.

This year Robert Griffin III beat out Andrew Luck, among others, for the Heisman and the fact that a Black athlete was voted in over a viable White candidate who is universally seen as a great quarterback and a good person was not the least bit newsworthy from the race angle. President Barack Obama did not make any public pronouncements, and the media coverage was centered on the vote and how Griffin’s late season heroics helped him surge past presumptive front-runner Luck.

A lot has changed since 1961. It has become routine for Black athletes to win the Heisman, including 29 of 50 awards since Davis won. Mike Garrett was the second athlete to win it in 1965 and O.J. Simpson followed in 1968. From 1974 to 1983, 10 winners in a row were African American. Sam Bradford in 2008 is currently the last Caucasian to take home Heisman hardware from New York’s Downtown Athletic Club.

Before 1961 it was routine for Black stars to get snubbed. In 1956 Jim Brown lost out to Notre Dame Quarterback Paul Hornung. Hornung led the Irish to a 4-5 record that season and was so good as a quarterback that he had a Hall of Fame career in the NFL as a halfback. Ollie Matson, Dick Bass, and Buddy Young are among other African Americans who delivered Heisman worthy seasons before Davis was able to break through 50 years ago.

There are other college football changes. No one thinks twice about a Black quarterback, even in the SEC. Speaking of the SEC, until the early 1970s Blacks were not welcome on the field in Alabama, Mississippi, Florida, Georgia, Tennessee, Louisiana or Kentucky; all states who recited a pledge promising liberty and justice for all. It took a beating administered by Sam Cunningham and USC at Alabama in 1972 for change to take place. It seems fielding the best possible team had finally trumped White supremacy, at least on athletic fields and courts.

Regal readers should take the time to ask their fathers and grandfathers about college football changes. Did they ever think they would see a game between Mississippi and Mississippi State where all 22 players on the field were African American? It has happened many times over the past decade.

Progress towards a true meritocracy always has a price. Like the Negro Leagues in baseball, the SWAC has suffered on the field with top Black players able to go to bigger schools with higher-profile programs. So far, the SWAC has survived as an alternative for the slightly smaller and slightly slower to still play in front of large and enthusiastic crowds on Saturday afternoons with all the attendant pomp and pageantry.

Sure, there is still room for improvement. Black head coaches are sorely underrepresented at the FBS level. There are few African American play-by-play announcers and most of the money in college football is handled by Whites. Regal’s hope is that over time those things will also change. None of that is as improbable as 10 consecutive Black Heisman winners would have seemed when Davis was first.

What is the biggest sign of progress regarding college football changes? In Regal’s mind, it is that such change often goes unnoticed. That is true progress.