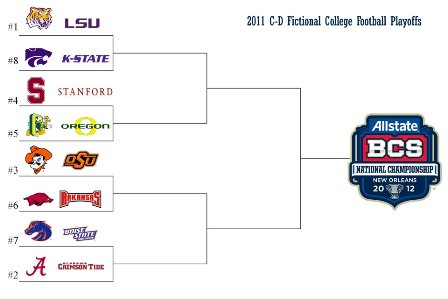 Many believe a BCS playoffs with eight or 16 teams is much better than proposed football final four.

The powers that be in college football are once again tinkering with the format for choosing a national champion.

Originally, the national champion was selected by newspaper polls. The Associated Press, United Press International, and various other institutions of experts and sportswriters would vote all season after each game and the final poll at the end of the regular season would decide the national championship.

Until the late 1960s, the bowls were thought of as a reward and a post-season exhibition and there were no polls following the bowls, so on several occasions the so-called national champions would lose their bowl game, creating some teeth gnashing.

So then a final poll was added after New Year’s Day, ending that problem but exacerbating another. The bowls, you see, all had conference affiliations. That meant that if the two remaining undefeated teams were from the Big 10 and the Big 8 they could not play each other because the Big 10 champion was committed to the Rose Bowl and the Big 8 champion was committed to the Orange Bowl. If both won their bowl games there would either be a very unhappy second place finisher or Co-National Champions if different polls had different leaders.

This created further teeth gnashing, which then led to the Bowl Championship Series, or BCS. This was a split-the-baby solution whereby the traditional bowls continued and the BCS Championship Game would rotate between those bowls.

After a few years of that, the rotation stopped and through this year there was a BCS Championship Game after the bowls between the first and second ranked teams according to a labyrinth formula spit out by the BCS computer.

Of course, subjectively selecting the participants in a championship game created still more teeth gnashing and a complete BCS controversy.

This year, LSU was forced to try to beat Alabama a second time, and failed, creating a one-loss National Champion that didn’t even win its conference. That, plus similar problems in other years have led the BCS to strongly consider a four-team BCS Playoff series.

The details are not finalized, but most observers believe the four-team BCS Playoff will begin in 2014. The question for fans: is this a step in the right direction and is it enough?

“Neither the current BCS system nor a four team playoff as proposed satisfies me,” says Texas A&M graduate Frank Hanna. “Unfortunately, the change to the BCS format and any other change proposed, has served only to take the focus off of what I love, the college football game itself.

“The original bowl format and polls should have never been abandoned.  Tradition runs deep throughout the college game, or at least it used to.  The Cotton, Orange, Sugar and Rose were the pinnacles and provided a great start to the New Year.  The polls got it right 99 percent of the time and we all debated the rest of the year with what ifs and if only.”

Another fan, Steve Kurzet, thinks the current format does not represent enough change. “I think it (is) a step in the right direction but probably not enough for the true supporter of a national playoff system. College football sports writers have to be removed from the process of determining a national champion if for no other reason but that the system discriminates against west coast teams.” Kurzet grew up in Southern California.

USC alum Pratt Bhatt also thinks the proposed BCS Playoff format does not go far enough. “It seems much better than the black box non transparent BCS system but not sure they went far enough with only four teams – so better than before but they could have gone further.”

Bhatt and Kurzet probably represent a majority viewpoint. A four team playoff is better than two arbitrarily selected teams meeting in one game, but it’s not enough.

Motivated advocates of change could find a way to include the bowls in a playoff system which would create games that are more meaningful and a champion that could be embraced by all.

The NCAA Basketball Tournament is a $2 billion exercise; imagine what a true BCS Playoff system would generate in fan interest and TV money.

Regal Magazine believes the time has come for the top 16 teams to meet in a four-week-one-and-done tournament to determine a true college football champion.