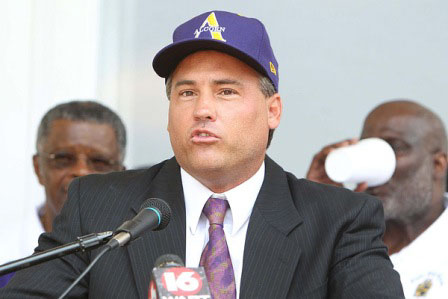 White coaches like Alcorn State’s Jay Hopson have not always been welcomed with open arms at HBCUs. (Bossip)

Are White Coaches Welcome at HBCUs?

American Blacks are used to dealing with racism. We’re subject to selective law enforcement if we’re driving a luxury car in a White neighborhood; we often have to lap the field when competing for a job; and we usually have quite a mountain to climb when we’re brought home to meet our future White in-laws.

The recent hiring of Jay Hopson, who is White, as the head football coach at Alcorn State has Regal wondering how much better we are in situations where Blacks are in the majority and are making the hiring decisions and how have other White coaches fared at HBCUs?

Hopson is thought to be the first White head football coach in Southwestern Athletic Conference history.

By all accounts, Hopson is eminently qualified for this $150,000 per year job.

Hopson was also an Academic All-SEC selection while playing safety at Mississippi from 1988-1991.

So basically we have a White coach with brains who has lived and worked in the South, and has been on the staff at some of the most prestigious NCAA football programs in the country.

Yet, there are rumblings. Alcorn President Christopher Brown told the Gannett Clarion Ledger that a very small group of alumni – said to be four or five people – got the message to him indirectly that they didn’t like the idea White coaches at their alma mater.

“Their issue, and what I helped them to understand, was they were using race as a proxy for culture,” he said.

“This was the question: Could we bring a Joe Paterno or a Nick Saban into rural southwest Mississippi and he be comfortable and successful?” he said.

But Brown explained to these alums that Hopson grew up in Vicksburg, Miss. Brown believed that would soothe their concerns.

Hopson, though a historic hire, is not the first White coach or leader at Alcorn. Brown pointed out that Anthony Dodgen, head tennis coach, is White, and so is Thomas Matthews, head golf coach. Several administrators are White or of other ethnicities.

“The reality is all of the taxpayers in Mississippi – Black, White, red or yellow – pay for all eight of these campuses,” Brown said, “and so all of the state needs to be represented.”

Still, Robby Wells, the White former head football coach at Savannah State University (SSU), an HCBU in Georgia out of the Mid-Eastern Athletic Conference, recently won a $240,000 race discrimination suit, claiming that he was discriminated against for becoming engaged to a Black woman.

Wells also charged that five White players he recruited were not offered scholarships after he left in 2010.

The school countered that problems with Wells had been growing since he was hired in 2007.

SSU cited that issues ranging from his refusal to follow protocol to misuse of travel funds had strained the relationship.

Despite agreeing to the terms of the settlement, neither the school nor the Board of Regents has admitted to wrongdoing, leaving Regal to wonder if SSU paid Wells nearly a quarter million dollars for no reason.

The broader issue is how those in the majority behave when someone different from them attempts to infiltrate what has been their domain, not just the narrow issue of White coaches at HBCUs.

The history of human relations; from the Philistines, to the Egyptians, to the Romans, to the American Civil Rights movement, all the way up to discussions of same-sex marriage today, suggests that those in control are reluctant to accept anyone or anything much different from themselves or what they believe.

Are White coaches at HBCU football programs part of this pattern?

Are African Americans any better when it comes to the institutions we control? Should we strive to be?

In sports terms, did we as American Blacks learn as much as we should have from the plight of Jackie Robinson 65 years ago?