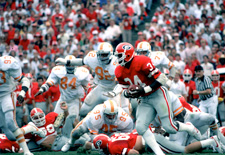 Prior to winning the Heisman Trophy in 1982, Walker was the most dominant running back in the country as a true freshman in 1980. At 6’1, 225 pounds, Walker possessed the size, speed and power to sprint past any defender standing in his way. In that freshman year, Walker rushed for 1,616 yards, averaging 5.9 yards per carry and scoring 16 touchdowns while carrying Vince Dooley’s Georgia Bulldogs to a perfect 12-0 record and a national championship. In 12 NFL seasons with four different teams, Walker gained 8,225 rushing yards, 4,859 receiving yards, and 5,084 kickoff-return yards for 18,168 total combined net yards, ranking him second among the NFL’s all-time leaders in total yardage. However, he would be remembered most for the blockbuster trade that sent him to the Minnesota Vikings in which Dallas would receive eventual Hall of Fame running back Emmitt Smith.

An unheralded runner who was recruited initially as a defensive back, Faulk came from the Lower Ninth Ward in New Orleans and would make a splash in his second college game.  Faulk posted 37 carries for a then-NCAA record 386 yards and seven TDs against the University of the Pacific in just his second college game. Faulk finished his true freshman season with 1,630 yards from scrimmage, on 7.5 yards per touch, and 23 total TDs. After being selected No. 2 overall in the 1994 NFL draft, Faulk would play 13 seasons in the NFL and is one of only three NFL players (Marcus Allen and Tiki Barber being the others) to reach at least 10,000 rushing yards and 5,000 receiving yards. He is the only one to amass 12,000 yards rushing and 6,000 yards receiving. In what was widely known as the “Greatest Show on Turf,” Faulk was a catalyst on the St. Louis Rams Super Bowl championship team in 1999. Faulk was elected to the Pro Football Hall of Fame in 2011.

The legend of “Johnny Football” has reached tall tale proportions and rightfully so. Manziel completed 68.3 percent of his passes for 3,419 yards, 24 TDs and eight INTs in the air, while showing off the open field moves of a punt returner en route to 1,181 yards and 19 trips to the end zone on the ground. The Aggies’ redshirt freshman signal-caller’s signature game came in a 29–24 win on the road at Alabama, where Manziel completed 24-of-31 passes for 253 yards, two TDs and zero INTs, while rushing for another 92 yards and all but locking up that year’s Heisman Trophy. Manziel was selected by the Cleveland Browns as the 22nd pick of the first round in the 2014 NFL Draft, however, so far, Manziel has yet to make an impact on the football field. Fellow quarterback Brian Hoyer was named the starter over Manziel for the opening regular season game. Manziel made his regular season debut on Sept. 14 against the New Orleans Saints, handing off twice to Isaiah Crowell and throwing an incomplete pass intended for Ray Agnew. So far this season, Manziel has served as Hoyer’s main backup quarterback with the Browns.

Known as “All Day” since he set foot at the University of Oklahoma, Peterson got off to a quick start with the Sooners, leading the country with 339 carries for a freshman record 1,925 yards and 15 TDs as a true freshman. Peterson led Oklahoma to a BCS national title game appearance, set the freshman record for 100-yard games in a single season with 11 and was runner-up to USC quarterback Matt Leinart in the Heisman Trophy voting — the highest a freshman had ever finished at the time. Peterson became the sixth fastest player to reach 8,000 rushing yards, ending the 2012 season with 2,097 rushing yards, just nine yards shy of breaking Eric Dickerson’s single season all-time record. During the 2013 season, Peterson became the third fastest player to reach 10,000 rushing yards in NFL history. News caught up with Peterson off the field as he was indicted on Sept. 11, 2014 by a Montgomery County, Texas, grand jury on charges of reckless or negligent injury to a child that occurred on May 18, 2014.  He is accused of beating his four-year-old son with a tree switch, causing severe welts and bleeding on the child’s back, legs, buttocks, genitals and ankles. In their initial response, the Vikings deactivated Peterson for a single game. He is currently on the commissioner’s exempt list awaiting possible reinstatement to the NFL.

At the University of Pittsburgh, Dorsett became the first freshman in 29 years to be named All-American. He finished second in the nation in rushing with 1,586 yards in 11 games and led the Pittsburgh Panthers to its first winning season in 10 years. He was Pittsburgh’s first All-American selection since the 1963 season, when both Paul Martha and Ernie Borghetti were named to the first team. His 1,586 rushing yards at the time was the most ever recorded by a freshman, breaking the record set by New Mexico State’s Ron “Po” James in 1968. In his senior season in 1976, Dorsett led the Pitt Panthers to a national title, led the nation in rushing with 2,150 yards and won the Heisman Trophy. Dorsett rushed for 12,739 yards and 77 touchdowns in his 12-year NFL career. On Jan. 3, 1983, during a Monday Night Football game in Minnesota, Dorsett broke a 99-yard touchdown run against the Vikings, which is the longest run from scrimmage in NFL history.

The Ducks’ ironman is better known for being the quarterback drafted No. 1 overall by the Baltimore Colts in the 1955 NFL Draft. Shaw hauled in a freshman-record 13 INTs for 136 return yards in just 10 games as a freshman cornerback. The mark remains just one shy of the FBS all-time single-season INT record, trailing Washington’s Al Worley’s 1968 mark by only one INT.  Shaw quickly became the starting quarterback in the 1955 NFL season, but in the early part of the 1956 season he suffered a broken leg and was replaced by rookie backup Johnny Unitas. As Unitas embarked on his legendary career, Shaw lasted two more years in Baltimore as the backup before being traded to the New York Giants, where he played two seasons. Shaw played one season with the Minnesota Vikings, where he started the first game in franchise history but was replaced in the first half by rookie backup Fran Tarkenton who took over the starting job. He also played one season with the Denver Broncos of the American Football League before retiring from football in 1962. In 1998, Shaw would die after battling a long illness in his hometown of Portland, Ore.

In his first collegiate start, Smith promptly broke Florida’s 57-year-old all-time single game rushing record, carrying 39 times for 224 yards and two touchdowns as the Gators upset the Alabama Crimson Tide in 1987. Smith went on to break the 1,000-yard barrier in the seventh game of his freshman season, the fastest any running back had ever broken that barrier to begin his college career. He finished the season with 1,341 yards and was named Southeastern Conference and National Freshman of the Year. Smith was taken 17th overall in the 1990 NFL Draft. Smith was the first player in NFL history to rush for 1,400 rushing yards or more in five consecutive seasons. Smith, Jim Brown, and LaDainian Tomlinson are the only players with seven straight 10-touchdown seasons to start their careers. With 1,021 rushing yards in 2001, Smith became the first player in NFL history with 11 consecutive 1,000-yard seasons and the first to post 11 1,000-yard rushing seasons in a career.

He is the NFL’s all-time leader in rushing attempts with 4,409. Smith is the only player to post three seasons with 19 or more touchdowns. He also holds the record for most games in a season with a touchdown and most games in a season with a rushing touchdown (15), set in 1995. Smith currently holds the NFL record in career rushing yards with 18,355, breaking the previous record held by Walter Payton on Oct. 27, 2002. He leads all running backs with 164 career rushing touchdowns and his 175 total touchdowns ranks him second only to Jerry Rice’s 208. The total of his rushing yards, receiving yards (3,224) and fumble return yards (−15) gives him a total of 21,564 yards from the line of scrimmage, making him one of only four players in NFL history to eclipse the 21,000-combined yards mark.

The first two-time winner of the Biletnikoff Award as the nation’s top wide receiver, Crabtree won the triple crown of pass-catchers by leading the country with 134 catches for 1,962 yards and 22 TD receptions. After switching positions from quarterback to receiver, the redshirt freshman out of Dallas’ Carter High School quickly established himself as the greatest first-year receiver in college football history. Crabtree was taken 10th overall in the 2009 NFL draft. In 2012, Crabtree posted his best season with 85 receptions, 1,105 yards and nine touchdowns. Texas Tech University honored Crabtree by incorporating a large mural as a part of the expansion to the universities’ football stadium. In his sixth NFL season, Crabtree has career numbers of 319 receptions, 4,053 yards and 25 touchdowns.

Vick’s reputation has always preceded him, but back in 1999 that meant something entirely different. The redshirt freshman out of Newport News, Va., was supposed to revolutionize the quarterback position with his cannon left arm and track star speed. The “Michael Vick Experience” was everything it was hyped to be, as No. 7 became the first freshman quarterback to lead his team to the national championship game, while also tying Herschel Walker’s then-freshman-record third-place finish in Heisman Trophy voting. Vick was selected first in the 2001 NFL Draft by the Atlanta Falcons, becoming the first African-American quarterback to be taken with the top pick. With the Falcons, he became the first quarterback to ever rush for over 1,000 yards in a single season. In August 2007, hours after Vick pleaded guilty to federal charges in the Bad News Kennels dog fighting investigation, the NFL suspended him indefinitely without pay for violating its player conduct policy. He enters his 12th NFL season now as the starting quarterback for the New York Jets. He is the only quarterback in NFL history to pass for over 20,000 yards and have 6,000 career rushing yards.

Although Clarett has become a cautionary tale and a punch line of jokes, he was the best player on Ohio State’s undefeated 2002 national championship team. The local product out of Youngstown’s Warren Harding High School graduated early, participated in spring practice and went on to rush for 1,237 yards on 5.6 yards per carry, and 18 TDs in his first season for the Buckeyes. In the national title game, Clarett stripped Miami safety Sean Taylor on an INT return before scoring the game-winning TD in overtime — his final carry as a college player. Clarett was drafted on the first day of the 2005 NFL Draft with the final pick of the third round (#101 overall) by the Denver Broncos. Many experts felt that he would fall to the sixth or seventh round, if he were even drafted at all.  However, Clarett turned out to be unimpressive in the Denver Broncos’ preseason training camp. In part due to having not played a game in two years or practiced in over a year, he entered training camp weighing 248 pounds, more than 20 pounds overweight. He was also slow to recover from an injury.  Despite his unimpressive training camp, Clarett signed a four-year contract on July 28, 2005 with the Broncos in which he gave up $413,000 of guaranteed money in order to secure an incentive-laden deal. Clarett signed this deal against the advice of his former agents. Clarett’s motivation was to replace the proposed deal with a package that would pay him first-round money if he rushed for 1,000 yards in multiple seasons. However, after further disappointments and incidents with his coaches and never playing a preseason game, Clarett was released on waivers in August 2005, only a month after signing his contract and before playing even a single down in the NFL.