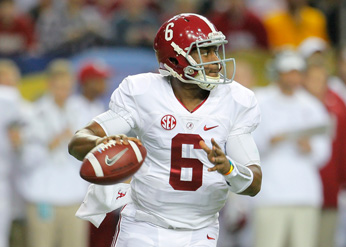 The play of Alabama quarterback Blake Sims will be key if the Crimson Tide are to win the first college football Final Four (Photo Credit: Icon Sportswire via AP Images).

Oregon Strengths: Winning the Pac-12 championship. Oregon’s 38-point win against Arizona made up for the fact that the Wildcats gave the Ducks their only loss of the season. But when you come back and absolutely dominate that opponent in the most important game of the season, those wounds seem to heal pretty quickly. Quarterback Marcus Mariota had more than one Heisman moment and finished the day with three rushing touchdowns and two passing touchdowns.

Oregon Weaknesses: Remember the 31-24 loss to the Wildcats in Eugene back in early October? The Ducks could’ve been undefeated had they not laid an egg against the Wildcats in their first encounter. The Ducks’ defense looked confused and scatterbrained, giving up 495 yards of offense and letting redshirt freshman quarterback Anu Solomon and freshman running back Nick Wilson look like All-Americans.

Florida State Strengths: It begins with the fact that the Seminoles were the only team to finish the regular season undefeated, and they did it with three nonconference games against Power 5 opponents. While FSU had to sweat out nearly all of its victories, the Seminoles received every team’s best shot. Their ACC season was littered with come-from-behind wins and it began with an overtime win vs. Clemson without quarterback Jameis Winston. After he returned to the lineup, Winston orchestrated game-winning fourth-quarter drives against Notre Dame, Louisville, Miami and Boston College — all of which came over a five-game period.

Florida State Weakness: With an undefeated record, all of the lowlights came off the field. Winston was suspended for screaming a sexually charged phrase near the hub of the campus. Karlos Williams was investigated for assaulting his live-in ex-girlfriend, who was pregnant with the couple’s second child. And the ruling from Winston’s student code of conduct hearing should come down soon. The other lowlights came every Tuesday after the midway point of the season. Each week the College Football Playoff rankings were released, the Seminoles walked away from the television feeling slighted.

Outlook: Florida State has become a polarizing program over the past 13 months despite Winston’s transgressions and Coach Jimbo Fisher’s public defense of Winston and the selection committee’s opinion of a team on a 29-game winning streak. That has generated the popular us-against-the-world mentality in the FSU locker room. That’s been the source of motivation much of the season for the Seminoles. On top of that, the team is chasing history. Never has Florida State posted back-to-back undefeated seasons or national championships. It can do both. This is the season. The Ducks almost have it all — including the big names, and their flashy style — but what they don’t have is a national title. And in the first year of the college football Final Four, it’s within their reach. The chances Mariota returns next year are pretty slim. He’s surrounded by huge playmakers on offense and a defense that has made major strides in the second half of the season. This roster has the talent to win a national title, and if Oregon wants a chance at glory anytime soon, this seems to be the season.

Alabama strengths: It hasn’t always been pretty but Alabama has found ways to win. Sometimes it’s been a strong defense, sometimes it’s been a prolific offense, and sometimes it’s been a bit of both. The common thread between all those games has been quarterback Blake Sims.  When he hasn’t put up monster numbers, as he did against Texas A&M and Florida, he’s turned it on late to lead game-clinching drives against Arkansas, LSU and Mississippi State. He threw three interceptions against Auburn and then came back to lead five touchdown-scoring drives in a row to win the game

Alabama weaknesses: There haven’t been many complete performances from coach Nick Saban’s squad. Florida and Texas A&M might be the only two marquee games to fall under that category. The rest were a hodgepodge of mistakes, whether it was turnovers on offense or the defense relenting late. The Iron Bowl summed up Alabama’s struggles most succinctly. Sims threw three interceptions, the defense was scored on with ease, and the team faced a double-digit deficit in the second half. All told, Sims had his worst game of the season, the defense gave up the most yards in school history, and somehow the Tide won. It’s living life on the edge, but as we’ve seen this season, no one in college football is perfect.

Ohio State strengths: With the Buckeyes all but ruled out of the college football Final Four and the Big Ten East Division race after losing quarterback Braxton Miller during training camp, J.T. Barrett stunningly emerged as a legitimate Heisman Trophy contender in his place as a redshirt freshman. During his 45-touchdown campaign, he played an almost perfect game to knock off Michigan State on the road and lead the Buckeyes to a division title.

Ohio State weaknesses: Barrett would suffer a season-ending injury of his own in a win over rival Michigan the week before the Big Ten title game, but the lowest point for the Buckeyes was still the Week 2 loss to Virginia Tech. Barrett was making just his second start, but he struggled behind an inexperienced offensive line, finishing with three interceptions and being sacked seven times in a defeat that cut Ohio State’s margin for error down to zero.

Outlook: In seasons past, you could hope to catch Alabama sleeping. The Crimson Tide had won three titles in four years, and it was almost expected that opponents would clear a path to victory. But ever since last season’s Iron Bowl and the Sugar Bowl that followed, things have changed. It’s a scary thought considering all the talent on Saban’s roster, but the Tide is now playing with a chip on their shoulder. They want to show Alabama football is back, and that means winning another national championship. Urban Meyer broke through with his first postseason victory with the program in the Big Ten title game, but Ohio State won’t be happy to settle for just that trophy this season. The Buckeyes are coming off perhaps the most complete performance since Meyer took over, thumping Wisconsin despite having to turn the offense over to third-string quarterback Cardale Jones and they will no doubt be looking to prove that their storied program is back for good as a national contender.

Florida State Strengths: The Seminoles are still perfect and have the experience in playing in close games against upper tier competition. Running the table in the Atlantic Coast Conference starting with an overtime win vs. Clemson and ending up with a close victory vs. Georgia Tech in the ACC Championship Game. Quarterback Jameis Winston has experience in playing in close games and despite all of the distractions off the field, Florida State continues with a winning streak that is going on two years.

Alabama Strengths: The Crimson Tide has the experience of playing in championships in both conference and national title games. Alabama can play both ways, a high-scoring game and a defensive struggle. Despite having a loss this season to Mississippi State, the Crimson Tide continued to roll with victories over LSU, Ole Miss, and Auburn and in the SEC Championship Game against Missouri. Head coach Nick Saban does a great job in preparation when given time to prepare for an opponent and is going for his fifth national championship over a 12-year span.

Outlook: Florida State and Alabama are two of the most storied programs in the history of college football. A possible showdown between the Seminoles and the Crimson Tide means national championships, large and passionate fan bases, future NFL players and outstanding coaches. This could be the first meeting between Nick Saban and Jimbo Fisher on opposite sides since they were together at LSU winning a national championship together in 2007.  Alabama was its typical dominant self and only lost one game all season. Among the impressive wins were a 59-0 beat down of Texas A&M, an overtime win at LSU, a victory over then-No. 1 Mississippi State, a shootout win over Auburn and a blowout of Missouri in the SEC Championship Game. Florida State will probably play one of the most physical defenses they have seen all season. Last season they defeated Auburn in a close game to capture the national title. This possible matchup will be just as close.