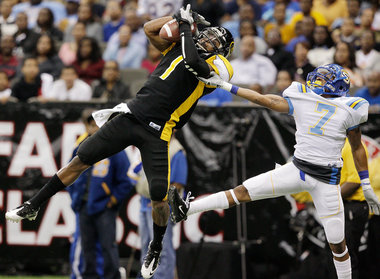 Norfolk State lost to Old Dominion 35-18 last Saturday in the first round of the Football Championship Subdivision playoffs.

The Spartans (9-3, 7-1 MEAC) took an early 7-0 lead on a 98-yard touchdown pass from Chris Walley to Derrick Demps. It was their only lead of the game.

Old Dominion (10-2, 6-2 CAA) showed their dominance after the Spartans’ early score. The Monarchs scored 21 consecutive points to lead 21-7 at halftime.

Taylor Heinicke threw two more touchdown passes for ODU in the third quarter of two and 18 yards, respectively. The Monarchs led 35-7 at that point.

Norfolk State scored in the final period to bring the deficit to 17 but they got no closer.

The Spartans were the only team from an HBCU conference in the FCS playoffs as first time champions of the MEAC.

Walley ended the day with 363 yards passing on 28 of 43 completions, two touchdowns and two interceptions.

Heinicke passed for 269 yards and five touchdowns for Old Dominion.

Tim Clark added another score for Alabama State in the second quarter with a 17-yard TD run to give them a 23-7 lead at halftime.

Tuskegee (4-6) mounted a comeback in the second half with a 31-yard interception return for a touchdown and a touchdown run by DeMario Pippen to pull the Golden Tigers within two, 23-21 with 12:41 remaining.

Clark ended any possible Tuskegee comeback with a one-yard TD run with 1:20 left in the fourth, preserving the nine point win.

Alabama State outgained Tuskegee 455-270 in total offense despite having the ball for 24:19.

Jenkins passed for 167 yards for the Hornets before leaving the game with a broken hand injury.

The Turkey Day Classic has been played since 1924, however both teams first played each other in 1901, making this contest the oldest Black college football classic.

Southern (4-7, 4-5) came within five (17-12) when Dray Joseph threw a five-yard strike to Michael Berry. The following two-point try was unsuccessful.

Grambling put the game out of reach with 19 consecutive points which consisted of two touchdowns, a field goal and a safety.

The win clinches the Tigers a SWAC West Division title and a spot in the 2011 SWAC Championship game on Dec. 10 in Birmingham, Ala. versus East division winner Alabama A&M.

The Tigers end the regular season on a six game win streak and have now won the last four Bayou Classics.

The Bayou Classic has been played since 1974 and is the only Black college football classic shown on network television.