Is there a Racial Element to Tebow-Mania? 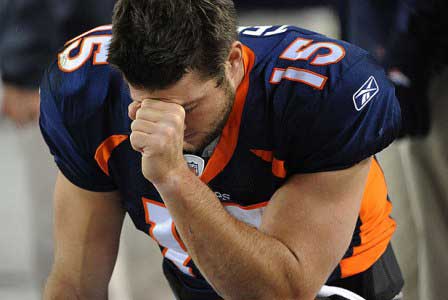 Is there a Racial Element to Tebow-Mania?

Anyone watching, listening or talking about the NFL this season has been inundated with talk of Tim Tebow, to the point of Tebow-mania. Certainly his dramatic overtime heroics in Sunday’s playoff win over Pittsburgh has done nothing to calm the Tebow dominated airwaves.

The question for many Regal readers is the degree that race is playing into all the attention Tebow is getting. There have been Black quarterbacks with unorthodox passing styles running non-traditional offenses who were devout Christians, like Vince Young and fellow Heisman Trophy winner Charlie Ward, who have not received anything like the notoriety of Tebow.

According to North Carolina resident, Steve Kurzet, 54, a lot of that has to do with what Tebow has accomplished. “I wouldn’t put Vince Young or Charlie Ward in Tebow’s category. In Young’s case, he hasn’t shown that he’s a consistent winner or team player and Charlie Ward didn’t play a down of pro football, opting instead to sign with the Knicks out of college.  Neither of those examples holds any water so far as a conversation relating to Tebow is concerned because neither of them has demonstrated that they are the football player Tebow is.”

Kurzet also believes that the attention that Tebow is getting based on his faith has very little place in a discussion of football. “I don’t think that he should receive any attention because of his beliefs, not that his faith isn’t commendable or that he isn’t a good role model. I believe him to be both and question anyone that wouldn’t want this kid for their own son…Nevertheless, his beliefs shouldn’t be germane to the conversation regarding his talent (or lack depending on what side of the argument you’re on) on the football field.  He shouldn’t be praised or castigated for his religious beliefs.”

Jack Saunders, 66, of Oakland, is a Professor of News Media and Public Opinion at Golden Gate University in San Francisco and has followed the NFL for more than 50 years. He says that race could be an element of Tebow-mania. “My observation is that White evangelicals tend to be more, well, evangelical than the Black faithful — as in more pushy, more sales-oriented, more keen to proselytize and convert.  My sense is that Black folks express their heavenly joy in the pews, while the White folks may be more likely to take it to the media (certainly if they have any natural access to the media, as in a pro athlete).

“By all accounts,” says Saunders, “(Tebow) seems a genuine believer with some rather unusual Christian follow through (visiting the sick, caring for the poor, etc.)  These idols, however, have a wretched track record for ‘feet-of-clay’ syndrome.  He’s one Hugh Grant away from becoming a figure of fun, if not an out and out Tiger Woods.  I hope his handlers have covered this point with some urgency.  He is, after all, at the end of the day, a 20-something male.”

While it is highly doubtful that players make professional teams or get cut in the 21st century based on race, there is no doubt that the attention they get for their exploits on the field and off still has a racial tinge. There is also no doubt that an element of Tebow-mania is that the White majority in the audience can identify more easily with him then with Young or Ward, or Donovan McNabb for that matter. It’s also true that the Broncos’ record with him as the starting quarterback is much better than it is without him. And he won a playoff game against a team that has been to two of the last three Super Bowls.

Tebow’s background is so unique that it is impossible to have a definitive reason for why this story has such amazing legs. There is one thing we do know. If Tebow and the Broncos can beat Tom Brady and the Patriots in Foxboro this weekend, Tebow-mania to date will look like a high school sports story compared with what would be on the horizon.