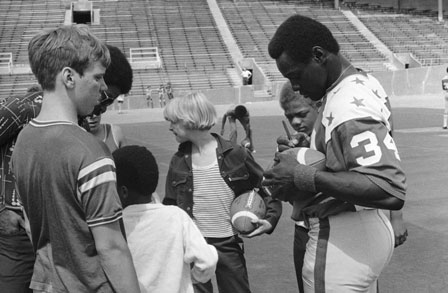 From Barrier Breakers to Record Breakers

No offense to Jim Brown and Barry Sanders, but many football pundits rate Walter Payton as the greatest running back in the history of the NFL.

Many of the greatest running backs in league history have come from the African American community so it seems hard to believe that barriers had to be broken for the likes of Payton to get his chance in the NFL.

In 1949, Grambling State running back Tank Younger became the first HBCU player to make it to the NFL.  What followed were some of the greatest football players, at any position, to grace the professional gridiron.

This year’s Pro Football Hall of Fame ceremony, which saw three players from HBCUs, Claude Humphrey (Tennessee State), Michael Strahan (Texas Southern) and Aeneas Williams (Southern), inducted, would not have been possible without pioneers like Younger and those that followed.

Although running back has become a devalued position in the pros, RegalMag.com honors the top five HBCU running backs of all time.

1)    Walter Payton (Jackson State)—If any publication, RegalMag.com included, ranked the best HBCU running backs of all time and “Sweetness” did not rank number one, the rest of their existence in media should be as sour as sour can be.  Payton was Jackson State Tiger football from 1971-1974.  The future Super Bowl champion did everything from running the “rock,” to throwing the “rock” to eventually kicking the “rock.”  He was a consensus first team All-American in 1973 and 1974 according to D2FootballHallofFame.com.  And before being drafted in the first round by the Chicago Bears, Payton amassed 3,563 yards on 584 carries, while throwing for 474 yards, for a total of 4,037 all-purpose yards.  According to D2FootballHallofFame.com, “He added five field goals and 53 extra points for 464 total points.”  Now, how sweet is that?

2)    Leroy Kelly (Morgan State)—Playing behind Jim Brown in the NFL can overshadow anyone.  However, creating one’s own legacy after playing behind one of the greatest of all time shows how special Leroy Kelly was with the Cleveland Browns.  That star quality was nurtured at Morgan State, however, not in Ohio.  According to MorganStateBears.com, “In 1962, when the Bears won the CIAA Championship, Leroy Kelly led the team in rushing, scoring and punting.  In 1963, Kelly was selected by the press as Morgan’s Most Valuable Player in the Orange Blossom Game during a season in which he averaged better than 5 yards a carry for Morgan.”

3)    Tank Younger (Grambling State)—Paul “Tank” Younger was simply ahead of his time. In another era, his name would be a household name but since he played before the Civil Rights Movement and integration, he had to settle on being the first HBCU player to play in the NFL in 1949.  Coach Eddie Robinson warned Younger that since he was voted as the best football player from a HBCU, he had to succeed with the Los Angeles Rams because if he did not others would not get the same chance.  His success on the field, and later in the front office, paved the way for others like Walter Payton, Jerry Rice and Doug Williams who shattered all the stereotypes that Black players faced.  According to NOLA.com, “Younger had starred at Grambling under Robinson, scoring 60 touchdowns during his four seasons at the school.  He scored nearly half of those touchdowns as an offensive tackle, when Robinson created a tackle-eligible end-around play before Younger moved to running back.”

4)    Willie Galimore (Florida A&M)—The “Gallopin’ Gal’ averaged 9.5 yards per carry for FAMU in 1956.  Let that marinate for a minute.  That same year, he also rushed for 295 yards in one game against Tennessee State.  Despite his marvelous exploits during his senior year with the Rattlers, the future running back for the Chicago Bears was not a one hit or one-year wonder.  His greatness lasted his entire four-year career in Tallahassee, Fla.  According to FootballFoundation.org, “He was All-Southern Intercollegiate Athletic Conference choice four times and was named Black college All-America by the Pittsburgh Courier three times.”  His Rattler teams also won four conference championships and one Black college national championship during his tenure.

5)    Bob Hayes (Florida A&M)—Robert “Bullet Bob” Hayes was the definition of an all-purpose player at FAMU.  He played everything from running back to wide receiver when he was not destroying his track and field competitors at the 1964 Olympics in Tokyo.  RegalMag.com could have easily ranked him as one of the best receivers in HBCU history, but he is also one of the best running backs as well.  According to FAMU.edu, “In football at FAMU (1961-64), Hayes was a multi-purpose performer, lining up as a halfback, wingback or receiver.  He scored a team-high 11 touchdowns as a junior in 1963, leading the team in punt returns in 1962 and 1963, while leading FAMU in kickoff returns all four years, averaging an incredible 34.3 yards per return as a freshman in 1961.”