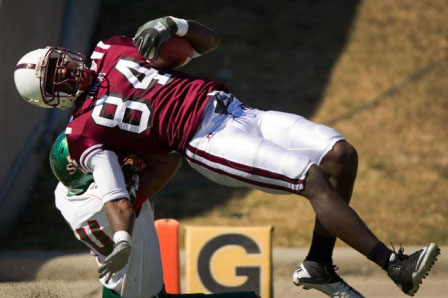 The Bulldogs (6-2, 5-1 SWAC) jumped out to a 17-0 lead in the first half courtesy of two 17-yard touchdown runs by Terrance Pride and Kaderius Lacy.

Bobby Wenzig made two field goals for the Hornets to cut the deficit to 17-6 at halftime.

However, the Bulldogs’ Chartavious Keith blocked the Wenzig PAT to preserve the win.

Dominguez passed for 206 yards and rushed for 82 yards with two touchdowns for Alabama State (6-2, 6-1 SWAC), who still maintain a one-half game lead over the Bulldogs in the SWAC East.

The Magic City Classic has been played uninterrupted since 1924 with Alabama A&M leading the series 38-33-3 and has now won six of the last seven Classic games dating back to 2005.

Casey Therriault was responsible for all six Jackson State touchdowns. His two-yard run, a 41-yard TD pass to Rico Richardson and a seven-yard toss to Renty Rollins gave the Tigers a 24-7 halftime lead.

Therriault continued his Heisman-like performance in the second half.

He connected with Richardson a second time for another touchdown pass, then ran in a one-yarder to give Jackson State a commanding 38-7 lead entering the final quarter.

His final score came on another one-yard touchdown run, increasing the lead to 44-7 midway through the fourth quarter.

Courtney Brown scored the only second-half touchdown for the Panthers on a three-yard run.

Jackson State outgained Prairie View A&M 722-263 including a whopping 315 yards on the ground.

The Shreveport Classic is annual game played during the Louisiana State Fair similar to the State Fair Classic game which is played in nearby Dallas.

Following a Texas Southern safety, the Delta Devils scored on a five play, 36-yard drive, capped by a 12-yard TD pass by Garrick Jones to give MVSU a 9-2 lead at halftime.

Carlos Sanchez added a 25-yard field goal to increase the lead to 12-2 in the third quarter.

The Tigers came within three (12-9) on a six-yard touchdown pass from Riko Smalls to Joe Anderson with 2:31 to play in the fourth quarter.