Rice to Jones: Top HBCU Wide Receivers of all Time 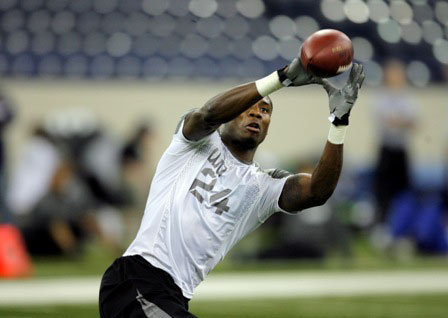 Although they probably never endured the obstacles and hardships that confronted Black quarterbacks, wide receivers from Historically Black Colleges and Universities (HBCUs) could not escape the bigotry that all Black Americans faced during the Civil Rights era.

Although Black athletes starred at White universities during that time period, many schools had unwritten quotas that only allowed a limited amount of Black talent to represent their universities until after the Civil Rights Movement.

As a result, regardless of position, many of the best athletes had to take their talents down south and star for schools that did not receive the same publicity as schools like Notre Dame and Syracuse.

Although people have always doubted the talent that came from the SWAC, SIAC and the MEAC, you cannot argue that the greatest receiver of all time, Jerry Rice, is a proud graduate of an HBCU (Mississippi Valley State).

What many may have forgotten is that although Rice was the G.O.A.T., there were others that gave him a run for his money statistics-wise.

Since many of them did not get the limelight that they deserved when they were on campus, RegalMag.com will give the five best HBCU wide receivers the praise that is long overdue.

1)    Jerry Rice (Mississippi Valley State)—It’s surprising that more aspiring wide receivers do not hone their craft by catching bricks because that’s what Rice did to develop his hands, working with his father during some blistering hot Mississippi summer days.  Rice started his career with the Delta Devils with ordinary numbers his freshman year (30 receptions for 428 yards and 2 touchdowns) according to TotalFootballStats.com.  However, by his senior year the numbers that he put up with quarterback Willie Totten were beyond extraordinary.  In 11 games, Rice caught 103 passes for 1682 yards and 27 touchdowns.  He averaged a mind-blowing 152.9 yards per game according to TotalFootballStats.com.  After a record-breaking career in the Mississippi Delta, Rice took his talents to the Bay Area becoming the 16th overall pick by the San Francisco 49ers in the 1985 NFL Draft.  The rest, as they say, is history.

2)    John Stallworth (Alabama A&M)—Having Terry Bradshaw as your quarterback in the NFL would definitely make any receiver shine, but Stallworth was a shining star even during his days at Alabama A&M.  According to AAMUSports.com,  “Stallworth set numerous receiving marks at Alabama A&M in 1972 and 1973.  At A&M he caught 103 passes, including 48 as a senior for 925 yards and was a two-time All-Southern Intercollegiate Athletic Conference pick.”  After playing in the 1973 Senior Bowl, Stallworth was selected in the fourth round of the draft by the Pittsburgh Steelers.  He went on to win four Super Bowls with the Steelers in a pro career that landed him in the Pro Football Hall of Fame in 2002.

3)    Charlie Joiner (Grambling State)—Even if you are not a fan of Grambling football, you cannot hate on the talent that the late, great Eddie Robinson churned out during his record-breaking tenure in north Louisiana.  His quarterbacks made history in the NFL, but the list of wide receivers that he produced was not so shabby either.  At the top of that list has to be the great Charlie Joiner.  Former 49ers coach Bill Walsh said, “(Joiner was) the most intelligent, the smartest, the most calculating receiver the game has ever known.”  However, if it was totally left to the Houston Oilers in 1969, he would have never played wide receiver, only defensive back and kick returner, a transition typical for HBCU signal callers not receivers.  At Grambling, Joiner was one of James Harris’ favorite targets, catching 78 passes over his career, while being selected to the All-SWAC team as a senior according to LASportsHall.com.

4)    Jacoby Jones (Lane)—Everyone loves a Hollywood ending and Jacoby Jones’ 2-touchdown Super Bowl XLVII performance in his hometown New Orleans is stuff that legends are made of.  However, football was an afterthought for most of Jones’ amateur career, which makes his statistics at Lane College that much more unbelievable.  Jones was an All-Parrish sprinter at Marion Abramson High School in New Orleans and initially attended Southeastern Louisiana University on a track scholarship in 2002, before transferring to Lane College.  Even at Lane, Jones continued to split time between track, football and basketball.  However, in 2006 he devoted his entire athletic career to football and it showed.  According to CBSSports.com, “He was the SIAC MVP and Offensive Player of the Year in 2006, leading the league with 68 catches for 822 yards (12.1 average) and six touchdowns.  He also put in work as a returner, running back as well as on defense.  He finished his collegiate career with a Lane College record 5,380 all-purpose yards.

5)    Harold Carmichael (Southern)—Despite not getting much national attention playing wide receiver at Southern, Harold Carmichael had one distinct advantage over his opponents in college and the pros, his height.  At 6-8, 225 pounds Carmichael spent time at receiver and tight end during his 14 year pro career.  According to Jacksonville.com, “(Carmichael) went to Southern as a walk-on, earning a starting job midway through his freshman year.  (He) finished with 89 career catches for 1,601 yards and 16 touchdowns.  (He also) helped Southern to a 9-2 record in ’69, catching a 79-yard TD pass in win over Grambling.”