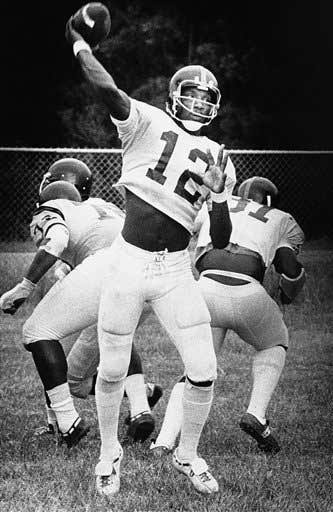 A time existed in college football when the exploits of a Jameis Winston or a Robert Griffin III would have revolved around myth because of a lack of exposure.

Many legendary quarterbacks from Historically Black Colleges and Universities (HBCUs) never got the chance to showcase their skills on the biggest stage.

However, their exploits paved the way for the likes of Michael Vick and Cam Newton, breaking down barriers, stereotypes and bigotry, which has allowed Black quarterbacks to be judged by their merits on the field, not by the close-minded mentality of bigots.

With the 2014 college football season around the corner, RegalMag.com honors its top five HBCU quarterbacks of all time.  They were trailblazers and trendsetters and the current generation of Black quarterbacks owe a debt of gratitude to these unsung heroes.

·        Steve McNair (Alcorn State)—No disrespect to the legends that came before him, but Steve “Air” McNair has to top any list of the best HBCU quarterbacks of all time.  History may remember Doug Williams and James Harris with more reverence because of the barriers they broke, but McNair was nothing short of miraculous during his tenure with the Braves in the early 1990s.  According to ESPN.com, Larry Blackney who coached Bo Jackson at Auburn said that McNair was the best football player he had ever seen when he coached against him at Troy State.  His 1994 season ranks as one of the best seasons ever for a college player.  He accumulated 4,863 passing yards and 936 rushing yards for a NCAA record of 5,799 total yards.  His quarterback rating was 155.4 with 44 total touchdowns.  He finished third in the Heisman voting that year before being drafted by the Houston Oilers.  In the NFL, he became known as one of the toughest QBs ever, leading the Tennessee Titans to an appearance in a Super Bowl.  He also shared a NFL MVP with the great Peyton Manning in 2003.

·        Doug Williams (Grambling State)—Until Russell Wilson and the Seattle Seahawks routed the Denver Broncos in this year’s Super Bowl, Doug Williams was the only starting Black quarterback to lead his team to a Super Bowl win.  His 1977 season with the Tigers was legendary.  He took his collegiate exploits as far as Tokyo, which was monumental for a HBCU program.  Williams also finished fourth in the Heisman Trophy race that year.  According to Sports-Reference.com, he passed for 3,286 yards that season, completing 181 passes on 352 attempts for 38 touchdowns.  His QB rating for the 1977 season was 155.2.  Williams was drafted in the first round by the Tampa Bay Buccaneers in the 1978 NFL Draft before spending time with the USFL’s Oklahoma/Arizona Outlaws.  He won Super Bowl XXII MVP as a member of the Washington Redskins.

·        Willie Totten (Mississippi Valley State University)—Few college fans may remember the name Willie Totten unless they are true SWAC (Southwestern Athletic Conference) football fans, but the man throwing touchdown passes to the legendary Jerry Rice in college was named Willie “Satellite” Totten.  According to CSTV.com, the Delta Devils averaged more than 59 points a game during the Rice-Totten era.  At the end of his collegiate career, he owned 50 Division I-AA passing records.  In 1984, Totten and Rice hooked up for 1,845 yards with 28 touchdowns in 11 games.

·        Eldridge Dickey (Tennessee State)—In 1968, Tennessee State’s Eldridge Dickey held the distinction of becoming the first Black quarterback drafted by the AFL or NFL.  But unfortunately for him the Oakland Raiders and pro football as a whole were not quite ready for him to be the signal caller for a team.  Rumor has it that he outplayed Ken Stabler, a second round pick that same year from Alabama, during training camp but was forced to switch to wide receiver.  According to TSUTigers.com, “While at TSU, Dickey set multiple records including the most passes attempted and most passes completed with 805 and 430, respectively…As a sophomore in 1965, Dickey led the Tigers to their fifth Black College National Championship and a perfect 9-0 regular season record…A year later, Dickey enjoyed his finest season—throwing for 1,812 yards and 25 touchdowns.”

·        James Harris (Grambling State)—The legendary James Harris holds the distinction of being the first full-time Black starting quarterback in NFL history.  While in high school in Monroe, La. he contemplated asking his coach to switch him from quarterback to defensive back because he thought it would give him a better chance at getting a football scholarship and making it to the pros, according to the New York Times.  However, when he watched Martin Luther King, Jr.’s “I Have a Dream” speech, he realized he had a chance to play quarterback professionally because he knew all of God’s children were created equal.  That realization was to Grambling’s benefit.  Coach Eddie Robinson was so determined to produce a NFL quarterback, after receiving criticism from Howard Cosell, that he would not allow Harris to run the 40-yard dash because he was afraid that his 4.6 speed would convince pro coaches that he could play another position.  The result was Harris also becoming the first Black Pro Bowl quarterback in 1974.