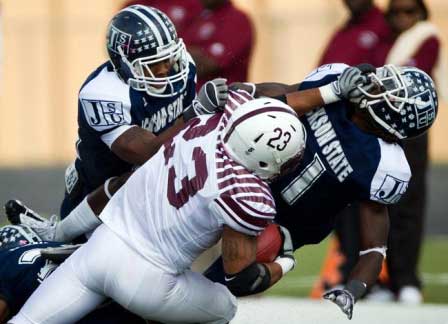 Both teams played a stalemate in the first quarter with either side unable to break the scoreless tie.

JSU (4-1, 3-1 SWAC) blew the game open in the second quarter with 34 consecutive points via the special teams woes and anemic offense of Texas Southern. Jackson State only had the ball for five minutes in the quarter.

Texas Southern (2-2, 1-2) finally showed signs of life with Martin Gilbert’s 42 yard touchdown run to cut the deficit to 34-7. JSU added a field goal as time expired to lead 37-7 at halftime.

TSU’s only score of the second half was another touchdown run by Gilbert to trail JSU 37-13. Jackson State finally put the game away late in the third and the fourth quarter with 21 consecutive points to secure the 45 point victory.

Casey Therriault ended the day going for 15 of 27 for 300 yards, three passing touchdowns and one rushing touchdown. He rebounded five days after a dismal six interception performance in a home loss versus Alabama State.

Jackson State, one of Black college football’s most storied programs, is ineligible to play in the 2011 SWAC Championship Game due to NCAA academic violations.

Gilbert rushed for 140 yards on 23 carries and two touchdowns for Texas Southern.

TSU’s contention for a legit title defense is in jeopardy following the loss and look to rebound in a rematch of the 2010 SWAC title game versus undefeated Alabama State Saturday in Houston.

Prairie View’s Johnathan Troast led the Panthers to a 31-23 victory over Grambling State Saturday in a Black college football showdown in Dallas at the Cotton Bowl.

Points were at a premium in the first half as both teams struggled to generate a substantial amount of offense. They each settled for field goals as the half came to a close with a 3-3 tie.

Grambling broke the tie in the third quarter with a 74 yard touchdown run by running back Dawrence Roberts to take a 10-3 lead. PV answered late in the quarter via a 32 yard touchdown pass from Troast to receiver Greg Thurmond.

GSU scored a touchdown late in the fourth quarter to cut the Panthers lead to 31-23 with over two minutes left but PV ran out the clock with its final possession to secure the eight point victory.

Troast finished the day with 21 completions on 27 attempts for 312 yards and four touchdowns. He replaced starting QB Jerry Lovelocke, who went down in the first half with an injury.

Prairie View moves into sole possession in the SWAC Western Division coupled with a loss of previously unbeaten Arkansas-Pine Bluff. Grambling State falls to last place in the standings at 1-3.

Roberts rushed for 175 yards on 27 carries and one touchdown for the Tigers.

The State Fair Classic, between Black college football teams, has been played since 1925 with Wiley and Langston playing in the inaugural game that ended in a 0-0 tie. The game was played on what was referred to as “Negro Day” at the Fair. Prairie View and Grambling began playing each other in the mid-80s before PV’s football program was disbanded in 1990.

The Tigers and the Panthers have recently played one another in this Black college football Classic since 1992.

Bethune-Cookman No Match for Miami (FL)

Bethune-Cookman lost to Miami (FL) 45-14 Saturday at SunLife Stadium. This was the first meeting between the two schools and first major college opponent for the Wildcats in its 86 year history.

The Wildcats took an early 7-0 lead when Jackie Wilson connected with Eddie Poole for a one yard touchdown pass. The quick score had the Hurricane fans in a state of shock and discernment.

The Hurricanes then scored 21 unanswered points in the final quarter to secure the victory and assuredly calmed the nerves of the Miami faithful in practically an empty stadium.

Jackie Wilson went 21 of 31 for 180 yards and a touchdown for the Wildcats.