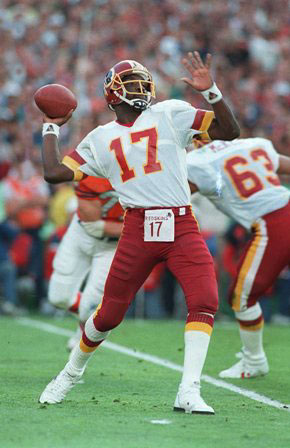 When it comes to black quarterbacks, Doug Williams was not the first and he was not the best. But in many ways he is as important a figure in the evolution of pro football quarterbacking as Jackie Robinson was in paving the way for Blacks in Major League Baseball.

What Williams did was win, and win big, as quarterback for the Washington Redskins. Williams was MVP of Super Bowl XXII in 1988, beating John Elway and the Denver Broncos 42-10. Of the many Black quarterbacks, he remains the only one to win a Super Bowl as the starter at that position

Williams’ route to that momentous event was circuitous. He was a first round draft pick of the Tampa Bay Buccaneers in 1978 after a stellar career at Grambling State. Before Williams’s arrival, the Bucs had never appeared in the playoffs. With Williams, Tampa made three playoff appearances in four years, including a loss to the Los Angeles Rams in the 1979 NFC title game.

Before the success Williams enjoyed, it was common for NFL teams to draft Black quarterbacks and switch them to wide receiver, defensive back, or some other position. All Pro wide receiver Marlin Briscoe, for example, started at quarterback during his rookie season with Denver in 1968, the first starting black quarterback in NFL history, after a successful college career behind center.

By the next season, though, Briscoe had been moved to wide receiver, and according to Answers.com, it took nearly 20 years after Briscoe’s historic first for talented Black quarterbacks to regularly hold this integral team position. Briscoe himself never did so again.

Even Williams’s early success went unrewarded in Tampa. At $120,000 per year, he was the lowest-paid starting quarterback in the NFL. After the 1982 season, Williams asked for a $600,000 contract. Bucs owner Hugh Culverhouse refused to budge from his initial offer of $400,000 despite protests from coach John McKay. While Culverhouse’s offer was still more than triple Williams’ previous salary, he would have still been among the lowest-paid starters in the league.

Feeling that Culverhouse was not paying him what a starter should earn, according to his website, Williams bolted to the upstart United States Football League (USFL). The next year the Bucs went 2-14, and they would not make the playoffs again for 14 years.

Three years later the USFL folded and Williams returned to the NFL as a backup with the Redskins. He stepped in three times when starting quarterback Jay Schroeder was injured and led Washington to wins in relief before finally becoming the starter during the team’s championship playoff run.  His career ebbed after that Super Bowl, as injuries robbed him of his effectiveness and he eventually lost his starting position to Mark Rypien.

The persistence and integrity that Williams showed during his playing career paid off with a substantial run as a coach and administrator in professional and college football. He started as an assistant coach with the Naval Academy and then the Scottish Claymores of the World League of American Football. After a year of scouting college players for the Jacksonville Jaguars, Williams spent seven years as a head coach with Morehouse College and Grambling State University.

Eventually, he returned to Tampa Bay as a personnel executive and eventually became Director of Pro Scouting. He currently serves as General Manager of Norfolk in the fledging United Football League (UFL). The team will begin play in the 2011 UFL season.

UFL Commissioner Michael Huyghue is pleased to have Williams onboard with the new franchise. “I think I was one of the first people in the NFL back in 1995 to hire Doug in Jacksonville. And I think he has been overlooked at times when NFL executive jobs have opened. He is a great example of a great player who after his playing career continued to embody talent, character and stayed current in football. Players feed off of him. If you can get Doug Williams, in any franchise, your franchise will be better.”

Over the past 30-plus years Williams has seen Black quarterbacks rise from marginalized and exploited athletes considered unworthy of leadership roles to Black players of all positions candidates for key executive positions at the highest levels of the game. He has been a catalyst for Black quarterbacks and an unsung Black leader.