Will a Floyd Mayweather, Jr. vs. Manny Pacquiao Bout Save Boxing 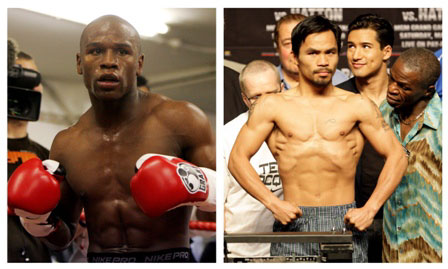 A lack of star power in boxing has some fans still craving for a Floyd Mayweather, Jr. vs. Manny Pacquiao fight (AP Photos/Alastair Grant and Rick Bowmer, File).

Can a Floyd Mayweather, Jr. vs. Manny Pacquiao Bout Save Boxing?

Judging from the results and the fan reaction of the May 7 welterweight fight between champion Manny Pacquiao and Shane Mosley in Las Vegas, a much anticipated Floyd Mayweather, Jr. vs. Manny Pacquiao matchup may not be the “Fight of the Century” that everyone is hoping for or even want to see.

That is if it ever happens.

Pacquiao, who defeated Mosley in a ho-hum unanimous 12-round decision, left many boxing fans across the country scratching their heads and wondering was this it? This was the “Fight of the Year” that was being hyped by boxing promoters? Fans say that this is one of the main reasons why they are losing interest in the sport in droves and are drawn to the more attractive and more aggressive mixed martial arts (MMA).

“I did watch the Manny Pacquiao/Shane Mosley fight;” said Jimmy Idica, 36, a line cook at the Sailfish Country Club in Hutchinson, Fla. “Mosley looked alright in the first two rounds until he got dropped in the third. After that you could see that Manny’s power surprised him a bit and he went into retreat mode. Mosley even said in the post fight interview that Manny’s power surprised him. He even said Manny hit him the hardest in all of his fights. Coming from Mosley, that’s impressive.”
MMA has grown immensely in the past 15 years and some fights have even outdrawn boxing, which used to own the pay-per-view arena. Could it be that boxing is starting to lose some of its swagger to this upstart sport?

“I think so,” said David Anderson, 27, a car salesman from Chicago. “I remember watching with my dad guys like [Mike] Tyson and [Evander] Holyfield and [Lennox] Lewis. Every now and then I’ll catch some of Muhammad Ali’s and Sugar Ray Leonard’s classic fights on cable. All those guys were great fighters and had something else about them that made you want to watch them, but that isn’t the case today.

Fans also feel that there are other factors contributing to MMA’s booming popularity over boxing.

“It’s like watching street fighting,” said Alex Johnson, 25, a student from Modesto, Calif. “It’s very raw and really energetic. It has everything thing that boxing doesn’t have these days. MMA hasn’t been corrupted by shameless promoters, yet, and the intensity is like nothing I’ve ever seen. I like boxing and would watch a [Floyd Mayweather, Jr. vs. Manny Pacquiao] fight… but it’s taking them so long to come together and set a time for it, that I’m not holding my breath.”

So where does that leave boxing? Would a Floyd Mayweather, Jr. vs. Manny Pacquiao fight save the day and the sport? Maybe for a short time, but the longer the two linger on and delay for whatever reasons each has for not facing each other, the inevitable is going to happen as father time catches up to both fighters making it look less and less desirable.

“As for the super fight between Manny and Floyd Mayweather, I don’t know,” said Idica. “It would bring a lot of publicity and attention back to boxing, but after that who else in boxing is worth watching? Manny and his promoters had some faults as to why the fight fell through the first time. And Floyd is just being Floyd, and we all know that. But now that everything is in place, Floyd retires? Really!”

A Floyd Mayweather, Jr. vs. Manny Pacquiao fight is attractive, but it’s no Ali vs. Frazier or Tyson vs. Holyfield to say the least. Should these two finally hook up and give the fans what they want, it’s still hard to say how much of an impact it will have on the overall sport of boxing and if it will bring back the fans that have left for MMA along with some new ones.