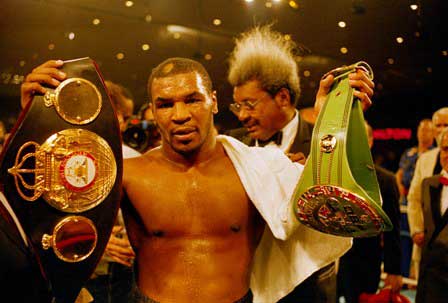 It’s been a long time since the heavyweight division has had a charismatic champ like Mike Tyson (Jeff Robbins/AP Photo).

The heavyweight boxing division was dominated by fighters of African descent for nearly 70 years. From Joe Louis in the late 1930s to Lenox Lewis in the early part of this century, there was an almost uninterrupted string of Black heavyweight titlists, most of them Americans.

The list of Black champions is an honor roll of American sports heroes. Louis, Ezzard Charles, “Jersey” Joe Walcott, Floyd Patterson, Sonny Liston, Muhammad Ali, Joe Frazier, George Foreman, Larry Holmes, Mike Tyson and Lewis were some of the biggest celebrities of their day. Only the run of Rocky Marciano in the early to mid 1950s and one-punch wonder Ingemar Johansson interrupted that string.

Today is a different story. WBA Champion David Haye is British, and WBC Champion Vitali Klitschko is Ukrainian. The last African American Heavyweight Champion was Shannon Briggs, who ruled the WBO for part of 2006 and 2007. One almost has to go back to Evander Holyfield to find an American Black heavyweight champion with the stature of a Foreman, Frazier or Holmes.

That situation doesn’t show any sign of immediate change. Odlanier Solis might be the current great “Black hope” ready to ascend to the crown, but he is Cuban. Solis is one of the most titled and successful amateur boxers of recent vintage. Olympic Heavyweight Boxing Champion in Athens 2004, Solis turned professional in 2005 with a final amateur record of 227-14. Some though, have questioned his conditioning. He won the Olympic title at 204 pounds, but some reports indicate that his weight has since ballooned to 270 pounds.

David Tua is another rising heavyweight of color. Tua has a crushing left hook and is deceptively quick. His biggest wins have been spectacular and often over in a flash. He holds knockout wins over John Ruiz (Haye’s mandatory challenger), David Izon, Michael Moorer and Hasim Rahman, all former world titleholders. However, he can be out-boxed (as Lennox Lewis showed in 2000) and made to look somewhat plodding and pedestrian. Tua is Samoan.

One has to go all the way down to the eighth-ranked contender to find an American, Eddie Chambers. Chambers is 35-2, stands 6-1 and weighs 220 pounds. On March 20, 2010 he faced Wladimir Klitschko, Vitali’s brother, for his first ever title shot in Düsseldorf, Germany. Klitschko defeated Chambers by knockout five seconds before the end of the final round. Both fighters were criticized for passivity and Wladimir has since been dethroned while Chambers has fallen in the rankings.