Muhammad Ali Was Greatest Even to Friends of Adversaries 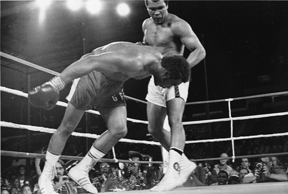 In this Oct. 30, 1974 file photo, challenger Muhammad Ali watches as defending world champion George Foreman goes down to the canvas in the eighth round of their WBA/WBC championship match in Kinshasa, Zaire (Photo Credit: AP Photo/File).

He Must Have Been the Greatest

It is sad that when it comes to the most talkative icon in the world dying, I am speechless.

Muhammad Ali tributes have come pouring in since his death a week ago today, and after awhile they become extremely redundant.

We have heard his famous quotes constantly.

We have seen the re-airing of his classic fights.

And we have heard everyone else’s stories of how he impacted their life.

And it says something special about an athlete when I can have a personal relationship with his opponents and still look at him as my favorite athlete of all time.

While I do not remember Ali’s last fights in the early 1980s, on the day I was born Muhammad Ali reigned as the heavyweight champion of the world.

Nevertheless, I did not grow up in a household with constant stories of Ali.

I grew up in a home with constant stories of George Foreman.

On his way to becoming heavyweight champion of the world by destroying the late, great Joe Frazier, Foreman purchased a house in Houston’s Scenic Woods neighborhood for his mother.

Although Foreman became a legend on the streets of Fifth Ward in Houston, Scenic Woods became his de facto stomping grounds.

He would train in Scenic Woods, running everyday as a part of his conditioning.

During this training he became friends with a young cat fresh out of Southern University, my father.

Although Foreman’s conditioning was probably on another level than my father’s, my dad would train with him nonetheless.

My mother still tells the story about how she would stand in the doorway pregnant with my sister as George jogged in place, and shout, “Honey, George is out there.”

She would go on to say that my father sometimes did not look too happy because George probably exercised him into the ground.

But how do you turn down the future heavyweight champion of the world when they want to hang with you?

Furthermore, how do you later say no to the man that pushed Frazier around like a ragdoll to become the heavyweight champion and become the most feared man on the planet?

My older cousins, aunts and uncles still talk about getting autographs from the new heavyweight champion of the world when they would come to visit my parents and sister.

I became an adjunct journalism professor at Texas Southern University and one of my former students just so happened to be named George “G4” Foreman IV.

However, despite having many George Foreman grills at my house and being connected to the Foreman family, Ali was still my hero.

When I wore an Ali t-shirt with him towering over Sonny Liston in their second fight in Lewiston, Maine, “G4” called me out.

He did not want to have to look at the man that had taken his dad’s heavyweight championship belt for an entire hour.

Despite calling me out, “G4” did it with a smile because he knew that even despite the personal connection, Ali was on another level.

That was because he represented strong Black manhood at a time when society relentlessly tried to emasculate Black men regularly.

He represented resiliency in the ring.  Now, we live in a society when athletes seem to quit in the middle of battle when things do not go their way.

And although he believed in a different religion than me, he gave me strength to be as unapologetically Christian as I wanted to be, regardless of potential consequences.

Whenever I see the Foremans, young and old, they show love and I reciprocate.

They are my friends and are friends to my company, Regal Media Group, LLC.

However, Ali way my hero and while he does not transcend race as some people try to say, his greatness was so great it did transcend friendships and personal connections.

When you know someone personally, and his or her nemesis was still your hero, then that person truly had to be the greatest.