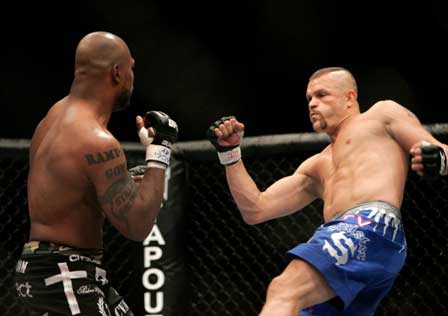 There once was a time when boxing ruled the sports landscape.  The heavyweight champion was the most feared and famous athlete on the planet.  Boxers like Joe Louis, Muhammad Ali, George Foreman and Mike Tyson were household names throughout the world.

However, over the last decade, a sport with history and honor has lost its popularity to upstart sports like mixed martial arts (MMA).  The decline of elite fighters in the heavyweight division and the lack of knockouts have led many young men to look for action and excitement in sports like MMA.

Because of the decline of boxing, mixed martial arts has taken over and has become the sport of choice for the age 18-34 demographic and put the Ultimate Fighting Championship (UFC) on course to join the ranks of elite sports leagues like the National Basketball Association and the National Football League.

“MMA resounds with 18-34 (year olds) because that age range has a shorter attention span than other age groups.  They buy video games, fast cars, cool clothes, all on credit because they want it now.  They want instant gratification.  In the UFC, the normal bout consists of three five-minute rounds,” said long-time fan Giam Sigaud, 35, of Houston.

According to UFC.com, MMA is an intense and evolving combat sport in which competitors use interdisciplinary forms of fighting that include jiu-jitsu, judo, karate, boxing, kickboxing, wrestling and other techniques to their strategic and tactical advantage in a supervised match.

The Ultimate Fighting Championship began in 1993, but mixed martial arts dates back to the Olympic Games in Athens, according to UFC.com.  “About 80 years ago, a Brazilian form of MMA known as Vale Tudo (anything goes) sparked local interest in the sport.”

Now that interest is felt throughout the world as the UFC now offers 12 to 14 live pay-per-view events annually through cable and satellite providers.  Recently, a UFC event in Columbus, Ohio attracted more than 19,000 people—the largest audience in North America to witness a mixed martial arts event.

More than 4.7 million viewers tuned in to see UFC 75, the first ever title bout on Spike TV.  On a Saturday night, it outdrew college football among young men.

Viewers of UFC 75 saw Quinton “Rampage” Jackson defeat Dan Henderson to unify the UFC and PRIDE titles in the 205-lb weight-class.  Cheick Kong defeated Mirko Cro Cop and Houston Alexander knocked out Alessio Sakara in one minute of the first round.

In the title fight, Jackson became the first man to unify a major title with a five-round victory.  Judges scored the bout 48-47 and 49-46 twice for Memphis, Tenn. native.

Fans attribute the success of the UFC to clever marketing such as the reality show “The Ultimate Fighter,” because fans can become acquainted with the athletes and begin to follow their careers.

The million-dollar question is why are violent sports so popular among young men?

To many fans, mixed martial arts have already surpassed boxing in popularity, and some feel it will not be long before it is on par with mainstays like football, baseball and basketball.

The steroids scandal in Major League Baseball, along with the NFL’s image crisis and the NBA gambling scandal are many reasons why sports fans are turning to alternative sports like MMA.  Questionable decisions and a lack of star quality have led to the UFC regularly outperforming boxing in its pay-per-view intake.

With such quick success, it seems as if the UFC will soon revival the three big sports leagues in popularity and profit.

And for those who have not yet caught the MMA bug, Sigaud asks “them to watch the reality show from the beginning.  The UFC packages the fights amidst bad blood while living with each other and training with each other.  Also going online and watching some of the signature fights helps.  I would (also) ask them to … watch a pay-per-view event or a free night on Spike TV.”

After watching one fight, the UFC is certain that it will not be the last.