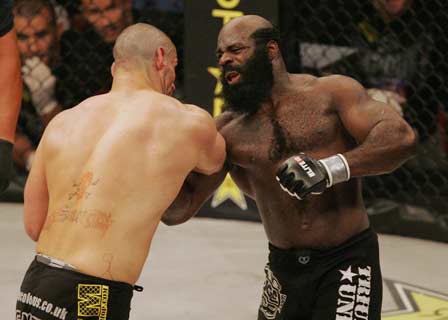 Americans are suckers for Horatio Alger stories. In a typical Alger tale a young boy, often an immigrant, grows up on the mean streets and overcomes seemingly insurmountable obstacles to grab his slice of the American Dream.

Even Alger could not imagine the obstacles faced by Kimbo Slice as he rose from birth to a disadvantaged family in the Bahamas, to a severely underprivileged childhood in Miami where he honed his street-fighting skills, to ultimately become one of America’s most feared and rewarded Ultimate Fighters with a key role on the Spike TV program dedicated ultimately to the Ultimate Fighting Championships tour.

Americans are lapping up the Kimbo Slice tale. They love his prison record, the failed NFL tryout, his famous underground street brawls, his role as a single parent to six children, his reckless and brutal fighting style, and the lifestyle he has carved out for himself. They even love the controversy around his most famous mixed martial arts (MMA) fight in May of 2008 against James Thompson.

Slice, then 34, had a rough start in the match, losing the first two rounds to Thompson on total points as Thompson consistently put Slice on the mat. However, in the first few seconds of the third round Slice decimated Thompson’s left ear, rupturing his foe’s wrestling induced cauliflower which gave way to three viciously unanswered punches that prompted the referee to discontinue the fight in what many viewed as a controversial stoppage since Thompson was still standing. Fellow MMA veterans Brett Rogers and Frank Mir were particularly critical of Slice’s victory, insisting that the performance was “garbage” and that “every time Kimbo Slice fights, it sets MMA back.”

The controversy, along with a surprising loss to last minute fill in Seth Petruzelli about a year ago, just enhanced “The Legend of Kimbo Slice.” Spike TV aggressively promotes his training and his bouts and gives him a lion’s share of the air time in its Ultimate Fighters series. In the network’s promotional material for the fight they said, “Now, as part of The Ultimate Fighter, Heavyweights, he’s probably gotten more attention than ever before but in a very different way. He’s no longer being cast as The Untouchable. He isn’t being cast as anything, in fact. He’s just been given a stage and the onus is on him to show us what kind of fighter Kimbo Slice is.”

The September 30 episode centered on Slice, all 6-2, 235 pounds of him, as he prepared for his heavyweight match for Team Rampage. At stake for Slice in the series is a spot on the Ultimate Fighting Championships competitive tour. Viewers watched Slice train, learn, and ultimately face off against Roy Nelson, representing Team Rashad. His work ethic and competitive nature were positively reviewed, but some experts also believed Nelson possessed superior skills and at 264 pounds might be tough for Slice to move. Certainly, the run up to the fight featured Slice much more so than Nelson.

During the first round Nelson dominated the last 90 seconds and got several solid blows in to Slice’s head while on top of him as Slice barely moved. In the second round Nelson scored an earlier takedown, he began punching a defenseless Slice while he was on the mat, and the fight was stopped. Slice admitted that he was a comparative rookie in Ultimate Fighting, and that he would learn from this loss. Interestingly, the post fight discussions and promotions for the next week’s show centered on Slice, who as the ultimate street fighter came up short under organized Ultimate Fighting Championship Rules. Results be damned, Kimbo Slice is the star of the Spike reality show on Ultimate Fighting.