If Ali Was G.O.A.T., Who Were Next Best Heavyweight Boxing Champs? 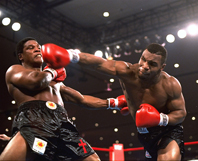 Mike Tyson, right, delivers a powerful blow to Trevor Berbick in the second round of their 1986 fight in Las Vegas.  Tyson became the youngest heavyweight champ later that night with a TKO of Berbick (Photo Credit: AP Photo/Douglas C. Pizac).

The passing of the greatest boxer of all time Muhammad Ali had many reminiscing on the glory days of the heavyweight boxing division.

The 1970s saw the greatest rivalries with Ali battling the likes of Joe Frazier, George Foreman and Ken Norton.

The 1980s saw the domination inflicted on opponents by Mike Tyson.

And the 1990s and 2000s boasted some great rivalries as well with fighters like Tyson, Evander Holyfield, Riddick Bowe and Lennox Lewis.

RegalMag.com jumps into the historical ring to rank the greatest fighters ever in the heavyweight boxing division.

The list ranks the fighters from number 10 to number one.

Co-sign the list if it is a knockout, or call the magazine out if the decision is ridiculous and one thinks the fix is in.

Jack Johnson—The flamboyant champ from Galveston, Texas reigned as heavyweight boxing champ from 1908-1915.  He was known just as much for trash talking and flaunting his White girlfriends as his boxing prowess.  After defeating White challengers, Black fans were often lynched as retribution.

Larry Holmes—Holmes is often overlooked as a great heavyweight because his reign came after Muhammad Ali’s and before Mike Tyson’s.  Ali’s former sparring partner fought from 1973-2002 reigning as WBC champion from 1978-1983 and winning the IBF belt in 1983.

Rocky Marciano—Some claim Marciano’s era was a low point for talent in the heavyweight boxing division, but an undefeated record is an undefeated record.  Marciano fought from 1947-1955 and was champion from 1952-1955 with an overall 49-0 career record with 43 knockouts.

George Foreman—George Foreman’s transformation to a born-again Christian and master salesperson sometimes makes people forget how feared he was in the ring.  Although critics say he wasn’t the best “boxer” ever, he was arguably the best puncher.  He knocked Frazier down six times in two rounds to win the championship in January 1973 and won it again by knocking out Michael Moorer in 1994, becoming the oldest heavyweight champ in history.

Mike Tyson—The 1980s belonged to Mike Tyson, hands down.  He was the most feared fighter in the world in the same mold as Foreman and Sonny Liston decades before.  His knockouts were some of the fastest ever.  The only thing that stood in his way of being in the top two of all-time was his own demons outside of the ring.  In 1986, Tyson became the youngest heavyweight champion when he defeated Trevor Berbick at 20 years old.

Evander Holyfield—Some critics say that Evander Holyfield was a manufactured heavyweight who did not have the size and power to be great.  But he had Muhammad Ali’s courage and mustard-seed faith.  That combination made him one of the best ever.  He finally got his respect when he defeated Tyson twice, eventually becoming the only four-time champion in history.

Joe Louis—Besides Ali, no heavyweight boxing champ was as important to his community and country as Joe Louis.  The “Brown Bomber” rose from poverty to the heavyweight crown, beginning his career in 1934 with 27 straight wins (24 KO’s).  However, German Max Schmeling upset him in 1936 when he was counted out in the 12th round.  When he won the heavyweight championship over James J. Braddock he refused to be called the champ until he avenged his loss against Schmeling.  His defeat of Schmeling in their second fight was a metaphorical victory for America over Adolf Hitler and Nazi Germany.

Muhammad Ali—From the mid 1960s to the late 1960s, Muhammad Ali seemed unbeatable in the ring.  The only thing that could stop him was the United States government, which stripped him of his title in 1967 when he refused induction into the U.S. military.  That ban made him the endearing figure he would become throughout the world.  He became the voice of anti-Vietnam war activists, Black activists and eventually won the title two more times with wins over Foreman and Leon Spinks.