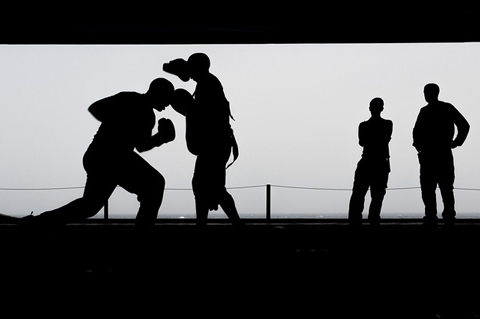 Thanks to several talented fighters, the heavyweight boxing division is in good hands for many years to come.

A Heavyweight Boxing Savior is Near

Don’t you miss the old days of heavyweight boxing when the heavyweight-boxing champ was the most famous man on the planet?

While mixed martial arts have gained momentum because of the exorbitant amounts of knockouts, boxing has taken a backseat in pop culture importance.

Sure we have lighter weights like Floyd Mayweather, but boxing is at its best when heavyweights rule the world.

Despite a couple of down decades, heavyweight-boxing fans have no fear because help is very near.

With Anthony Joshua’s knockout victory over former heavyweight champion Vitali Klitschko, many heavyweight-boxing fans in America and beyond were introduced to the charismatic, powerful, talented and undefeated Joshua.

But the London native Joshua is not alone.

The heavyweight boxing division has four talented pugilists to keep an eye on in the coming years.

Anthony Joshua—The current IBF heavyweight champion, Joshua began his dominance on the amateur level winning the silver medal at the 2011 World Amateur Championship in the super heavyweight division.  Joshua backed that up the next year with a super heavyweight gold medal in the 2012 Summer Olympics.  He became IBF champ by defeating Charles Mastin in 2016.  In 2017, he earned the WBA and IBO belts as well.  His current record is 19-0 with 19 knockouts.

Deontay Wilder—The Tuscaloosa, Ala. native has held the WBC heavyweight title since 2015.  The 31-year-old owns a record of 38-0 with 37 knockouts.  Known as “The Bronze Bomber,” Wilder wants to desperately get Joshua in the ring to show the English boxer how the Americans handle their business in the ring.  Wilder has a bronze medal from the 2008 Olympics.  He dropped out of college and turned to boxing in 2005 to help support his daughter born with spina bifida.

Tyson Fury—A 6’9 boxer with a reach of 85 inches should be illegal.  Unfortunately for the competition, Tyson Fury’s furious beat downs are very legal and much appreciated by boxing fans worldwide.  The former WBA, IBF, WBO and IBO champion was actually named after former champ Mike Tyson.  With his punching power the name is very appropriate.  He also made news in the past by stating that he would like to get former United States President Barack Obama in the ring.  The “Gypsy King” has an overall record of 25-0 with 18 knockouts.  The European pugilist had to vacate the titles for not granting fights to mandatory challengers and cancellations due to personal and health matters.

Joseph Parker—The New Zealand native has held the WBO heavyweight belt since 2016.  Parker has an Olympic pedigree as well, participating in the Olympics alongside Anthony Joshua in 2012.  Parker defends his WBO title against Romanian fighter Razvan Cojano this Saturday but some boxing experts do not think he would stand a chance with people like WBC champ Deontay Wilder.  In 22 total fights, Parker has 22 wins, zero losses and 18 knockouts.