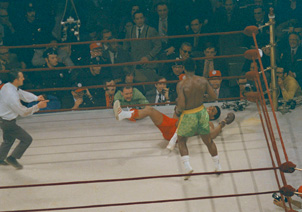 Let’s Get Ready to Rumble

With the Floyd Mayweather-Manny Pacquiao bout scheduled for May 2, boxing has once again returned to the forefront of American society.

Before the religion known as football and the popularity of baseball, boxing represented America’s original pastime.

In honor of the Pacquiao and Mayweather fight, which some have dubbed good versus evil; RegalMag.com takes a look at the five best boxing matches with social and political implications in history.

Jack Johnson vs. James J. Jeffries (July 4, 1910)—Jack Johnson defied all racial stereotypes during his tenure as a boxer such as the belief that African-American athletes were inferior to their White counterparts.  Johnson flaunted his success with fancy cars and White women, which was very taboo in the Jim Crow days.  According to ibhof.com, after Johnson successfully defended his title five times, boxing pundits began looking for a “Great White Hope” to strip Johnson of his belt.  Jeffries held the title from 1899-1904, retiring without a loss. Although Johnson cautiously fought Jeffries through the majority of the fight, he sprang to life in the seventh round, eventually swelling Jeffries’ right eye shut.  In the 14th round, Johnson knocked Jeffries down three times before his corner threw in the towel.  As a result of Jeffries’ loss, riots erupted throughout the nation, killing several and injuring hundreds according to ibhof.com.

Joe Louis vs. Max Schmeling II (June 22, 1938)—While Johnson was hated for defeating White boxers, some Americans reluctantly embraced Joe Louis as a national hero.  In the 1930s, as Adolph Hitler’s fascist regime was gaining steam, Louis represented American freedom and capitalism while Max Schmeling represented German tyranny and anti-Semitism.  According to ESPN.com, Schmeling had even given the Nazi salute after beating American fighter Steve Hamas.  Before their first bout, Louis let his hubris get the best of him, cutting his workouts short and spending many hours at the golf course.  As a result in their first meeting, “Schmeling gave Joe a severe beating and inflicted the first loss of his pro career, via a 12th-round knockout,” according to ESPN.com.  The rematch at Yankee Stadium ended at just 2:04 of the first round after Louis knocked Schmeling down four times.  Harlem, N.Y. erupted in immediate celebration as African-Americans celebrated their newest hero.

Joe Frazier vs. Muhammad Ali I (March 8, 1971)—“The Fight of the Century” lived up to the hype.  Two undefeated champions fighting for one title.  Ali had been stripped of his title for refusing induction into the military during the Vietnam War.  Frazier won the title in his absence.  Ali represented the disenfranchised African-American community who did not view the war as their fight.  Frazier was loved by the American establishment and branded an Uncle Tom by Ali.  According to ESPN.com, “Frazier landed a left hook in the 15th round that sent Ali careening to the canvas.  The unbeaten Frazier won a unanimous decision as he handed Ali his first defeat of his pro career.”  Ali and Frazier would go on to meet two more times in the ring, including the “Thrilla in Manila,” with Ali winning both bouts.

Muhammad Ali vs. George Foreman (October 30, 1974)—“The Rumble in the Jungle” reached iconic status not only because Ali regained his heavyweight title by upsetting the feared Foreman, but because of its locale.  Promoter Don King had the foresight to stage such a historic fight in Kinshasa, Zaire instead of the usual American cities.  The fight put African culture on center stage in what is now known as the Democratic Republic of the Congo.  “We were first going to call it ‘From Slave Ship to Championship,’” said Lloyd Prince who worked with Don King on the fight.  “I thought that would have been a tremendous idea because of the event itself and what the intent of it was, to take a lot of African-Americans back to Africa who had never been there.”  The fight did that and it also took Ali back to a place he had been, which was on the throne of the heavyweight division.  He implemented his rope-a-dope tactic, allowing Foreman to tire himself out, then knocking him out in the eight round.

Larry Holmes vs. Gerry Cooney (June 11, 1982)—Holmes and Cooney never held any animosity towards each other and definitely no racial hatred towards each other.  However, boxing fans essentially made Cooney the next
“Great White Hope.”  According to ESPN.com, “What irked Holmes was that the Irish-American challenger had purse disparity—a guaranteed $10 million—and he also resented what he saw as Cooney’s relatively easy rise, in comparison to the champion’s own years of struggle.”  The fight was a slugfest.  Cooney went down in the second round.  However, he rallied to land some destructive blows as well.  Holmes proved to be the better boxer, however, winning in the 13th round.  Despite the racial undertones of the fight, Holmes and Cooney became close friends after the fight.