Is Brittney Griner the G.O.A.T.; Could She Compete with Men? 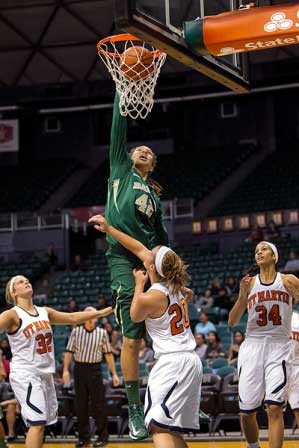 Brittney Griner has evolved from a dunk artist to a complete player (Photo courtesy of espn.go.com).

Brittney Griner has made headlines everywhere as she continues to change the game of basketball for women everywhere.

Known for her infamous dunks and freakishly athletic figure, the 22-year-old senior at Baylor University has provided fans with a type of game we have never seen before.

As her college basketball career winds down, questions of her ability as an athlete come into play. The 6-foot-8 dominating force has had quite the career thus far, separating herself from most female players. There has even been talk of her being considered the best women’s college basketball player of all time.

“When it’s all said and done, her name will be mentioned as arguably the best woman’s college player of all time because she can change the game on both ends of the floor, offensively and defensively,” said 33-year-old Joe Shelton. “At any given moment she can score and also take over. She’s truly a special talent.”

While some may think it’s no question that Brittney Griner holds this title, others believe that it’s too early for such talk.

“She’s definitely in the conversation for one of the greatest college women’s players for her generation,” said 22-year-old Jonathan Blount. “But to say all time would be a stretch when she hasn’t been tested as a pro yet.”

Blount stated that it wouldn’t be until Brittney Griner is tested with tougher competition where athletes are bigger, stronger, smarter and flat out better.

Not only is Brittney Griner being recognized as possibly one of the greatest college women’s players, but also her force on the court has many questioning her ability to even contend against male basketball players.

While she may have the height and skills to compete against any player, the lengths to which basketball is played some believe differs between men and women’s basketball.

“She has the size, length and skill to compete with men, as well as the IQ and toughness,” said Blount. “However, the physical attributes that men have that women don’t, would be an interesting test for Griner.”

“I believe she can compete against male basketball players for the simple reason she’s 6’8,” said Shelton. “She wouldn’t be able to give great efforts only because men are a lot stronger than women.”

It’s because of Brittney Griner’s game that it’s no question that she will be the number one pick of the Phoenix Mercury in the draft on April 15.

The skills she displayed during her time at Baylor are expected to transfer to the professional level and help her change the dynamic of the game.

As fans stay glued to their televisions screen to see her take over the court, her popularity is projected to make its way into her professional career as well.

“Because of her success in college and eager anticipation for her pro career to begin, I believe she will have no problem being popular,” said Blount. “She’s a very important, if not the most important, woman’s college player of her generation.”

“She’s already an enormous talent. She will change the perception of basketball,” said Shelton.

Over the years, Brittney Griner has outgrown her image as just the girl that can dunk, taking her game to a whole other level. No matter where this rising star may end up, the future of her basketball career looks very promising.