Could Success of Laurel J. Richie, WNBA Lead to Other Black Commissioners? 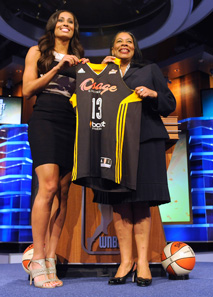 The question remains could we have a Black commissioner in any of the major professional sports leagues in the near future?

With the recent controverseries in the NFL, support is growing for a campaign to draft former Secretary of State Condoleezza Rice as a replacement for Roger Goodell for the top seat in the National Football League.

In Major League Baseball, Bud Seilg is stepping aside in January after 30 plus years as baseball commissioner, and with the recent appointment of Rob Manfred as baseball’s new boss, will a person of color ever be considered for baseball’s top post?

In the NBA, Adam Silver has already made his mark in basketball’s top position after succeeding David Stern’s 30 years at the helm in a league that has 80 percent Black players.

In the National Hockey League, while the percentage of Black hockey players is less than five percent, the sport is growing among Blacks especially those who come from other countries such as Canada and France.

While that question still remains for the other major professional sports, the answer to that question has been answered in women’s basketball.

Laurel J. Richie is the President of the Women’s National Basketball Association (WNBA).

Despite challenges in women’s basketball with a majority of the USA’s best women’s players playing overseas, next year the WNBA will be entering into its 19th season in a 12-team league.

The WNBA as a league financially and competitively are in good shape and against a lot of odds, currently, there are no issues involving ownership of the teams and six of the 12 teams could end up making a profit from the 2014 season.

“I think we have seen the same attention from Brittney and from Elena, to not only to arrive as perhaps the most heralded rookie class in WNBA history but with one season under their belt, each one of them did incredible work in the offseason to take incredible [gains] and take them up to the level necessary to be competitive in the WNBA,” Richie said.

“The WNBA is comprised of the best female basketball players in the world and I’m looking forward to working with these talented women as they strive to achieve their professional goals both on and off the court,” said Richie. “I am fortunate to have worked with an organization as inspiring as Girl Scouts, and I’m thrilled to have the opportunity to build upon the successes of the WNBA and help grow this league into a world-class business.”

With a long track record of developing award-winning campaigns that transform brands and drive business results, Laurel J. Richie has spent more than 30 years with various organizations and most recently served as Senior Vice President and Chief Marketing Officer for Girl Scouts of the USA.

She was responsible for the organization’s brand, communications, publishing, marketing and web-based initiatives, and was the driving force behind the recent brand revitalization of this well-loved American icon.

“Laurel combines extraordinary marketing and brand management skills, with a tremendous enthusiasm to help evolve young women into leaders,” said former NBA Commissioner David Stern. “She joins the WNBA at such an exciting time in its history and we know her expertise will be key to continuing the growth and success of the league.”

And so far, the WNBA is in the best shape it’s ever been.

But she credits the words of her father of 88 years, Winston, echoing at her at every decision, every obstacle, and every turning point.

Winston Richie now needs a walker to shuffle through his Beachwood, Ohio home, but the retired dentist could still fill the pages of a book with the quotes he repeated to his son and three daughters to inspire and educate them.

Entering her fourth year as WNBA president, Laurel J. Richie is thankful for the trailblazing approach she witnessed in both her parents and all the similarities that she inherited from her father.

Determination, a sense of fairness and that pioneering personality should serve her well.

That's why to this day; the words of her 88-year-old father still ring in her ears. “Things always work out best for those who make the best of the way things work out.”