Violence in Sports: Will Athletes Ever Learn? 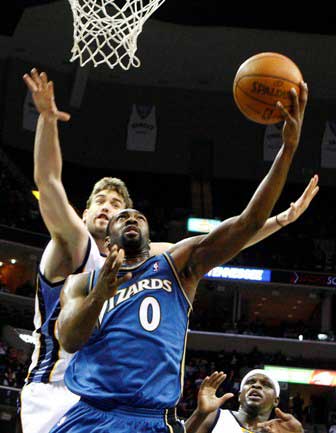 Violence in sports committed by athletes, especially when guns are involved, can affect and even end careers. Even an athlete’s freedom could be at risk.

Ask New York Giants receiver Plaxico Burress, who in 12 months went from Super Bowl hero to prison inmate without his gun leaving his pocket. Now, Washington Wizards guard Gilbert Arenas is facing questions by authorities for bringing a gun into the locker room, ostensibly to impress a teammate who had lost money to Arenas in a card game on a team flight and hadn’t settled his debt.

Burress, who accidentally shot himself in the leg with an illegal gun in a New York City nightclub in November 2008, was sentenced to two years in prison in late September. His best case scenario is for release in May of 2011, meaning he will have missed two football seasons. He will be 34 by the time the 2011 season starts, which is on the old side for receivers not named Jerry Rice. His playing career is likely over.

Arenas brought two unloaded guns into the Wizards practice locker room on Dec. 21. Reportedly, this was the upshot of a back and forth exchange on a team flight between Arenas and Javaris Crittenton where Crittenton had jokingly threatened to shoot Arenas in his surgically repaired knee.

Arenas has issued the following statement:

“As I have said before, I had kept the four unloaded handguns in my house in Virginia, but then moved them over to my locker at the Verizon Center to keep them away from my young kids,” the statement read. “I brought them without any ammunition into the District of Columbia, mistakenly believing that the recent change in the DC gun laws allowed a person to store unloaded guns in the District. On Monday, December 21st, I took the unloaded guns out in a misguided effort to play a joke on a teammate. Contrary to some press accounts, I never threatened or assaulted anyone with the guns and never pointed them at anyone. Joke or not, I now recognize that what I did was a mistake and was wrong. I should not have brought the guns to DC in the first place, and I now realize that there’s no such thing as joking around when it comes to gun—even if unloaded.”

Despite the contrition, Arenas has put his own career and the Wizards’ season in jeopardy. He has been called into a series of meetings with federal authorities, and recently was suspended indefinitely by NBA commissioner David Stern.

Arenas is one of the best players in the league and the focus of the Wizards offense. He has started all 31 games in which he has played, averaging nearly 23 points and seven assists per contest. Some veteran observers of the NBA expect Stern to show his aversion to violence in sports by suspending Arenas for the remainder of the season. This would cripple the Wizards, a team with playoff aspirations going into this season, and potentially force the team into a series of personnel moves.

Despite the ignorance that created this mess, Arenas is aware of the affects of his actions and has expressed regret. “I am very sorry for the effect that my serious lapse in judgment has had on my team, my teammates, the National Basketball Association and its fans,” Arenas said. “I want to apologize to everybody for letting them down with my conduct, and I promise to do better in the future.”

Unfortunately for the Wizards, their fans, those holding tickets to see Arenas and his team play, and especially the African American youth who see Arenas as a role model, Arenas’ brush with violence in sports is very likely to put that future on hold, and could temporarily cost him his freedom.