What are the Best College Basketball Teams to Not Win Title? 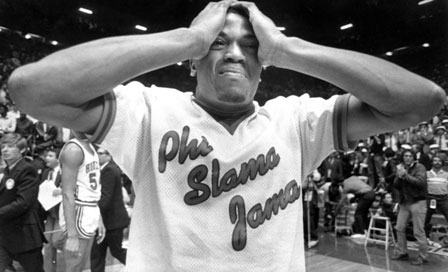 The big brothers of Phi Slama Jama (Houston chapter) are one of the best college basketball teams without a championship (AP Photo/Houston Chronicle, Larry Reese).

Best College Basketball Teams that Didn’t Win It All

The one-and-done nature of the NCAA Basketball Tournament is both the blessing and the curse of March Madness. The blessing is that there are exciting upsets and near upsets in continuous elimination games. The curse is that the team that has shown to be the best through four months of play often watches while someone else cuts down the nets.

Regal has put together its list of the best college basketball teams that did not leave the big dance with the big trophy. Of course, these lists are subjective and we welcome your feedback.

Kansas 1957: The Wilt Chamberlain-led Jayhawks were heavily favored in the championship game against North Carolina. Chamberlain was a spectacular force with unprecedented athleticism for a player his size. He ran the 100-yard dash in 10.9 seconds, shot putted 56 feet; triple jumped more than 50 feet, and won the high jump in the Big Eight track and field championships three straight years. On the court he averaged nearly 30 points and 19 rebounds per game and became the focus of every opponent.

In the title game, North Carolina triple teamed Chamberlain and stalled (held the ball without shooting for extended periods) whenever they could. As a result the game was very low scoring and went into the first overtime tied at 46. Each team scored just two points in the first overtime before North Carolina prevailed on turnovers and foul shooting in the second overtime, 54-53. Chamberlain said this loss was the most painful of his basketball career.

Maryland 1974: The Terps did not even make the NCAA tournament, as they did not win the Atlantic Coast Conference tournament towards the end of an era that allowed only one team per conference into the big dance. Maryland had one of the great teams of all time and lost in overtime 103-100 to eventual National Champion North Carolina State. Maryland was loaded with future NBA stars like Len Elmore, Tom McMillen, and John Lucas and was coached by Hall of Famer Lefty Driessell. The fact that Maryland, ranked in the top five all season and could not play in the NCAAs led to at large berths and an expansion of the tournament the following season. One could say this game was the precursor to the NCAA Tournament as we know it today.

“We played until the last drop of blood was left on the floor,” said Tom Roy, who was Maryland’s top frontcourt reserve. “It was a fierce, combative game with a lot of super players.”

Houston 1983: For lots of folks born in the late 1960s and early 1970s, the Phi Slama Jama squads from the University of Houston played basketball with both a flair and a dedication to winning that was truly singular. Future NBA Hall of Famers Hakeem Olajuwon and Clyde Drexler set the pace of the runningest, dunkingest team in the country. Their coach was Guy Lewis, who with Elvin Hayes had been frustrated by John Wooden and Lew Alcindor’s UCLA team 15 years before in a quest for the National Championship.

The 1983 Cougars were 31-2 and ranked number one going into the title game against Jim Valvano’s Cinderella North Carolina State squad. The Wolfpack had won a series of come-from-behind contests to get to the title game following a fourth place regular season finish in the ACC. The only reason N.C. State was in the tournament was that it had won the ACC Tournament. Until then, Valvano’s most famous team was ticketed for the NIT.

Houston shot poorly in the championship game, and also had some bad luck. The winning basket was a dunk off a long air ball as time expired. Though it was pioneered largely in the ABA, Phi Slama Jama is widely credited with popularizing the frenetic, “above the rim” style of play that pervades college basketball to the present day.

Phi Slama Jama achieved its greatest prominence at a time when the overall popularity of basketball was burgeoning. Their entertaining style of play appealed to a broad audience, and helped to bring many casual fans to the sport.

Ironically, Phi Slama Jama’s title game loss to North Carolina State is widely considered their most immediate contribution towards putting NCAA basketball on a par with college football in terms of television viewership and revenue. The Cougars’ last-second loss in the final was an iconic moment in the history of March Madness that helped to establish the NCAA Basketball Tournament as a major television event. The CBS broadcast of the 1983 Final between Houston and N.C. State drew 18.6 million households, a record at the time.

Georgetown 1985: That year’s NCAA title tilt marked the Hoyas’ third trip in four years to the NCAA Championship game. In 1982, Patrick Ewing’s freshman year, they lost to North Carolina when Fred Brown infamously passed the ball to James Worthy in the waning seconds and in 1984 the Hoyas beat Houston. The 1985 squad was ranked number one in the nation and was heavily favored to beat unranked Villanova, an eight seed in the southeast regional, in the title game, but the Wildcats shot a record 78.6 percent from the floor (22 for 28) to upset the Hoyas 66-64. Both teams were from the Big East, and Georgetown had topped Villanova twice earlier in that season. ESPN ranks this game as the third biggest upset in the history of sports.

Michigan 1993: The Fab 5 helped popularize long shorts, cool confidence and assassin-like efficiency on the basketball court. Today, they are best remembered for playing fast and loose with the rules regarding payments to college basketball players and the inability of Chris Webber to realize the Wolverines were out of timeouts as the clock was winding down in the team’s NCAA Title Game loss to North Carolina.

Duke had clobbered Michigan in the 1992 NCAA Finals when the Fab 5 were freshmen, but the conventional wisdom held that the Fab 5 had matured and were ready to take their rightful place at the top of the basketball world. Not only did North Carolina play a more controlled, disciplined game to win the championship, but recruiting allegations forced Michigan to vacate all its wins in the 1992-1993 season. One can almost say that Michigan basketball during the Fab 5 era was the best college basketball team to never exist.

There you have it; Kansas, Maryland, Houston, Georgetown and Michigan are Regal’s candidates for the best college basketball teams that did not win a championship. What teams are on your list?