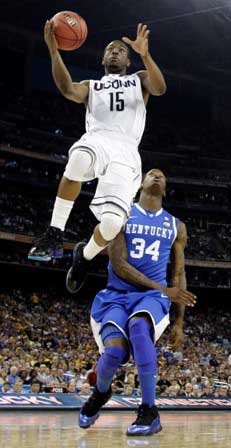 For the Basketball Purists

If you are a basketball purist, the semifinal matchup between Kentucky and Connecticut is how the NCAA Final Four 2011 championship game should work out.  But in the year of the underdog, two perennial powerhouses like the Wildcats and the Huskies have had their improbable run somewhat overshadowed by the other two schools.

Nevertheless, these two teams were also overlooked and overshadowed leading up to the NCAA Final Four 2011.  Kentucky’s fabulous class of freshman in 2009-10, which included John Wall and DeMarcus Cousins was predicted to make the Final Four but failed.  Furthermore, Coach John Calipari had to deal with the death of his mother on the way to their NCAA Final Four 2011 appearance.

Their counterparts from UConn had to ride the fantastic talents of star guard Kemba Walker and win nine games in 19 games to make it to the NCAA Final Four 2011, while attempting to tune out a recruiting scandal involving Coach Jim Calhoun and a former Huskie prospect.

“It’s special.  We’ve been through a lot of ups and downs this season, but we all stuck with each other and we’re in a great position right now,” said Walker.

UConn’s Tyler Olander got the Huskies on the scoreboard first with a jump hook, but was quickly answered by UK’s Terrence Jones.

Even non-basketball fans know the key to stopping UConn is stopping Walker and early in the game they made him struggle to get up shots.  Nevertheless, you can never stop a great player, you can only contain him as Walker scored six straight points to give UConn a 17-12 lead halfway through the first half.

A three-pointer by Brandon Knight kept the Wildcats in the game and a layup by Jones cut UConn’s lead to 21-19.

A Charles Okwandu dunk off a Shabazz Napier pass gave UConn a 25-19 lead with five minutes remaining in the first half and dunk by Roscoe Smith pushed the lead to eight points.  A Jeremy Lamb layup gave Connecticut a comfortable 10 point lead with three minutes remaining.

The Huskies took a 31-21 advantage to the locker room at halftime, with momentum on their side.  Despite the double digit deficit, Kentucky was able to hold Walker (3-8 shooting) and Lamb (despite shooting 4-5 from the field) under double figures in scoring during the first 20 minutes of their NCAA Final Four 2011 game.

Kentucky’s prized freshman Knight showed the grittiness that created his superstar status, but he struggled also from the field, attempting 11 shots and making only three, finishing the first half with only seven points.  His freshman counterpart, Jones, lead the Wildcats in scoring with nine points in the first half.

The second half began with defense deflections by both squads.  Knight rebounded from his poor shooting first half with a trey to cut the lead to seven points.  Darius Miller added a second three pointer for the Wildcats and the lead was suddenly only four less than two minutes into the second half.

Josh Harrelson secured a rebound, scored on the put back and was fouled, cutting the lead to two at 31-29, despite missing his free throw.  Smith stopped the bleeding for UConn by hitting a jumper on the wing to push the lead back up to four points with 16 minutes remaining in the game.

A Doron Lamb three pointer finally gave the Wildcats a brief lead at 35-33 before UConn’s National Player of the Year finalist, Walker, answered, tying the game at 35.

The game would stay close going into the last 10 minutes.  After Walker scored on a coast to coast layup, UConn led 52-48 going into the final four minutes of the game. With less than a minute remaining, UConn was clinging to a 54-51 advantage.

Napier turned the ball over to Kentucky with 16.6 seconds remaining in the contest but the Wildcats failed to capitalize and UConn held on for a dramatic 56-55 win in the NCAA Final Four 2011.

If you are a basketball purist, you are probably not used to names like Kemba and Shabazz, but in the year of the underdog it is only fitting that the championship game will feature a big dog versus a little dog.