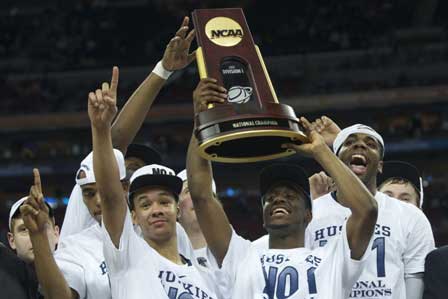 This is the moment that all basketball players dream of.  When you were a child shooting hoops in your driveway, you would always countdown in your head and imagine hitting a shot at the buzzer that would transform you from anonymity to cult hero in the matter of moments.

The 2011 NCAA Final Four came to a conclusion Monday night at Reliant Stadium in Houston, pitting basketball royalty, Connecticut, versus the ultimate Cinderella in Butler.

Could the Cinderella story occurs twice in as many years or would UConn’s Kemba Walker be too much to handle for Shelvin Mack and the Bulldogs?

From the outset, the atmosphere at the 2011 NCAA Final Four championship game was electric.   The game would pit the experience of Butler versus the undeniable athleticism of UConn.

Tyler Olander got UConn on the scoreboard first and grabbed an early defensive board after Chase Stigall missed his first shot.  Stigall quickly responded with an early three pointer.

Early in the first half both team traded buckets, with the game tied at six points, five minutes into the championship game at the 2011 NCAA Final Four.

Coming off a strong screen, Walker scored his first points on a midrange jumper with 13 minutes remaining in the first half.  He followed that with a three pointer the old-fashioned way, with a coast to coast layup and a foul shot.

With 12 minutes remaining, UConn had taken a four point lead, at 13-9, making it appear they were the more experienced bunch, not their counterparts from Indianapolis.

Halfway through the first half, Mack finally got in the scoring column with one foul shot, bringing Butler to within one point of UConn, 13-12.

Despite stifling UConn defense, Stigall gave Butler a 16-15 lead with a three pointer with seven minutes remaining in the first half of the 2011 NCAA Final Four title game.

After UConn took the lead back briefly, Mack tied it for Butler, 19-19, with a big time three point field goal. Mack followed that by hitting a clutch three pointer at the buzzer, ending an ugly first half for both squads.

At the half Butler had a three point advantage over UConn at 22-19; Butler shot a horrendous 22 percent from the field, while UConn did slightly better with an almost equally horrendous 29 percent shooting display, going 0-5 behind the three point line.

With only 19 points at the half, UConn tied a record of futility, with the lowest point total in a half by any team since 1960.  The combined 41 points was the second lowest, behind the 1945 title game featuring Oklahoma State and North Carolina.

“We’ve been down that road before throughout this whole tournament. We’ve been down, and we never lose our composure. I think that’s the greatest thing about this team – we never get rattled,” Alex Oriakhi said about the slow start by the Huskies.

However, Mack was able to give his team a lift in the first half of the 2011 NCAA Final Four championship game by shooting 2-5 from behind the three point arc.  Both stars went to intermission with seven points apiece.

Walker jumped out of the second half gate quickly, hitting a jumper along the baseline.  And with a Jeremy Lamb trey, UConn was back on top 26-25 less than three minutes into the second half.

On the other hand, the nerves that Butler displayed at the beginning of the game seemed to return as they missed open shots and Smith and forward Matt Howard were consistently outmuscled in the paint by UConn’s big men, Oriakhi and Charles Okwandu.

“We knew Butler was a great team, because they wouldn’t be here if they weren’t. I knew (Matt) Howard was definitely a great player because he’s been leading his team throughout, so I just tried to put as much pressure on their bigs as possible and just try to alter shots, and I was able to do that,” said Oriakhi

After a Lamb layup on alley-oop pass, UConn had extended their lead to 37-28 nine minutes into the second half.  Walker then added an acrobatic layup to push the lead to eleven with 10 minutes left to play in the 2011 NCAA Final four championship game.

After a couple of misses by Butler’s Shawn Vanzant it became obvious that the thought of coming up short in another championship game was setting in for the Bulldogs.

Although this was the moment that Butler, and many who cheer for the underdog, had hoped for, it became the night Walker’s supporting cast stepped in for their one shining moment.  Butler would finish the night shooting a woeful 18.8 percent from the field.

The play of freshman Lamb and sophomore Oriakhi provided just enough for UConn to claim their third title in three championship game appearances with a 53-41 victory.

Walker was named Most Outstanding Player of the 2011 NCAA Final Four, scoring 16 points in the championship game.