Butler Will Play for Title in Houston Final Four 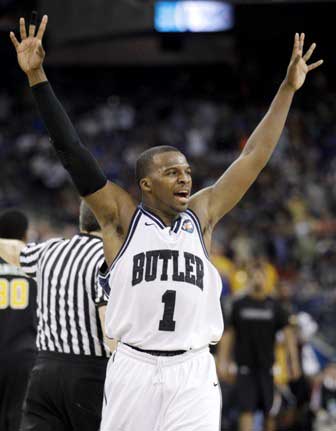 In an underdog city, the ultimate underdog, Virginia Commonwealth University (VCU) squared off against the underdog of 2010, Butler University, in the first semifinal game of the Houston Final Four.

Never mind the fact that many felt VCU would not even win their First Four game, many did not even believe they belonged in the newly-expanded field of 68 NCAA tournament teams.  The somewhat anonymous school and it’s 33-year-old coach with the historical name, Shaka Smart, have epitomized what the NCAA tournament is all about and that it is even the overlooked and underrated can rise to the top and prove that anything is possible with motivation and faith.

“Our guys, no matter who we go out there against, they believe we can win, they believe we’re going to win,” said Smart.  “That was put to the test (in the regional finals) against Kansas.  The day before in the media session, people basically asked us why we were even showing up for the game because they had determined it was going to be Kansas that won the Southwest Regional.

“Fortunately our guys didn’t agree with that sentiment and they’re the ones that went out there on the court and played.”

Last season, Butler, and now 34-year old coach Brad Stevens was fortunate enough to have the same belief as their current Houston Final Four semifinal counterparts and came within a desperation shot that almost went in from winning the national championship over perennial Goliath, Duke.  That experience from 2010, provided the Bulldogs with little comfort coming into the Houston Final Four to tale on the flaming hot VCU Rams.

“I don’t think it plays a big role at all,” Stevens said about last year’s championship game run.  “Last year we were at home.  We had every reason to be distracted.  We had never been to a Final Four.  A basketball game could easily have broken out in the middle of a circus.

“Our guys were focused all week and played great both games.  It’s hard for me to say that experience plays a great role in how you play.  Last year we didn’t have any and played great.”

Nevertheless, at the onset, the Bulldogs looked at ease, as Butler’s Shelvin Mack buried the first two baskets of the game while VCU looked like the pressure was affecting their much talked about swagger.  However, VCU quickly recovered with two jumpers by Bradford Burgess, and one by Jamie Skeen.

Smart’s energetic coaching style and the helter skelter play of the Rams seemed to be a bad fit for Butler’s finesse game, but that 2010 experience proved beneficial for Butler as they tied the first game of the Houston Final Four halfway through the first half at 15-15.

Both teams continued to battle throughout the first half as the referees swallowed their whistle and allowed physical play even though Butler was awarded 13 foul shots, making 11.  Matt Howard secured an offensive rebound and scored on the follow to give Butler a 34-28 lead going into halftime.

As the second half began, Butler seemed to lose the momentum they had going into halftime as VCU inched to within one point of the Bulldogs, with a score of 34-33, before pulling ahead 35-34 on a Juvonte Reddic jumper.

The hot shooting of Butler’s Zach Hahn kept the Bulldogs in the game.  Back to back three-pointers from Hahn gave Butler a 42-41 lead.

“Zach did a great job this year…He stayed positive.  Me and my teammates are doing a great job giving him the ball where he can have success,” said Mack.

Mack hit a big trey with 11 minutes left to give Butler a four point lead, 47-43.  Mack went on to score five straight points after Skeen’s two free throws made it a one possession game, stretching Butler’s lead to seven points at 52-45.

However at 9:22 remaining, Matt Howard was forced to the bench with his fourth foul in the Houston Final Four.  Nevertheless, Mack would almost single-handedly keep the Bulldogs barking finishing with a team high 24 points. Shawn Vanzant would hit a key trey and Howard scored on another crucial put back to put the game away for the small school from Indianapolis, shocking the basketball establishment for the second straight year with a 70-62 semifinal win.

And it is almost certain that the college basketball establishment will continue to be rocked to its core, if undergo stories of Butler and VCU become commonplace.

Regardless of television ratings and all of the non-athletic factors that go into a big spectacle like the NCAA tournament, the 2011 Houston Final Four will probably always be remembered as the year the ultimate “David” or underdog finally flexed its muscle in the ultimate underdog city and the entire world finally got to see that they could all “stomp with the big dogs” of the world and hold their own.