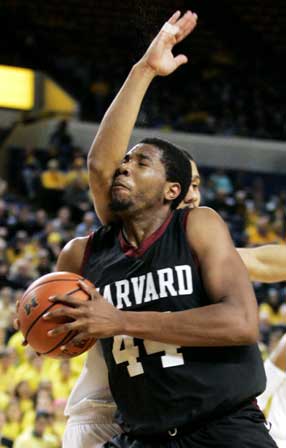 Forward Keith Wright (44) is one of the star players for the upstart Harvard basketball program (Duane Burleson/AP Photo).

Harvard’s basketball team won a share of its first Ivy League title this week, ending 55 years of futility. On Saturday, the Crimson will seek to make its first trip to the NCAA Tournament since 1946 when it takes on Princeton in a tiebreaker game at Yale.

Harvard hoops is led by Tommy Amaker, the Duke star and former assistant who found his niche at Harvard in 2007 after achieving moderate success as a head coach at Seton Hall and Michigan. Amaker has recruited a core of African American underclassmen that should keep Harvard basketball near the top of the Ivy League for the next few seasons.

This year’s Crimson squad featured four African Americans in starring roles. Junior Keith Wright and sophomores Brandyn Curry, Kyle Casey and Christian Webster were leaders for the Ivy League champions, and all are expected to return to defend the crown.

Curry has started every game for the Crimson this year and was named the Ivy League’s top defender. A 6-1 guard, Curry averaged nearly 10 points per game and more than six assists. His third double-double of the season against Princeton on March 4 earned Harvard its share of the Ivy title. He is also a member of the National Honor Society and the National Technical Honor Society.

A 6-7 forward, Casey was a preseason All-Ivy selection and backed that up with a solid season for Harvard. Casey averaged better than 13 points and six rebounds in league play, including a clutch 24 point effort in the March 4 Princeton game. He was voted most improved player his freshman year. Curry played four years of varsity basketball in high school and was a McDonald’s All America nominee.

Webster is a 6-5 guard who was second in scoring for Harvard with 13.3 points per game. He is the Crimson’s three-point specialist, having hit at least three treys in ten games this season. He had a season high 22 against traditional rival Yale and also had a big game against Princeton last week with 14 points. Webster was the Maryland basketball player of the year in 2009 and also played varsity football in high school.

The old man among Harvard basketball’s African American elite is 6-8 junior forward Wright, who is also a team co-captain. He leads the Ivy League in games with double figures in points and rebounds with 12 (of a possible 14) and leads the Crimson with 49 blocks this season. He was honored as Ivy League Player of the Week in late November. He also had a big night against Princeton on March 4 with six blocks and 13 points on 5-6 shooting. Wright keeps Curry company in the National Honor Society.

Basketball diversity is part of an overall trend at Harvard, where about 10 percent of the student body is African American.

The man who put the basketball program together is Amaker. After winning two NCAA titles as an assistant coach at Duke, Amaker led Seton Hall to the Sweet 16 in 2000 and won an NIT title for Michigan in 2004. His experience in selecting players includes a stint on the USA Basketball committee that picked the 1996 Olympic gold medal squad.

As a player, Amaker started at point guard for four seasons at Duke, including an appearance in the 1986 NCAA title game. He was an All American selection in 1987 and was drafted that year by the Seattle Supersonics. He is a member of the Duke Athletic Hall of Fame.

A win on Saturday will take Harvard basketball to new heights. And next year figures to be even better.