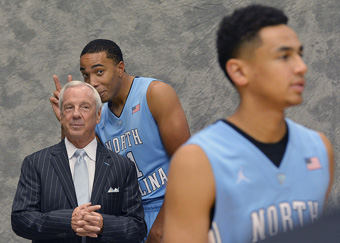 2016 Final Four: Houston, We Finally Don’t Have a Problem!

For 21 years, people have misquoted the famous line from “Apollo 13,” which stated, “Houston, we have a problem.”

In the film, Houston was not the problem but the problem solver.  Nevertheless, people do not understand that point.

However, Houston did have a problem during the 2011 Final Four because many of the standout college basketball programs were noticeably missing, replaced by the likes of Butler and VCU (no offense to those fine programs).

But for the 2016 Final Four, Houston has solved that problem from five years ago with powerhouse programs like North Carolina, Syracuse, Oklahoma and Villanova taking the court.

In anticipation of a great 2016 Final Four, RegalMag.com recently sat down with coaches Roy Williams (North Carolina), Jim Boeheim (Syracuse), Lon Kruger (Oklahoma) and Jay Wright (Villanova) to get their opinion on the 2016 Final Four.

Regal to Roy Williams: You’ve mentioned this team is one of your favorite teams that you coached.  What makes this team so special, in particular Marcus Paige?

Roy Williams: When you have a team full of seniors, not full, but three seniors like Marcus, Brice (Thompson), Joel James, you build up relationships.  Four years, you can build great relationships with kids.  You want them to feel rewarded.  I feel like we won 25, 26, 24, the first three years here, so they won 75 games in their first three years but we haven’t gotten the ring.  Marcus said something in front of the team this year.  Guys, we haven’t gotten a ring since we’ve been here.  Trying to have dreams and goals for kids, seeing them reach those, how they made sacrifices to do those kind of things is special.  With Marcus particularly, the injury problems he’s gone through for the last couple of years, yet he’s continued everyday to try to be the best Tar Heel he could, best teammate he could, helps us in every way.  Brice accepting my push and push and push for all of those years.  See what he’s been able to blossom into.  Joel being one of the greatest stories in college basketball from a student-athlete standpoint makes them pretty special.

Regal to Lon Kruger: Coach, everybody knows we’re in a culture of one-and-done in college basketball.  What does Buddy Hield’s success over four years say to high school kids coming into the college ranks in the years to come?

Lon Kruger: Hopefully Buddy serves as a poster child for those guys that are thinking of coming out and are not sure.  The sad part of all of that, the majority of guys that come out early don’t play in the NBA.  People see those that do.  But the value of coming back is not just to improve your draft status, but a year more mature, a year stronger, a year better player, a year better positioned to have success when you do go.  Buddy is a smart guy…He said, Hey coach, a year from now I’m going to be a lot better…I’ll be more able to secure a long career in the NBA.

Regal to Jim Boeheim: I kind of compare your (Syracuse) comeback win to Texas A&M’s comeback win against Northern Iowa.  How do you balance allowing your team to celebrate versus getting back to work and focus on North Carolina?

Jim Boeheim: We had a great comeback win against Gonzaga and got back to work two days later against West Virginia where we needed another comeback win.  We’ll be ready.  That game has nothing to do with the next game.  We live in the future here.  What you did yesterday, what you’re doing right now doesn’t matter.  It’s what you do in the next game.  I think our players will be ready for that.  I wouldn’t compare our comeback to Texas A&M.  I couldn’t compare anything to that.  That’s incomparable (laughter).