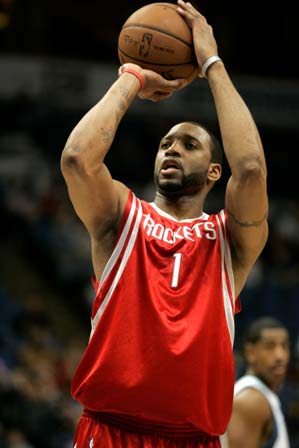 T-Mac making a difference on the court and in society. (Paul Battaglia/AP)

Sports fans are constantly bombarded with images of athletes misusing their celebrity.  From Adam “Pacman” Jones to Michael Vick, mainstream media consistently glorifies the negative behavior of some athletes, especially those of African descent.

However, African American athletes who make a difference in their communities through their various foundations or those who are simply good role models on the court or field are often ignored in favor of those in handcuffs.

Despite the lack of major publicity, Houston Rockets All-Star guard Tracy McGrady is determined to lend his time and celebrity status to the crisis in Darfur, in attempt to persuade others to assist in attempts to stop the genocide in Sudan.

“My foundation has been very successful in helping a lot of people, but I knew there was one thing I needed to do; I needed to go to Africa, specifically Darfur,” McGrady wrote on his website t-mac.com.  “I wanted to see what was happening there.  Why were so many dying?  What is the genocide all about?  Who were the faces behind the statistics?  I didn’t want to stand by and watch it all on CNN.  I needed to see it for myself.”

What McGrady saw as a result of the crisis in Darfur changed his life and his purpose.  “It wasn’t that long ago that I wasn’t sure about what Darfur was, where it was, and why terrible things were happening there,” he wrote.  “So I figured if I didn’t know, I could learn and bring back these stories to other people who also didn’t know.”

What he learned is captured in a new documentary that the hoops star hopes will change the crisis in Darfur for the better.

According to PBS.org, Darfur is a region in the western portion of Sudan bordering Chad, and is about the size of Texas.  Since the start of the civil war in 1983, over four million Sudanese have been displaced and two million have lost their life in the conflict.

The crisis in Darfur began when the war started because of the military’s effort to enforce Islamic law on the entire country of Sudan.

In the past six years, the genocide have left an estimated 50,000 to 80,000 deceased and approximately 1.2 million to two million displaced as a result of the crisis in Darfur.

PBS.org also reports that approximately 200,000 Sudanese have escaped the conflict by relocating to Chad, but are forced to live in refugee camps where the temperature regularly reaches over 100 degrees Fahrenheit.  In addition, 2.3 million people in Darfur are in need of emergency aid, but the government as well as rebel forces have kept them from receiving food and medical supplies.

In an effort to assist displaced by the crisis in Darfur, McGrady is opening up a secondary school to educate the children that have been affected, some who have not been able to attend school in four years.

T-Mac, as he is affectionately called throughout the National Basketball Association, funded the construction of the school, funded the training of teachers and provided school supplies for one year.  He has also encouraged his old school, Auburndale High School in Florida, to become a sister school.  They are doing their own fundraising and are also contributing school supplies.

Although McGrady knows that his efforts are just the beginning, he encourages all to become involved in stopping the crisis in Darfur by visiting www.enoughproject.org.  For more information contact your local politician and encourage them to get involved as well.