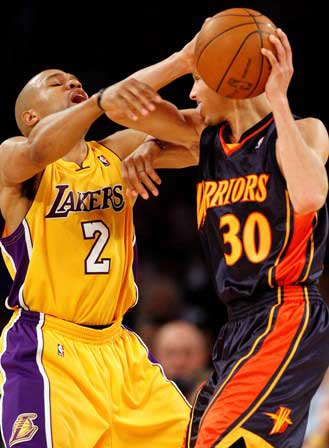 Stephen Curry (30) gets an elbow in the face of Lakers guard Derek Fisher (2). (Jason Redmond/AP)

At age 21, rookie Stephen Curry is half of one of the most dynamic backcourts in the NBA, with Monta Ellis, for the Golden State Warriors. With the team winning fewer than 30 percent of its games, the rise of Curry and comparisons with his father, former NBA star Dell Curry, are about all Warrior fans have to cheer about.

Both of Stephen’s parents were star athletes at Virginia Tech, Dell in basketball and his mother Sonya in volleyball. Despite his parentage, Stephen Curry was snubbed by the Virginia Tech Hokies. Virginia Tech was willing to admit Stephen to school, but would only allow him to tryout for the basketball team without a scholarship as a walk-on.

The attention Stephen Curry gained at Davidson propelled him into the first round of the NBA draft, where he was the ninth overall selection by the Warriors. He will earn a $2.7 million salary this season.

“He’s still playing to prove to people that they were wrong, that they missed his abilities and skills,” Dell Curry told ESPN. “I think everybody will tell you they were wrong, but it’s good to have a chip on your shoulder when you play sometimes.” The elder Curry played 16 years in the NBA and was the league’s Sixth Man of the Year in 1994.

Dell Curry even broadcasted a game involving his son in his role as a radio analyst for the Charlotte Bobcats. For Stephen Curry, that was nothing new. “Well, he’s been there my whole life,” the younger Curry said. “I think the things I do on the court kind of come from him, so he’s in my head during the game and I like to keep him involved.”

Stephen Curry has done a lot to make his dad proud this season. As of Feb. 22, he had started 52 games for the Warriors, averaging 15 points, five assists and four rebounds per game. On Feb. 10 he had his first triple double; 36 points, 13 assists, and 10 rebounds in a blowout win against the Los Angeles Clippers.

It’s easy to see that Stephen Curry is learning the ways of the NBA just fine in his first professional season. When he does call his dad, they usually talk about other things than basketball. “I was a basketball kid. I’ve been doing this all my life,” the Warriors’ Curry said. “Even though he did play 16 years in the NBA, it’s stuff I can figure out on my own.”

Stephen Curry’s number 30 with the Warriors is the same number Dell Curry wore most of his career. The elder Curry, who finished his NBA career in 2002, is listed as two inches taller and 20 pounds heavier than his 6-3, 185 pound son. And while it is impossible to predict a 16-year career for Stephen at this point, he has already become a regular starter and is scoring at a greater clip than his dad who averaged just less than 12 points per game for his career.

If the current trend turns into a career line for the younger Curry, it won’t be long until Dell is thought of mostly as Stephen Curry’s father.