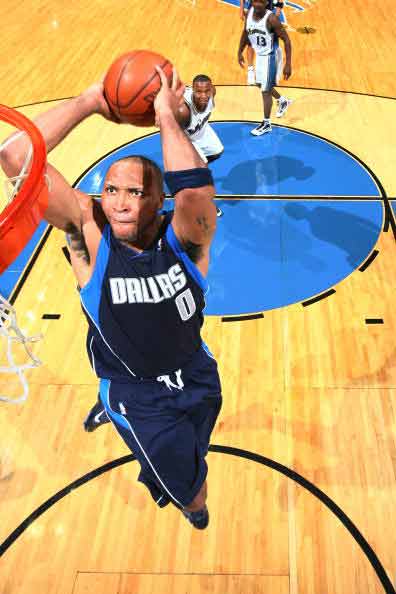 From Tribulation to Triumph

Shawn Marion knows exactly what it feels like to struggle.  The 10-year NBA veteran knows how it feels to spend days hungry while his mother, Elaine, worked her fingers to the bone so she could raise four children as a single mother.  He knows how it feels to have sneakers so old and worn that he had to avoid puddles so that the socks protruding through the soles of his shoes would not get soaked because his mother could not afford new sneakers.

Marion also knows the odds that were against him as he set his sights on a career in the NBA as a high school student.  He remembers the naysayers and the distracters that discouraged his dream from junior college at Vincennes to his junior season at UNLV.  But most vividly, Marion remembers when his dream became a reality and he was able to bless his mother with a brand new house, in commemoration for all she had done throughout his early years.

“Your dreams come true, you’re drafted into the NBA and all of a sudden you have the money and the means to buy something, so why not buy your mother a house,” said Marion.

When speaking of his mother, it is apparent that he understands that his dreams could not have come true without the sacrifices of this wonderful woman.

“She was trying to put food on the table to feed us,” Marion told Regal Magazine.  “She was a strong woman.  She worked three jobs for a long time.  I didn’t always have everything I wanted, but I was good.”

It is that same memory that led to the formation of the Shawn Marion Foundation, which assists single-parent families through vocational training and adult scholarships, in an effort to help and inspire people who are experiencing similar situations.

“Four kids, being a single [parent], you’re definitely gonna need support,” Marion added.  The support that his family needed growing up is the same support he is giving single-parent families through the Shawn Marion Foundation.

In many foundations, the celebrity is just the figure-head who pumps funds into the organization but usually does not take a hands-on approach.  When working with the Shawn Marion Foundation, you will definitely work with the organization’s namesake.  The reason for his involvement is simple, he has been there and he is determined to inspire others who are jumping the same hurdles to never give up on their dreams, because he is living proof that dreams do become reality.

Many criticize athletes for not taking a stance and making a difference in the communities around them, but those critics must have never met Marion, nicknamed “The Matrix” by two-time NBA champion Kenny Smith.  Through the Shawn Marion Foundation, “The Matrix” has consistently returned to his hometowns of Chicago and Clarksville, Tenn. to give back.  Turning a former drug house into a community center with an after-school program, with computers and a basketball court and giving funding to his old elementary school, which faced a budget shortfall because of declining tax revenue and rebuilding the playground for the students.

“I could give some money to someone else’s charity and let them do the work,” Marion explained.  “But that’s not the point.  The point is I grow up in poverty, it is what is.  It was times when it was really bad and it was times, it wasn’t bad.  But at the same time, I got a taste of it.”

Marion added: “I know what it feels like to grow up with the same pair of sneakers for a period of time…And to have to go to the Laundromat to do your laundry once a week.  And if you don’t have nothing in the refrigerator, you have to wait to your mama comes home to fix you something.  I know what it feels like to have nothing.  So, to come from nothing to something is a blessing.  I take none of this for granted.”

Marion speaks fondly of his humbled beginnings, recalling having only one telephone in his mother’s house and a one-hundred foot extension cord that allowed everyone in the home to use the telephone.  He recalls playing Super Nintendo in high school, never dreaming that one day he would be playing video games featuring him.

“The Matrix” remembers the statistics that were stacked against him in coming out of his school, which stated that only one in 75,000 high school basketball players actually make it into the NBA.  Although he took the road less traveled, playing two years in junior college and one year at UNLV, Marion became that “one.”

Although his dream came true, he encourages everyone to pursue their own dream.  Marion is also realistic when working with children through the Shawn Marion Foundation, encouraging all to pursue higher education just in case they are not as fortunate as him to become that “one” in 75,000.

Furthermore, he practiced what he preached while attending college, becoming male student-athlete of the year while in junior college.  The four-time NBA All-Star majored in communications while in college.

Although Marion is quick to acknowledge his blessings that led him to the NBA, he is also quick to point out the blessed career he has had playing with extraordinary talent on all three former teams (Suns, Heat and Raptors) that he has played for.  That trend continues this year as he joins the Dallas Mavericks, and is reacquainted with a former teammate from the Suns, point guard Jason Kidd.

“J. Kidd is a monster,” Marion told Regal Magazine.  “I came in with J. Kidd.  He was one of my favorite players prior to coming into the league just to watch.”

Despite playing with great players and having an All-Star career, with career averages of 18.3 points, 10.1 rebounds and 1.89 steals per game, the one thing that has been elusive in Marion’s career is that much-desired NBA championship ring.

However, with a team as talented as the 2009-10 Mavericks, this year is as good as any to put the icing on an already impressive cake.

“We have a very nice team this year.  We have an older group of guys, we’re seasoned.  Hopefully, with the group of free agents we brought in this summer, we’re gonna be decent.  We’re just trying to add to the core they have already.”

When asked what it is like working for outspoken Mavericks owner Mark Cuban, Marion replied: “(Cuban) is amazing.  He’s really a good owner.  He’s for his players, and you gotta respect that.”

For more information on the Shawn Marion Foundation and how you can become involved visit www.matrix31.com.