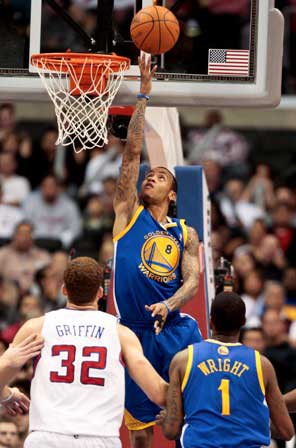 Monta Ellis of the Golden State Warriors is having another All-Star caliber season. On Feb. 3 we will find out if he will finally receive the recognition due him, or if the league and its coaches will instead give someone like Steve Nash a lifetime achievement berth in the mid season classic.

At the halfway point of the current season Ellis is averaging nearly 26 points per game and leads the NBA in minutes per game for the second straight year along with field goals made. He is the unquestioned backcourt leader of a team that is on track to win ten more games than it did last season. Ellis has never received an All-Star invitation despite averaging more than 20 points per game for his last three full seasons and usually being asked to cover the opponent’s best guard.

Warriors coach Keith Smart also sees Ellis as an emerging closer, a player that can knock down the key shot down the stretch of a tight game. “Closers are guys who have the ability to shoot the long ball or put it on the floor or be able to draw fouls, go to the line and make free throws,” Smart said to the San Francisco Chronicle. “You’ve got to have those three components.

“He’s got all three,” said Smart of his star player, adding Ellis is “getting there” as a closer.

To add it up: Monta Ellis is the best player on his team; leads the league in important categories; plays solid defense, and is becoming a go-to player in crunch time. Yet, he seems to receive less recognition than other players with fewer accomplishments.

Some say Ellis is still being punished for the moped accident that cost him about half of the 2008-2009 season. In that accident, Ellis tore a ligament in his left ankle. He first told the Warriors he injured himself playing pickup basketball. Moped riding is among the activities prohibited in standard NBA contracts and Ellis seemed to loathe dealing with the consequences.

About one month before the accident, the Warriors and Ellis agreed to a $67 million contract extension covering five seasons. Understandably, the Warriors had a negative reaction to the moped incident. The team suspended Ellis for 30 games without pay and reserved the right to void his otherwise guaranteed contract in the event his recovery was unsuccessful.

Even though Ellis did successfully recover, the poor judgment he showed by riding the moped combined with hiding the facts behind his injury to his employer may have stained his reputation throughout the league. Once his recovery was confirmed, Warriors ownership chose to reinstate his guaranteed contract. The incident was characterized as a “lose-lose situation” by team ownership representatives and the All-Star Game might be part of the price Ellis continues to pay.

Ellis, though, seems relatively unconcerned. “It’d be all right,” Ellis said to NBA Fanhouse of being named an All-Star. “But it’d mean a lot to me if we make the playoffs with making the All-Star team. … I let my game speak for itself and help my team win. …

I still got to get my team to winning.” As for the moped accident and the consequences, Ellis won’t comment. “That’s all behind me,” he said.

Ellis was named NBA Player of the Week on Dec. 27, so his reputation may be on the upswing. Next week we will see if the coaches who choose the All-Star reserves are ready to grant that status to Monta Ellis.