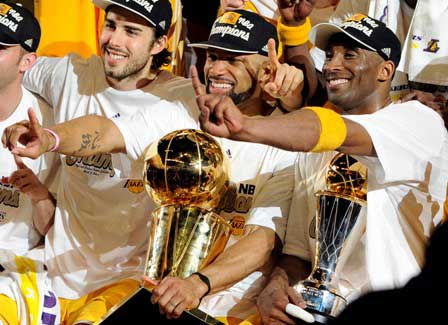 Now that Kobe Bryant has won his fifth championship ring, the discussion of where he fits in the pantheon of all time basketball greats is well underway.

He has earned more player rings than the combined total of Elgin Baylor, Jerry West, Charles Barkley, Wilt Chamberlain, and Julius Erving. As he famously noted right after the Lakers’ game seven win over Boston, Bryant has now passed Shaquille O’Neal, and he is within one of Michael Jordan. Only Bill Russell and his teammates from the Celtics teams that won eleven times in thirteen years in the 1950s and 1960s seem out of reach.

Where Bryant ranks has become a lively debate. Magic Johnson has offered to finance a statue of Kobe in front of the Staples Center, while Michael Wilbon emphasizes that we don’t pay enough attention to players whose careers ended before the ESPN era and 24-hour news cycles of the 1980s and since. NBA history, which only dates back to 1946, is much more finite than that of pro football or major league baseball, which simplifies the process. And as in all sports, winning is the bottom line.

Steve Kurzet, 52, of North Carolina is a lifelong Lakers fan and has followed basketball closely since the 1960s. He sees Kobe as a combination of the best attributes of other well-known basketball greats.

“Kobe is clearly the best player in the game today. He has merged the work ethic of a Larry Bird with the God-given talent of Michael Jordan,” Kurzet said.  “He is that rare breed of athlete gifted with unbelievable talent and obsessed with an unquenchable desire to win giving him the ability to alter the course of the game by sheer strength of will and brilliance.”

The theme of taking greatness from a prior generation and building on it is the key to Bryant’s greatness according to 84-year-old Stanley Pomerantz of Palm Desert, Calif. Pomerantz was a starter in the Rhode Island University teams of the mid 1940s that popularized the full court press and as a result of their high-scoring style became regulars at Madison Square Garden. He was a teammate of George Mikan’s on service teams during World War II and in retirement has devoted a great deal of time to watching and thinking about pro basketball.

“I started watching basketball when there was a jump ball after every basket, I played high-level college ball and I’ve been watching every since,” Pomerantz said. “What happens is that each succeeding generation of stars takes what they have seen and builds on it.

“The line that Kobe followed began with Elgin Baylor. Only the Harlem Globetrotters did the things that Baylor did as a young player. Hanging in the air and charging the lane at just 6-5 was unheard of. He was an individual player. What Jordan and Kobe have that sets them apart from Baylor and Erving is their ability to make the players around them better. Rings are a team accomplishment. To get them you have to stop playing one-on-one. Once Kobe and Jordan matured (both psychologically and physically) they became team players.

“To me the basketball greats most like Kobe and Jordan are Magic and Oscar (Robertson). Those guys played with size and they played a team game. Of the great centers Russell played the best team game, Wilt did the most outstanding individual things, and Mikan was the best of the clumsys when all big men were clumsy. Kareem (Abdul-Jabbar) was a wonderful, wonderful player and Shaq was a powerhouse of muscles whose bad free throw shooting hurt his teams.

“Kobe is the quintessential basketball player. He can do it by himself and he can do it within the framework of a team. He is as good as or better than Michael Jordan because he has been able to take what Jordan has done and build upon it as Jordan did with [Erving], Baylor and the great players that came before him.”

Mitch Shatzen, 53, a Southern California basketball fan who played guard at UC Irvine, agrees that Bryant is probably best. “Kobe’s five championships have been attained by conquering five different NBA franchises. This unique accomplishment reflects his keen ability to win regardless of his opponents’ style of play. He has clearly elevated himself to become the best player in the league today.”

Kurzet added that, “unlike King (Lebron) James and the others, Kobe has that throw back mentality and work ethic not at all common in the NBA today. Like Magic, Bird, MJ and Russell, his will and talent seem to be the difference makers more often than not.”

If you buy the notion that each generation builds on the accomplishments of the past, then Bryant probably deserves the acclaim he is receiving as the best of the best of basketball greats, if only because he has observed and internalized what has gone before him and worked very hard to build on those skills to create his version of the ultimate basketball player. There may very well be an eighth grader working very hard with the goal of eclipsing the skills and accomplishments of Kobe Bryant.