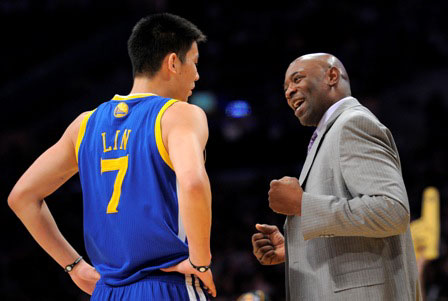 Golden State Warriors head coach Keith Smart is still probably best known for the shot that won the 1987 NCAA basketball championship for Indiana. Now, though, he is rapidly making a name for himself by leading the Golden State Warriors to respectability and perhaps even a Western Conference playoff berth this season.

The Warriors are currently 7-7 and trail only the Los Angeles Lakers in the Pacific Division. The team is on track for its first playoff berth since 2007, and the head coaching change from Don Nelson, 70, to Keith Smart, 46, is the primary difference.

Nelson seemed to hang around last year just to set the NBA record for career wins as a head coach. He left coaching the defense to Smart and often seemed disengaged during timeouts and post-game media conferences. Before this season began the Warriors paid off the last year of his contract for $6.5 million and sent him off to his hammock on Maui. Nelson’s last three NBA stops (the Knicks, Dallas, and Golden State) all ended poorly. It is doubtful that he will coach again in the NBA.

Smart, on the other hand, has brought tremendous energy to the Warriors. “Before the season began I approached each player and offered my hand,” he told KNBR, the Warriors flagship radio station. “I asked each one if they would let me coach them this season to make them better. I told them it might get rough at times, but I emphasized that it wasn’t personal, it was all basketball. If they didn’t agree, we would have to find another place for them to play. They all agreed in the presence of their peers and so far everyone has lived up to his end of the bargain.”

Keith Smart also seems to realize the importance of treating players like individuals. “Each day before I meet with the team I’ve already gone over the previous night. I’ve already asked myself ‘Who do I have to talk to?’ And I do it,” he told Monte Pool of the San Jose Mercury News. “I could put it on an assistant, but that’s like telling my wife to tell my 14-year-old son exactly what it is that I want to say.”

Keith Smart, who joined the Warriors prior to the 2003-04 season, has spent the previous seven seasons as an assistant coach with the club. Overall, the Baton Rouge, La., native has served a total of 11 seasons as an NBA assistant coach and has amassed 21 years of experience in professional basketball as either a player or coach. Prior to joining the Warriors, Smart spent three seasons in Cleveland, where he concluded his stint with the Cavaliers as the club’s interim head coach over the final 40 games of the 2002-03 campaign, going 9-31.

The Warriors have a solid lineup featuring guards Monte Ellis and Stephen Curry, power forward David Lee, and center Andris Biedrins. The question for the NBA’s Bay Area entry this season will be depth and how well equipped Keith Smart is to guide a team of professionals through the 82 game grind. An elbow injury to Lee led to two losses on a recent road trip, and Curry’s sprained ankle preceded a blowout loss to the Lakers. A look at the early returns when everyone is healthy, though, indicates that springtime playoff basketball is a distinct possibility in Oakland.