Is Dirk the NBA’s Next Great White Hope? 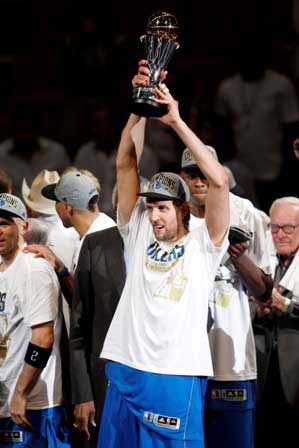 Nowitzki exorcised past playoff demons by leading the Mavericks to the NBA championship (AP Photo/Tom DiPace).

Does the NBA Need a Great White Hope to Remain Successful?

In a season that has been dominated by headlines and stories on the exploits, success, failures and overall hatred of the Miami Heat by everyone outside of the city, along comes a player who was being looked upon by many fans across the county to slay the dragon and deny the Heat an NBA title.

His name is Dirk Nowitzki of the Dallas Mavericks. The 32-year-old 7-foot power forward who is also a former NBA Most Valuable Player and perennial all-star was a force in the NBA playoffs and has been like a knight in shining armor.

Nowitzki and his Mavericks overcame the odds and defeated the menace known to all basketball fans as the Heat. Nowitzki bested the beast and was named the NBA Finals’ Most Valuable Player. He became an instant hero and legend in Dallas and elsewhere.

In a league dominated by African American players, there hasn’t been a White superstar that captivated fans’ interest; whether it is good or bad, since the legendary Larry Bird of the Boston Celtics in the 1980s.

Bird was everything a fan could want in a great White hope. He was talented, soft-spoken and most of all he won. He was a three-time NBA MVP and won three NBA championships, and a superstar in the true sense. But as NBA fans have become more diverse the question has be asked, does the NBA really need another great White hope to remain successful?

The idea of having a White superstar in the NBA is a topic that’s been discussed in the past with no real answer.

The NBA is one of the most popular and most watched sports in the world with fans of all races seen wearing the jerseys of LeBron James, Kobe Bryant and Dwayne Wade just to name a few with no real great White hope ever standing out.

Fans attending NBA games are overwhelmingly White, but some believe that is an economic issue, which is another story for another time.

The notion of a great White hope in an era where racial diversity is at an all-time high in the United States may be moot.

“We’ve come so far as a nation and as a people that needing someone great to represent your race is not an issue,” said Daniel O’Keefe, 37, a White construction worker in Phoenix. “I mean, come on! A great White hope in the NBA today’s society? Does it really matter?”

Studies have shown that Black players outnumber White players anywhere from 82 to 92 percent, with a large percentage of White players being from Europe.

The last White American to start an NBA All-Star Game was Hall of Famer John Stockton of the Utah Jazz 14 years ago. Stockton was a legendary player, but far from being an iconic player for the league.

Today along with Nowitzki, there’s Steve Nash of the Phoenix Suns, a former teammate of Nowitzki’s in Dallas. Nash is a two-time MVP and a sure fire first ballot Hall of Famer. But a great White hope? Hardly.

As popular as he is in Phoenix, Nash’s popularity doesn’t transfer to the masses like other popular NBA players. And besides, he’s Canadian.

In the past two years only Nash has one of the league’s best selling jerseys. He was twelfth in the 2009-10 season.

“[Michael] Jordan made the NBA what it is today and he was Black,” said James Daverman, 30, an African American analyst for Bloomberg in New York. “I honestly don’t think it’s an issue. I mean if a White player emerged as the most dominant force in the league he’d probably attract some of the more bigoted types who think it necessary to self identify with a player in the league but how many of those are realistically out there?

“If anything people, probably have a harder time identifying with European players they’ve never seen before coming into the league. Steve Nash won back to back MVPs and the league seemed to chug along. Nowitzki won one and again, LeBron emerged and the league chugged along. Don’t really think it will make a difference at this point.”

Others echoed Daverman’s point on the need of having a great White hope in the NBA.

“The problem that I have is that all of this is really a non-issue for true fans of any sport,” said David Waters, 52, a Unix Systems Administrator at Wells Fargo Bank in Sunnyvale, Calif., who is also African American. “So the issue is how to reach out to fans who are more interested in the issues that have less to do with sports and more to do with social identity leading to increased sales.
In other words, let’s use sports as a proxy for social conflict because actually facing real social conflict might actually lead to societal changes, right?”

Nowitzki is now an NBA champion. Not only does it place him in a class of past NBA great White hopes, but in an elite class of players that is only exclusive to the all-time best players, regardless of race.